More off than on, KU women survive tournament opener 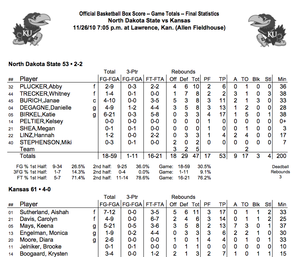 Friday night, in the opening round of the BTI Tip-Off Classic at Allen Fieldhouse, two Kansas University women’s basketball starters sank into early foul trouble, the team shot 22-of-66 (33 percent) from the floor and the Jayhawks did not make a three-pointer.

Yet, somehow, they won.

A couple of quick spurts by KU — a 10-0 run at the end of the first half and a 10-5 stretch to open the second — turned out to be the difference, and the Jayhawks (4-0) survived a first-round scare.

In the opening minute, KU pounded the ball inside to forward Carolyn Davis (14 points, six rebounds) on back-to-back possessions and looked to be trying to establish itself in the paint.

“That was the idea,” said forward Aishah Sutherland, who finished with 17 points and 11 rebounds.

However, the Jayhawks struggled to get the ball inside the rest of the night and, with sophomore guard Monica Engelman on the bench in foul trouble for most of the first half, the NDSU guards sagged off KU’s perimeter players and packed the paint.

No one was more frustrated by the Bison’s defensive alignment than Mays, who continually found herself wide open.

Instead, Mays often settled for jumpers and shot just 5-of-21 from the floor. Asked if she sensed that she shot that many times, Mays said: “Um, no. I knew it was somewhere up there, but not 21. I’ve never shot that much in my life.”

Despite the rough shooting night, Mays did a lot of other things well. She finished with a game-high seven assists and, despite standing just 5-foot-7, ripped down eight rebounds, including an offensive rebound and putback with under two minutes left that iced the game.

“She wasn’t talking herself into making the next shot, she was mad at herself for missing the last one,” Henrickson said. “She played backwards a lot.”

After falling behind by 12 points (KU’s largest lead of the night) three times in the second half, the Bison stormed back with a 9-2 run that cut Kansas’ lead to five with 5:37 to play.

After a few empty trips for Kansas, NDSU had three chances to trim the lead to a single possession, but failed each time.

KU hit 10 of 12 free throws in the final two minutes and finished 16-of-23 from the line in the second half.

KU’s nine turnovers were the fewest in a game since March of 2006, and the Jayhawks went without a three-pointer — 0-of-11 — for the first time in 23 games.

Still, Kansas was good enough to find a way to win. The Jayhawks will take on Memphis at 6 tonight in the second round, and Henrickson is looking forward to the challenge.

“It’ll test our toughness to be able to let go of that one, which, we’re young, they will,” she said. “Our freshmen will go, ‘Who’d we play yesterday?’”

As for Mays, who finished with 13 points in her first career start, she’s got an even simpler focus for tonight.