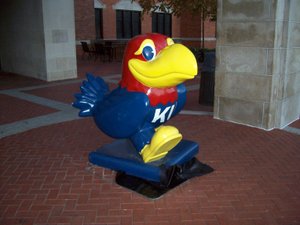 Vandals unbolted the Big Jay at the Kansas Union. The damage was discovered Saturday morning around 7:45 a.m. by KU staff. 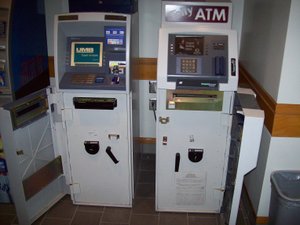 The front plates on two ATMs at the Kansas Union were reported damaged Saturday morning. 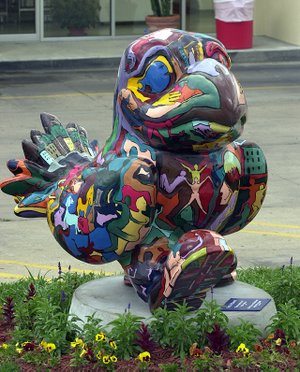 The Classic Jayhawk sculpture in front of the Kansas Union was discovered damaged Saturday morning in what could have been a foiled attempt to kidnap the statue just hours before the Kansas University football team took the field against Colorado.

The damaged bird was discovered about 7:45 a.m. by a KU maintenance employee, who then notified emergency dispatchers of the incident.

Vandalism to Jayhawk statues has been an issue since the 30 pieces of art were put on display for Jayhawks on Parade in 2003. The various versions of the KU icon have endured much in the last seven years. They’ve been blown up, had legs removed, perches toppled, accessories stolen and even been left for dead, headless in a dumpster. Bolts were removed and the statue was moved slightly in this most recent act of vandalism.

The Classic Jayhawk outside the union is not even the original. The sculpture that now greets generations of Jayhawks is a replacement. The switch was made in 2006 after attacks on the original version compromised the statue’s structural integrity. A new, stronger version was put in its place to withstand the demands of the high traffic area.

Two ATMs inside a small alcove of the Kansas Union were also damaged. The front plates of the machines were reportedly opened but it was unclear if any money had been taken.

Reports late Saturday afternoon stated the targeted Jayhawk statue had been removed from outside the union.

A spokesperson from the KU Department of Public Safety said there was no additional information to release regarding the case.

what a horrible thing to do!!

Hopefully surveillance cameras were able to catch some of the action for investigators.

This is all Gill's fault. Fire Gill!

This aggression will not stand!

That Jayhawk really tied the room together

. . . you don't have to come and confess, we're looking for you. You are so dumb, you are really dumb. for real.

hide your kids, hide your wife...and hide your husband too, 'cause they're rapin' errbody out there

We got your t-shirt, you done left fingerprints and all...you are so duuumb. you are really dumb. fo' real.

drunk d bags. i hope they crashed into a tree after their failed attempt to vandalize a school they could not get into even if they were the chancellor's kids

The Jayhawk was unbolted from the ground and moved slightly? Prosecutor should seek the death penalty for that.

The Jayhawk was unbolted from the ground and moved slightly? Prosecutor should seek the death penalty for that.

I also heard they double posted.

The work of hooligans!

(too drunk to remember the rest of the plan)