At 7-2, Baylor still not getting any respect

By By Chuck Carlton - The Dallas Morning News 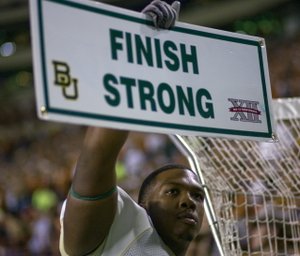 Baylor defensive tackle Courtney Green displays a sign to the crowd during the fourth quarter of the Bears’ 30-22 victory Saturday at Texas.

Baylor’s players are waiting for the rest of the planet to start believing in their turnaround, just like they do.

In the process, the Bears are taking considerable pleasure in proving people wrong. The most recent case was actor Will Ferrell’s typically comic guest appearance Saturday on ESPN’s GameDay. “It’s scientific law that Baylor cannot beat Texas at Texas,” Ferrell said in making his picks.

Baylor took notice and channeled the motivation to a 30-22 win over Texas, its first victory over the Longhorns since the John Mackovic days.

Now, today’s game at Oklahoma State has real meaning. Back in August, nobody outside of Waco and Stillwater was circling the date. Oklahoma State, ranked 19th in the AP poll released Sunday, was picked to finish fifth among six teams in the South Division.

While Oklahoma State had a pretty small preseason bandwagon, at least the Cowboys were coming off an appearance in the AT&T Cotton Bowl. The last time Baylor had been to a bowl was 1994 and it had won just one Big 12 game in 2009.

Which brings us back to Ferrell’s theory, as interpreted by Baylor quarterback Robert Griffin.

“Baylor never beats this team, Baylor never beats that team, like Will Ferrell said,” Griffin said. “That Bear is gone. If we beat Texas, we can beat Oklahoma State and that’s all that matters right now because that’s the next team we have on our slate.”

As recently as a month ago, that would have been viewed as bravado or simply crazy talk. After Saturday’s win at Texas, nobody disagreed with Griffin’s premise.

Baylor was the confident team rallying in the second half. The Longhorns, one year removed from the national title game, now stand at 4-4 with three home losses and facing hard questions.

The Cowboys managed a 24-14 win at Kansas State even without standout receiver Justin Blackmon (62 receptions, 1,112 yards and 14 touchdowns), out while serving a one-game suspension. Oklahoma State ranks second nationally in total offense and third in scoring offense.

Thanks to Blackmon and tailback Kendall Hunter, Oklahoma State is the only team in the Bowl Subdivision with a 1,000-yard receiver and a 1,000-yard rusher.

Oklahoma State has beaten Baylor in 13 of the last 14 meetings. Then again, most of the Big 12 South could make the same claim before this season.

Baylor coach Art Briles said he’s seen his team progress with each game. The players that the Bears need to play well are playing well, he said.

“I think that just bleeds into confidence,” Briles said. “Production equals confidence and we have been pretty productive the last few weeks.”