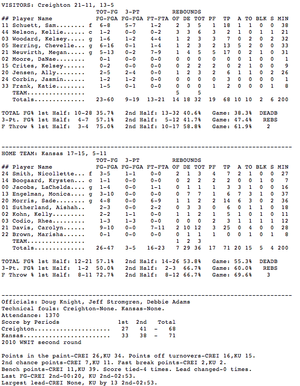 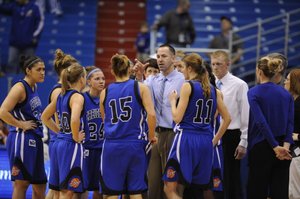 Great win today.....but we really need to bring in the fans.....there are no excuses for not coming now since the men are done!!! The next home game needs to have lots of fans to keep it coming back!!!!!

Great win girls! I appreciated everyone's effort during the win. No one lost her composure during Creighton's late run. Wish there was a way to get to the game on Thursday, but I think my boss would frown. Good luck and play hard. RCJHGKU!

Pretty sad when the Creighton fans make more noise than the Jayhawk fans. They even brought their Pep Band and Cheer Squad. We need much more noise should we get the Elite Eight Game at home. (Yes, I believe they can beat Illinois State on Thursday)

Great Game (and exciting) Girls! Bring home a championship. It's still a Championship regardless if it's an NCAA or a WNIT.

It's sad when our coach is laughing and joking like it's okay we're in the NIT. Fans have lost their patience with this program.....that's why there wasn't anybody there. It's always next year with Bonnie.

jayhawk2062 (anonymous) says… [ [ It's sad when our coach is laughing and joking like it's okay we're in the NIT. Fans have lost their patience with this program.....that's why there wasn't anybody there. It's always next year with Bonnie. ] ]

Maybe 2062 needs to ask Angel and Danielle for an explanation of ACL surgery. It might clue him in a little to find the disappointments this year are not his alone to bear -- but probably not, he'll just keep pissing his pants on these boards because someone took away his vicarious bragging rights.

I've now seen Creighton play KU four times in the last two years. They are a scrappy team who always play hard and are fun to watch. Though I'm glad that Megan Neuvirth is a senior so that we don't have to face her again - she's a quality player.

Why is this story the lead on Tuesday? The game was played on Sunday.