An exterior shot of the proposed 3,000-seat addition to Memorial Stadium that will include the Gridiron Club. 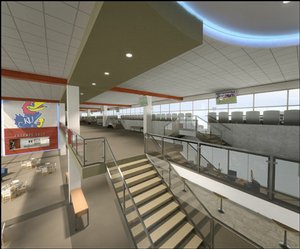 The club will hold 3,000 seats, cost $34 million to build and finance a $40 million commitment from Kansas Athletics to KU's academic programs.

Kansas Athletics Inc. knows how big the new Gridiron Club will be, how much it will cost and even who will be building it on the east side of Memorial Stadium.

Now it just needs the money.

The effort to add and operate a 3,000-seat club atop the east side of Memorial Stadium so far has attracted nearly $4.5 million in contributions and commitments, said Jim Marchiony, an associate athletics director.

The entire project is expected to cost $34 million, and athletics officials have said they would not start construction until they had secured enough money to build the place — a project still formally scheduled to open in 2010.

That window appears to be closing.

“It’s a 10-month construction project,” Marchiony said. “Even if we started February 1st, you can do the math.”

“We will build it the way we have planned to build it,” he said.

KU unveiled the Gridiron Club concept at the beginning of the 2009 football season, which started with promise before ending on a seven-game losing streak and the departure of Coach Mark Mangino with a $3 million settlement.

“We are aggressively and confidently moving forward,” he said.

The Gridiron Club is to be financed solely by memberships. Benefits for each include a game ticket, food and drink, and a seat in and access to the club.

Memberships could generate as much as $200 million, of which $40 million would go to Kansas University academics and $25 million would finance construction of an “Olympic Village” complex for athletics.

Sorry, I just don't see it happening in its current setup.

this project is half the reason mangino was fired, in my opinion. its lews baby.

KU Athletics needs to learn when they've been defeated. Give it up already...

Here is a better idea. How about you spend the money creating some type of amplification system in an effort to disrupt the opposing teams. Lord knows that 85% of the fan base sits on their ass the whole game. I despise them but go up to Lincoln and watch a game, it is loud as hell. Maybe money can be spent on bringing in passionate fans who will stand and cheer. Sorry for ranting.

shut it, doubters. this is a great idea/program. will be among the nation's ELITE when this thing is ready. go for it, hawks.

so they have 4 million out of the required 34 million? and they still plan to open it next year? get real ku athletics

Bulldoze that entire stadium; it is dreadful ... use that $34 million (and then some) to build a proper stadium (horseshoe of course) with the south end open to the hill. It is old, ugly and bad ... just plain bad. Save a piece to incorporate into the wall of the “New Memorial Stadium” … now that is a plan.

They have raised less than 2% of the amount they could bring in. Lew must still be cursing MM and don't forget the millions he gave in what ultimately became severance pay.

If they don't get the money secured for the 2011 season, I'd change their approach up. There's still a lot of revenue that you could get from the GC. It's kind of one of those things, do you wait until the day there's enough of a premium demand to get the $200 million at once? Or do you go ahead and price it more where the market demand is and maybe take a $7.5 million annual revenue stream?

After the Gale Sayers halftime speech I can see why KUAC is a little short on funds. I still have nightmares about that speech. Didn't Lew bring him back just for this project?

I don't disagree with you as long as they build it in its current location and it is a traditional looking college stadium, not like the disaster in Manhattan. Our stadium is behind the curve compared to the rest of the conference and even though I like the current renovation plans, I’m not certain it will bring it up to par. I’m guessing the price tag of a new stadium is probably an issue. A good pro style football stadium runs about $500 million. No idea what a college stadium would cost.

Just give it up everybody, it's hopeless. There is no light in this dark tunnel....and there never will be. Because Lew is leading us into deeper and darker places. Fire Lew Perkins. How about that for a shirt Joe College.

Well, what do they do when they get rid of the track? They can't add more seats down there. The slope of the seats in the stadium prevents that. The higher you go the steeper it gets, it flattens out at the bottom. The only way they could add more seats would be to literally lower the field. Only problem with that is because the rows at the bottom flatten out so much, if they lowering the field would make some of the seats lose view of part of the field. This is the big problem is that there aren't many ways to redo/revise/update this stadium. Personally I still like it, but they are my team and it will always be my favorite stadium.

Personally, I highly advise lowering the field and adding more seats and getting rid of the freebee view from the hill by finishing the bowl on the south end. I purchased tickets in the '08 season to watch us get massacred by TTech and I was front row at the 50 yard line. Granted, I overpayed for the tickets because I got them off from stubhub.com but the view was just horrible. I could barely see over the sideline. All I saw was Mangino pacing back and forth and the rear-ends of our football team. It was my first KU football experience and I couldn't see a damn thing going on. Luckily there wasn't too much I missed...we got killed that game.