The Kansas University women's basketball team failed to capitalize on a chance to improve its NCAA Tournament resume, losing Thursday night to Iowa State at home. 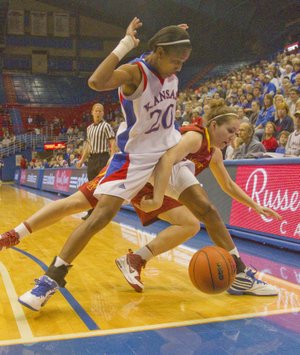 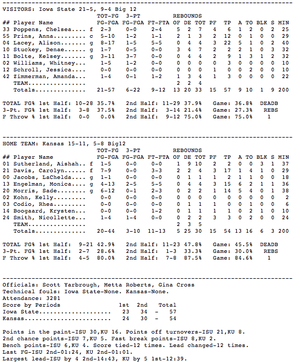 Carolyn Davis summed it up in 14 words.

“They played like a ranked team that didn’t want to lose,” Davis said, “and we didn’t.”

For the Jayhawks, it was their third loss to a ranked team by three points or less at home.

Davis, a freshman forward who led the Jayhawks with 17 points, was involved in the critical play.

Kansas lagged 55-54, but had the ball with the potential for a winning basket with less than 30 seconds remaining. Then, with under 10 seconds to go, Davis posted up, but Nicolette Smith didn’t get her the ball in time, and ISU’s Chelsea Poppens stole it.

“That was a great play by Poppens,” ISU senior point guard Alison Lacey said, “maybe the play of the game.”

Poppens quickly flipped the stolen ball to Lacey who was fouled with :06.5 on the clock. Lacey nailed both charities, her 21st and 22nd points, for a 57-54 lead.

“We didn’t get good spacing,” a somber KU coach Bonnie Henrickson said afterward, “and then we threw a really bad ball inside.”

Kansas seemed in control with 3:16 remaining after Monica Engelman’s conventional three-point play resulted in a 52-48 lead.

But Iowa State, helped by two KU turnovers and an Engelman miss, went on a 7-0 run before Davis snapped the drought with an inside basket at 1:01.

A Lacey miss underneath at :26 kept KU’s hopes alive, but Smith’s errant pass popped the balloon.

“When I flashed over,” Davis recalled about that fateful play, “I thought I’d be open.”

She was momentarily, but the pass was too late.

Kansas did have one last chance to forge a tie. Engelman raced downcourt and launched a jumper from just beyond the men’s three-point line that bounced away just before the buzzer.

“I was a little anxious,” said Engelman, a freshman guard who finished with 15 points, “and I tilted to the left a little to get away from the defender.”

On a positive note, Thursday’s defeat was not a bad loss in NCAA Tournament selection terms. In fact, the Jayhawks don’t have any really bad losses … just a bunch of close defeats to good teams.

“We’re so close,” Henrickson said, “but it seems like we’re not so close.”

With three more ranked teams on the schedule before the start of the Big 12 Tournament in Kansas City, Mo., the Jayhawks can’t afford many more losses, good or bad. They need at least one win, and probably two, in order to secure an NCAA tourney ticket.

“It’s getting real old,” senior Sade Morris said of the Jayhawks’ squeaker defeats at home. “We’ve got to find ways to finish.”

And they need more punch.

Next for the Jayhawks is a Sunday trip to No. 17 Baylor, followed by a visit to No. 3 Nebraska on Wednesday before the home finale on March 6 against No. 12 Texas A&M.

LETS HOPE NOT! Blame it all you want on the ACL tear etc but the honest to god truth is this. We are actually playing better without McCray. BONNIE PACK YOUR BAGS! She sucked when we hired her she sucks now!

Keith I hope not because we can't afford for this type of precendent to be set for football.

I don't like to agree with you naysayers but the reason we lost that game last night was pure and simple. We got outhustled for rebounds and loose balls. It's the coaches job to get the players to hustle by setting their butts on the bench if they don't. She either needs to do that or be gone.

The error that cost us the game was made by a junior, whose playing time has markedly decreased with the arrival of our stellar freshman players. Freshman make errors b/c they are freshman. I don't see anyone calling for HCBS resignation b/c his freshman make errors that reflect their inexperience. I feel Bonnie deserves another year to make her case. She's finally got the nucleus of a team to work with. If she can't do it next year, then I think the evidence is there.

BONNIE HAS HAD ENOUGH TIME! Phog Bill Self would also make his Frosh better-Bonnie would blame her players(remember the time out?). TIME TO GO AND GET A REAL COACH FOR THESE TALENTED LADIES!

Firing coaches seems like a new fad! I doubt Lew could fire Bonnie though.

Since onlyoneUinKansas says we have talented ladies, let the coach who recruited them coach them next year and you will see the results - 20 plus wins and NCAA tournament bid !!

Also, good recruiting takes a " real coach " and that is what we have !! The recruits have gotten better and better each year with Bonnie.

Have you seen Carolyn and Monica play? You know they're freshmen, right?

I have season tickets and have gone to most of our home games the past four or five years. Also I have gone to 4-6 home games for each of the past 25 years or so. I love college basketball (both women's & men's), though I have NOT coach on the college level, I have coached both men & women's basketball at the high school level (and younger). I do NOT pretend to be a great or know it all coach. That said - I am very frustrated watching our women's team, it is not JUST based on this seasons or just wins & losses. I had such high hopes and expectations with the hiring of head coach BH. Here is what concerns me: 1) Unacceptably high number of turn-overs (especially unforced turn-overs) 2) Too many players that seem intimidated with physical play (not dirty or overly physical - just any physical play). Not consistant blocking out (esp. on defensive rebounds and free throws). 3) Too many players that are NOT an offensive threat (simply run the play whether it's there or not or being over played by the defender in the passing lane). 4) Terrible lack of concentration - for example, missing wide open lay-ups, weak side defensive help, not hitting the open player under the basket, etc. etc. Many times these occur in the ending minutes of the games. 5) Many times we DO NOT have all five players "getting after it in a hard-nosed way" for short no fire or all out effort. 6) Too often just a lack of fundamentals and/or 40 minutes of real strong effort WITH focus. Too, too often we DO NOT play smart basketball (that includes upper classmen)

The above is mainly the responsibility of the players (yes, the coaching staff has to demand it, but players must buy in and produce at some point). There are a few things that the coach and staff have been done that are disappointing: 1) During many of the games the past few seasons there have been little or NO adjustments defensively or offensively, especially when the opposition was beginning to take control of the game. 2) Many times opportunities seem to just slip by our coaches. For example, this year we had a game where we had a 3 point lead with only 9 seconds on the left on the clock in regulation play. There was a time-out and the other team had to go the full length of the court. With the ball in play the guard dribbled the length of the floor, a screen was set, she dribbled around the screen (not facing the basket), until she shot the ball with 2 seconds and made the 3 point shot to tie (our defender stayed with her all the way even through the screen). SHE HAD EVERY OPPORTUNITY TO FOUL AND SEND THE SHOOTER TO THE LINE FOR JUST TWO SHOTS). 3) I do not understand what our player rotation is based on???? 4) There seems to be little to NO fire in our head coach or assistants!!! (not just this season). 5) Our recruiting, for a coach in her 7 th year, does not seem outstanding and in fact is VERY puzzelling (I'm being very kind here).

Prariehawk how dare you speak the truth on this board;)

Great post btw. You pointed out a HUGE problem-NO ADJUSTMENTS! Also there is no fire when the game is on the line Bonnie isn't telling her team things like "d boards win the game, guard player x" etc. Seems a few love Bonnie and how little she has done that they want to defend her.

I can't comment on this game... I wasn't there to see it due to other reasons... I couldn't even see it on TV or listen to it on the radio. But, the girls are right... losing like this is getting pretty old fast. I'm getting real frustrated as a fan to see this.

Come on Girls! You're on national TV on Sunday... take down Baylor... besides... they'll be wanting revenge for last year's smackdown...

I can't comment on this game... I wasn't there to see it due to other reasons... I couldn't even see it on TV or listen to it on the radio. But, the girls are right... losing like this is getting pretty old fast. I'm getting real frustrated as a fan to see this.

Come on Girls! You're on national TV on Sunday... take down Baylor... besides... they'll be wanting revenge for last year's smackdown...