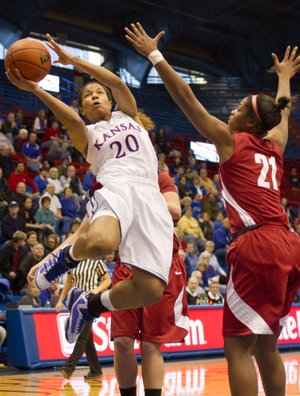 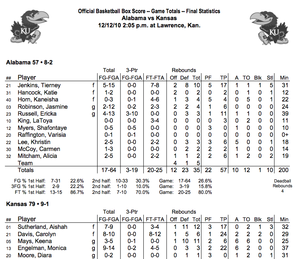 Late last week, Kansas University women’s basketball coach Bonnie Henrickson said her team’s response to its first loss of the year — Thursday at Michigan — would be far more important than the loss itself.

Sunday, back home in the comfortable environment of Allen Fieldhouse, the Jayhawks responded with a strong effort against stiff competition and ran away from Alabama, 79-57.

“This was very big,” KU junior Aishah Sutherland said. “This just showed that we’re still in there. That was just a struggle that we went through, but now we’re back on track.”

Sutherland played a big role in getting the Jayhawks (9-1) going in the right direction again as she recorded her fifth double-double of the season, with 17 points and 12 rebounds. She also added a block and three steals in 32 minutes.

Sophomore Carolyn Davis (24 points on 8-of-10 shooting) teamed with Sutherland to outscore the Crimson Tide in the paint, 48-14. Most of those points came off of layups as the Alabama pressure — which had forced opponents into an average of 27 turnovers per game this season — had little impact on the young Kansas guards, who handled it like veterans for most of the afternoon.

“We did a lot of gambling, and they made us pay for gambling,” Alabama coach Wendell Hudson said. “Kansas did a very good job handling our press.”

The credit for that goes to several players, as well as a coaching staff that had them well prepared. Said freshman point guard Keena Mays of seeing ’Bama’s pressure live: “I don’t think it was as bad as it looked on film. We were ready for it, and we knew what to expect when we got in the game.”

Mays, KU’s primary ball-handler, picked up two fouls early in the first half and was forced to sit for a good chunk of the first 20 minutes. With Mays out of the lineup and former starter Angel Goodrich still out because of an injury, Henrickson turned to sophomore Monica Engelman, who got help from CeCe Harper and Diara Moore.

“We were scrambling with Monica at the point and were just trying to get into the locker room alive,” said Henrickson, whose team owned a 34-29 advantage at the half. “I’ll be honest with you, I didn’t care if we scored or if we kept them from scoring. Credit to (our) guys to just hang on and not panic and have some poise and get us into the locker room, where we could regroup.”

Asked if she was comfortable handling the ball against such heavy pressure, Engelman (22 points, six assists) was honest.

“That was a last resort. That wouldn’t be the first option that we would go to, for me to be the point guard,” she said. “But we had to play with the cards we were dealt, and I just handled it the best I could.”

Ball-handling wasn’t much of a problem in the second half. KU opened with a 13-1 run and kept the Crimson Tide at bay the rest of the way.

“We came into the locker room, and, as a team, we got together and said we don’t need to get comfortable, we need to go back out there with energy and take over,” Sutherland said.

That’s exactly what KU did, outscoring ’Bama, 45-28, in the second half to pick up the victory. KU shot 59 percent from the floor and limited Alabama (8-2) to 27 percent.

“This was really big,” Engelman said. “It’s preparation for Big 12. You might lose one, but you have to be able to bounce back, and I think it was good for us to show we can do that.”

nice bounce back game from the Michigan loss. let's just get both our men and women thru finals this week....and look to prepare for the conference.

Nice front page pic of Marcus dunking the ball, but last time I checked, he plays for the men's team.

Great win, Jayhawks. Alabama is a good, aggressive team and it was great to see us handle their press so well.

This team has potential. Way to bounce back ladies.

I had a feeling the women would have a problem with Michigan. Although they have 4 losses, 3 of those came against top 20 teams. This is a very good KU womens team, the best in many years. With 6 teams in the Big 12 ranked in the top 25, I hope the lack of early season competition doesn't come back to haunt them. That said, there is nothing like success (they should be 13-1 going in the Big 12) to build confidence.

Awesome. I really had that chalked up as a loss. Alabama is pretty good.

Great Job by the entire team, but we seem to always overlook the players that are playing defense all game long, what about them? Don't lose them in the shuffle, as they are an integral part of the wins, not just about how many points a player scores...The entire team needs to play more defense.

The KU women look like they are poised to make a tournament push. If they can finish in the top half of the Big XII, I say they are in the dance for sure. They need to finish .500 or above in conference. Let's go ladies!

Great win ladies. What a pleasure it is to see how well the young kids are adjusting to college level basketball. This team is not the same team as in previous seasons - and it appears that the new crop of talent has alot to do with it and I think its G-R-E-AT!! I am excited to see what the young kids will look like after they have gotten a year of college ball under their belts. The team as a whole still has some things they need to work on though if they want to be successful in Big 12 play - on the offensive and defensive end. KU's offense is way too predictable which makes it easy for an opponent to defend them. Defensively, EVERYBODY ON THE FLOOR needs to committ to playing defense both individual and team. And does anybody know what's the deal with Jackson and Jelniker? They have been getting limited minutes on the floor if at all and Jackson is a local kid.

Honestly like 90% of what I've seen thus far... I do, however, find it confusing to start Jelniker even after she has been mostly unproductive. I hope she can shake the slump off before conf play. Waiting for some play action from Harper and Goodrich as the 1 & 2, Engelman, sutherland and Davis...that's a line up of just Wow!!!! Glad they shook off that Michigan loss...imo we should continue to push for the transition points and take a few steps away from feeding inside...it has been predictable. There is a ton of talent on this team...very excited for them! Let's work on the defense and get some more fight/weight on the "bigs" and we stand a great chance to make the dance. Hats off to Harper for her consistent D...hope to see you in the starting line up soon. Rock Chalk Bonnie & Co.!!!!!!!! Keep up the fight and Good Luck with Finals! See you Ladies on Sunday!!! Go KU!!

Every player on the team (from #1 - #11) could be a force from the inside/outside, if allowed to play their game. When Big XII play rolls around, they will need all 11 players to contribute. Getting the kids confidence up during pre-season play should be a priority and will prove vital to the team's success in the next coming games.