Kansas University wide receiver Dezmon Briscoe had a career day on Saturday against Oklahoma. He caught 12 passes for 269 yards and two touchdowns. 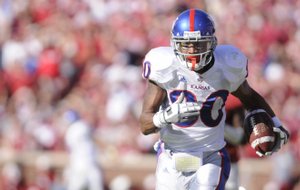 Kansas University wide receiver Dezmon Briscoe had a career day on Saturday against Oklahoma. He caught 12 passes for 269 yards and two touchdowns.

While Kansas receiver Dezmon Briscoe has flown largely under the national radar this season, his statistics have been comparable to those of all-American Texas Tech receiver Michael Crabtree.

In the days leading up to the Kansas University football team's 11 a.m. matchup with eighth-ranked Texas Tech on Saturday, much of the pre-game focus will center on the Jayhawks ability to slow down Red Raiders receiver Michael Crabtree, last year's Biletnikoff Award winner and consensus all-American.

What won't be discussed nearly as much - but could play just as big a role in the game's outcome - is how the Tech defense hopes to limit Kansas receiver Dezmon Briscoe.

While Crabtree is no doubt one of college football's most recognizable stars, Briscoe, a sophomore who earned freshman all-American honorable mention honors last season, has quietly established himself as a comparable threat. Through seven games this season, Briscoe's stats have been nearly identical to Crabtree's. Both are ranked in the top 12 nationally in receiving yards per game (Crabtree is ninth in the nation with 103.4; Briscoe is 12th with 100.7) and total receiving yards (Crabtree is ninth with 724, Briscoe is 11th with 705). And while the Tech sophomore has the edge in receiving touchdowns - 12 to eight - Briscoe has been forced to share catches with one of the nation's most reliable receivers in junior Kerry Meier.

"He has played extremely well," said Kansas coach Mark Mangino on Tuesday, "and he has shown that he's capable of being one of the top receivers in this league."

Despite his steep production, however, Briscoe insists he doesn't feel left out when talk of the conference's most dangerous receivers centers primarily around Crabtree and Oklahoma State's Dez Bryant.

"No, he deserves it," Briscoe said of Crabtree. "Obviously, for the simple fact that he was a Biletnikoff finalist last year, and the yardage and touchdowns he put up last year, he already proved himself. I'm still trying to get to his level, so I can't really put myself on his caliber right now."

Against an Oklahoma defense ranked first in the Big 12, Briscoe caught 12 passes for 269 yards, both career-highs, and two touchdowns. The 269 yards marked the highest single-game total in the Big 12 this season, and the most in Kansas' 109-year history.

If there's a knock on the 6-foot-3, 200-pound receiver, it's that he has struggled with consistency this season. Before last week's breakout game, he had failed to surpass 50 yards in receiving in each of the previous two weeks, including a two-catch, 22-yard game against Iowa State. His receiving yardage per game this season is a bit roller-coaster in nature - in order, he has finished with 55, 146, 36, 124, 22, 48 and 269 yards - although he has scored in five different games.

The hope among coaches is that last week's career performance will give him the confidence necessary to perform consistently throughout the rest of the season schedule, which still features games against Missouri and top-ranked Texas.

Briscoe said after Saturday's game that while much of the credit for his success belonged to quarterback Todd Reesing, he felt the man coverage Oklahoma used against him for much of the game allowed him to make the plays he did.

And entering Saturday's game, Briscoe would like the coaching staff at Texas Tech to know that a similar strategy Saturday would work just fine with him.

"I don't know what their defensive plan is," he said, smiling, "but I hope it stays the same."

The best part about Briscoe is that Todd can throw it up and let him make a play. I understand having a structured offense, but against teams like OU most of our recievers are going to be shut down by their superior athletes and having a playmaker like Dez is something we have not had for a few years. Was Jonathan Wilson's game against South Florida a flash-in-the-pan? He needs to step it up!

Dez is probably our best weapon. I don't want us to force him the ball, but it is in our best interests that he get the ball six or seven times a game. He is our biggest playmaker.

Our offense will continue to be powerful next year. Our defense does need to step it up. Briscoe, Meier, and Reesing can't do it alone

First thing I thought of when I saw Dez last year was "prototype." We had some good guys leading up to landing Dez but he is the prototypical WR. Now if we can just get Meier healthy and get a TE developed this year. Would love to see solid progress and development through the end of this year, hammer a good team in a good bowl game, then light it up again next year. Reload, press play.

Dez Bryant had over 200 receiving yards in that game.

Crabtree will light us up this weekend. He'll go for over 150.

First, I agree that we have had some decent guys playing receiver, but none of them compare to Dez. What I have to point out is the fact that last year, we were supposed to get smoked by Adarius Bowman sp?, and we played physical defense and shut him down (granted Aqib did lay a pretty good hit on him and knocked him out of the game).If we can play solid defense, control Crabtree and let him get his, while shutting down the other receivers, we can rely on our offense and the crowd to get behind us and get the big victory.Rock Chalk

"Oklahoma State had Bowman and Bryant last year, and Bryant went for 8-155-1 in Stillwater (KU won, 43-28). The one you guys are probably thinking about was in 2006 when Bowman went for 13-300-4 in Lawrence (OSU won, 42-32)."Nobody is confused on what happened in what year.Rockchalk_dpu is referring to the fact that Bowman had lit us up in 2006, and was supposed to do it again last year. Instead we shut him down that game.hometownhawk was countering with the fact that shutting down Bowman didn't help that much because Dez Bryant went for 200 yards. However, his stats were incorrect in that Bryant only went for 155.As for me, I agree with dpu's philosophy. If you concentrate too hard on shutting down one star player, then the rest of the receivers will tear you up. Just play solid defense, Crabtree will get his yards no matter who is defending him, and hopefully you'll do enough to slow down the rest of the receivers that his big day doesn't mean anything.Case in point, that's exactly what Oklahoma did with Dezmon Briscoe last week. They knew he was good enough to beat single coverage a few times in the game, but even his 269 yards are not enough if you can shut down everybody else.

I agree with the thinking that says you try to shut down everyone else and give Crabtree his yards. He is too good to stop, so our D needs to focus on giving Harrell no other options. Some QB pressure would be nice as well, but I don't see that happening.

What i would like to know, is when is Todd (Sparky) start passing like he use to? He use to be able to hit a dime at 50 yards. Ever since that reporter ask him, "how do you do that". He never been that smooth scents...