The Aggies are 21-4 all-time against Kansas and are currently on a three-game winning streak against the Jayhawks. But this evening, the Kansas volleyball team was happy to welcome A&M to Lawrence - that's because the Aggies are 1-7 away from College Station this season. 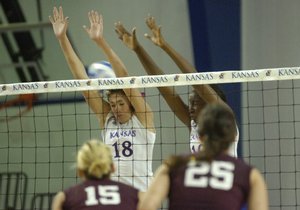 Kansas University's volleyball team could save itself a whole lot of heartache by winning the first set against opponents.

It marked the sixth time this season that the Jayhawks fell behind, 2-0. Kansas has won only two of those matches.

KU coach Ray Bechard wished he had an answer for those dubious statistics.

"Maybe we'll have an online vote and see what everybody thinks, because obviously that's not our plan," Bechard said. "A&M had a different lineup, but it didn't matter. We just did not respond like we needed to."

Compounding the Jayhawks' anguish was the opportunity that trickled away to rise in the Big 12 standings.

"We talked about that in detail that never did we have a chance to move quite as much as we would tonight," Bechard said, "but it didn't happen."

KU established early leads in each of the first two sets Wednesday. Nicole Tate's kill and Natalie Uhart's ace contributed to a 9-5 start in the opener. A Uhart kill then tied the score at 11 before the Aggies pulled away in set one.

Outside hitter Karina Garlington tallied back-to-back kills to begin set two for a quick 2-0 edge, but yet again, the lead was short-lived. When A&M outside hitter Jenny Banse's tip fell in the middle of the court, Kansas headed to the locker room trailing by two at the intermission.

"We just have been struggling to come out strong," Garlington said. "We seem to work ourselves into a rhythm, but we have to figure out ways to be in that rhythm from point one."

Garlington and fellow sophomore Jenna Kaiser helped break the Jayhawks from their funk, mounting a flurry of successful offensive attacks in sets three and four. Garlington ended the third set with a kill off the back line, while Kaiser terminated set four with a kill of her own.

Kansas committed more errors in a shortened fifth-set (six) than it did in the entire fourth set (four). As a result, KU finished the last set with a negative attack percentage and never even grabbed a lead.

Kansas travels next to Missouri for a Border Showdown matchup on Wednesday.

KU Vbers are settling into a typical Big XII sprial of bottom third of standings. The program has shown no traction of improvement wither within NCAA or Big XII.