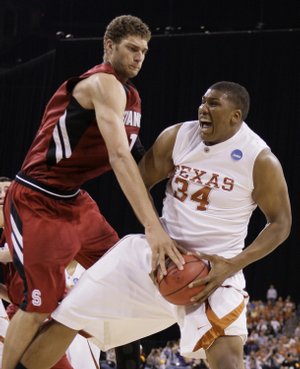 Stanford forward Brook Lopez, left, gets a hand on the ball as Texas center Dexter Pittman maintains control. Pittman helped shut down Lopez and his twin brother, Robin, in the Longhorns' 82-62 victory Friday in Houston.

Houston — All those hours on the exercise bike, all those yummy desserts he skipped - it all finally paid off for Texas center Dexter Pittman.

The guy with the wide body and the baby face used every ounce of his girth to pound and pester Stanford's 7-foot Lopez twins, wearing them down like a boxer throwing body blows. Once they slowed, D.J. Augustin and Texas' usual stars ripped off a 20-3 run, sending the Longhorns past the Cardinal, 82-62, in an NCAA South Regional semifinal Friday night.

"Dex did a great job," said Augustin, who scored eight of his 23 points during the game-breaking run. "He put his body against him, and I don't think Brook could handle that weight."

With Pittman helping answer the question of how the Longhorns would handle the Cardinal's big guys, his little teammates did the rest.

The crowd turned quiet when Stanford (28-8) made it 52-51, but then Brook Lopez went out, Augustin turned a loose ball into a one-man fast break, and the rout was on.

When James threw down a dunk so electrifying that he began celebrating on his way down, the Longhorns faithful knew they'd be coming back to the stadium.

Texas will play Sunday against Memphis.

"We had a feeling we'd have a good load of our fans down here," Abrams said. "They did a good job of getting this place loud and really supporting us. It really helped us out when they started coming back, and they got into it."

Pittman is an unlikely star. A sophomore who arrived in Austin weighing 366 pounds, he's down to 299 but still only a bit player. This time, coach Rick Barnes made him the first guy off the bench and told him to make sure Brook and Robin Lopez felt his presence in the most obvious way.

The brothers didn't like it, especially not Brook - whose frustration was obvious every time he got banged. Which just led to more banging.

Brook went from scoring 24 of Stanford's first 48 points to not making a basket over the final 13:55. Pittman kept him from getting to his favorite spots, and even when the jumbo defender was on the bench, Lopez didn't have enough energy left to beat whoever took his place.

"I felt he was getting frustrated because I heard him talking," said Pittman, who had four points and six rebounds in 10 minutes. "My goal was to make sure I keep my body at him on all times."