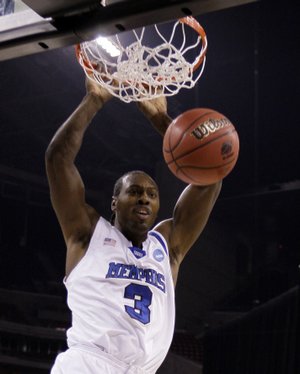 Houston — Memphis made mincemeat out of yet another team that was supposed to end its stay in the NCAA Tournament.

The final score Friday night: Memphis 92, Michigan State 74, but, really, it was worse than that.

Next up in the South Regional, a game Sunday against Texas with a trip to the Final Four on the line, though the message on this overwhelming night was clear: Don't mess with Memphis.

"Everyone picked us to lose. We were the upset special," Memphis coach John Calipari said. "That was us. We were going to get outplayed, outcoached, outskilled, outhustled, out-this, out-that, and we can't shoot free throws."

Didn't quite play out that way.

Freshman Derrick Rose will play at least one more college game after a 27-point, five-assist night that showed he's ready for the NBA. He exited early in the second half with a cut on his forehead that required medical attention, but returned to the floor with 81â2 minutes left.

Meanwhile, Michigan State senior Drew Neitzel's career is over, and this was no way to end it. He was held to six points, his first of two buckets coming on a three-pointer that clanged around the rim and fell, mercifully, with 1:47 left.

The game long had been over by then. The score at halftime was 50-20.

"That first half of basketball was one of the best I've been involved in as a coach," Calipari said.