One step at a time

KU freshman guard Chakeitha Weldon had her freshman season cut short just as she'd turned the corner and had begun to make in impact. Now, as she recovers from ACL surgery on her right knee, she recalls the injury and goes through the road to the start of the 2008-09 season. 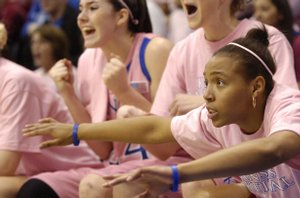 Coach Bonnie Henrickson said she'd had only three athletes suffer from the injury in her 11-year coaching career, though Weldon now has the same distinction as recent Jayhawks Erica Hallman, Leila Menguc and others who have had to overcome the injury. Factor in current players Nicollette Smith and Katie Smith, who dealt with it before arriving at KU, and it preaches to how much more prevalent ACL tears are with female athletes than male athletes.

"It's significant," said Dr. Jeffrey Randall, the head team orthopedic surgeon for the KU athletic department, of the ratio. "It's four, five times more common in female athletes than male athletes for the same sport in the same hours of participation."

Randall, who has been the Jayhawks' lead orthopedic surgeon for 12 years, cited several theories, ranging from anatomy to genetics to hormonal factors.

Randall also said that with the positioning of the legs, female athletes are more prone to non-contact ACL tears, such as the one Weldon suffered.

Weldon entered Bonnie Henrickson's program as a blur on the floor, able to hit top speeds unlike very few. Then, once that speed was somewhat harnessed at midseason, boom.

The 5-foot-8 Atlanta native collapsed in a Feb. 5 practice, halting with a jump-stop to avoid teammate Kelly Kohn on a drive to the hoop.

And the long road back from a torn ACL in her right knee began. Officially it was Feb. 23 - the day after Weldon's surgery.

"I said it right away, probably the fact she was starting to turn the corner and having success would help her emotionally through this procedure," Henrickson said. "She knows she can help us. She knows she can play at this level. I just thought if there was a blessing in disguise in all of this, at least she was playing well when it happened."

Weldon recalls a December meeting which led to her officially finding a groove within the Jayhawks' rotation.

"After I had the meeting with coach Bonnie, I played the way she wanted me to be playing and not my way," she said. "She told me it's her way or no way."

Weldon took it upon herself to delve deeper into the playbook and locate a niche in Henrickson's system. As her turnover numbers began decreasing some in practices, Henrickson felt Weldon had earned herself some more serious minutes.

The high point of Weldon's first season at KU would come shortly thereafter.

"She'd slowed herself down enough where she wasn't making the sheer number of mistakes," Henrickson said leading up to a Jan. 30 game at Oklahoma. "She never got trapped, wouldn't allow herself to get trapped. She was just starting to understand angles, speed in and out of the gap to get away from it. She might have made a mistake, but it wasn't what it used to be."

In the 67-51 loss to the Sooners, Weldon scored 10 points in 19 minutes. She had three assists and two rebounds.

A few days later against Iowa State, she chipped into a 53-50 win with five points and two assists in 14 minutes. She turned the ball over just once, though it would be her last action of the season. Three days later came the injury, ending her season with a 2.6 points per game average in 10 appearances.

"Right after practice (she found out it was an ACL tear)," Weldon said. "I was just thinking 'dang, how long am I going to be missing in action?' All I was thinking was, 'When am I gonna be able to play again?'"

Surgery came 17 days after the actual injury, but rehab began the day after Weldon went under the knife.

Ann Turner, a certified trainer in the athletic department, essentially became Weldon's best friend for the duration of her rehabilitation. Sometimes the term 'best friend' was sincere, sometimes it was more sarcastic.

First came working on the range of motion right after surgery. Weldon then spent time on crutches and in an immobilizer before physical therapy began, building the strength in her knee back up.

In early May, it was a regimen in an empty Allen Fieldhouse with Turner, including drills that included sliding while bouncing tennis balls back and forth, working against resistance provided by large elastic bands.

But the physical recovery from an ACL surgery is only half of the battle.

Weldon, who was away from home for the first time as a KU freshman, had the same mental hurdle to clear that many athletes do. Along with dealing with being without basketball for the first time, school became a struggle as well. Despite being a speedy, fearless guard in her trade of choice, she's also a shy, soft-natured person. Getting over the mental road block was far from easy, but, aided by a strong support system, she ultimately found a way.

"It was stressful," Weldon said. "It was hard sitting on the bench looking at my teammates. I fought through all the pain, and then it was all kind of a mental thing.

"I sat down and I realized God put me in this predicament for a reason. He put me in it to bring me out. ... I'm glad (Turner) didn't give up on me, because I know at the time it was hard to push me through, but she kept me strong mentally."

Henrickson & Co. made sure to keep Weldon very much a part of the team. Whether it was taking on a new role as a cheerleader at the end of the bench, helping hype up her teammates in a pre-game circle in the tunnel outside of the team's locker room or keeping track of hustle plays and turnover stats in practice, she was never far away.

"If she wasn't getting my time and attention in practice, I tried to give her more time outside of it," said Henrickson.

It also helped that two of Weldon's teammates - Nicollette Smith and Katie Smith - had been through the same procedure before.

"(I made sure she knew) You didn't get left behind because this happened to you," said Smith, who tore hers in high school in 2003. "You have to be competitive with yourself (during rehab)."

At the end of May, three months following surgery, Weldon was back to running for the first time since that February practice.

She's on pace to be back at full strength for the start of the 2008-09 season. To get caught up on some of what she missed on the court, she'll be in Lawrence for both sessions of summer school in the coming months.

"I know in her heart she wanted to go home and be home for at least one," Henrickson said. "She bit the bullet. I knew that wasn't really what she wanted to do, but she's willing to make that sacrifice."

Henrickson recruited Weldon as a point guard, but after seeing what she can bring to the table, she now sees her becoming more of a combo guard. That could fit in nicely alongside ballyhooed recruit Angel Goodrich, who should take over point guard duties next season. She has the speed to make an impact on the wing off of the ball, where the old turnover bug will be less likely to affect her. Plus, she can shake things up for opponents by also bringing the ball up the floor.

Weldon said she doesn't expect there to be any kind of a mental hurdle in being comfortable once she's cleared to again play. Just coming to terms with the injury was tough enough.