State of the art: part II

This artist's rendition of the new Kansas University basketball practice facility shows three of the seven planned baskets and the windows looking out on Allen Fieldhouse to the east. The windows will have the ability to be shaded to prevent spying on closed practices. Dunking Darrell Arthur (00) not included. 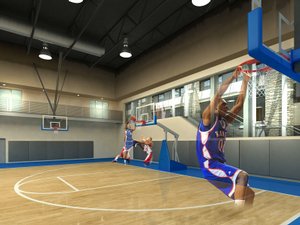 This artist's rendition of the new Kansas University basketball practice facility shows three of the seven planned baskets and the windows looking out on Allen Fieldhouse to the east. The windows will have the ability to be shaded to prevent spying on closed practices. Dunking Darrell Arthur (00) not included. 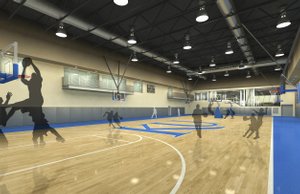 This view of the new practice facility, also facing east, shows, among other things, the balconies overlooking the facility from the offices of coaches Bill Self and Bonnie Henrickson.

If any members of Kansas University's sports teams other than football were feeling left out, they shouldn't feel that way for long.

As the KU football team luxuriates in the Anderson Family Football Complex, its princely new home away from home, the rest of the Jayhawk student-athletes soon will get new digs of their own.

A $38 million project is under way that should bring the rest of the KU athletic facilities up to standards set by the football team's facility.

The project, scheduled to be completed Oct. 15, 2009, is far-reaching. It includes new clubhouses for the men's and women's basketball teams; a donor atrium in the corridor between Allen Fieldhouse and Horejsi Center/Parrott Athletic Center; new locker rooms, especially for sports without their own; renovations to Allen Fieldhouse; and increased student-support areas.

The overreaching goal is to bring all the athletic-department buildings under one roof, metaphorically, at least. One indoor corridor will link all those buildings where now they're connected by a labyrinth of hallways and sidewalks.

"There is no Parrott and Wagnon - there is only the athletic facility," Lester said.

Lest anyone think the updates and upgrades are merely cosmetic, Lester says think again.

"And the facilities were just old. Our coaches want to win. We want them to win. These are the assets they need."

Title IX - the federally mandated equal-opportunity legislation - might have been the impetus, but perhaps the biggest beneficiaries of the undertaking will be the men's and women's basketball teams.

The centerpiece of the project is a new, 11,600-square-foot basketball practice facility.

It will be bounded by Parrott and Wagnon Student Athlete Center on the north, Anschutz Sports Pavilion on the west, Horejsi Center on the south and Allen Fieldhouse on the east.

The facility will feature the same floor and similar lighting as the fieldhouse, a court-and-a-half setup with seven hoops, a banner of accomplishments and the floor from the 2008 Final Four court on the walls, plus a sound system into which users can connect personal MP3 players,

"It's a state-of-the-art facility," Lester said, "and NBA-type facility. The goal is to have as game-like conditions as we can possibly have."

Men's coach Bill Self likes what he has seen.

"I really believe when our facilities are done, we'll have as nice a practice and arena facility as any in the country," he said. "It will be state-of-the-art practice facility, a court and a half, not only will it be beautiful but practical and one our athletes can take full advantage of."

As it stands, both basketball programs vie for practice time in the fieldhouse and in Horejsi Center. Horejsi also is the home of KU's volleyball team.

"You have three teams trying to share two facilities," women's coach Bonnie Henrickson said. "Time really hasn't been that much of an issue, but we'll be able to schedule practice that's more conducive for the student-athlete. It will enhance the quality of life of our student-athletes, so they don't have to go at 6 in the morning.

And, of course, the new digs are another tool in recruiting, where keeping up with the Joneses can be just as important in an athlete's decision as playing time or anything else.

"It just speaks to the commitment of what we're trying to do here," Henrickson said. "It's a great space for players, and it will serve a recruiting element. But this is about the kids. It needs to be about the kids, taking care of the student-athletes you have in your program. We're thrilled. Between the practice facility and the locker-room renovation, we couldn't be more excited about it."

Those ceilings look 30' high, relative to the rim. Seems plenty high to me...

Wasn't there a talk of renovating the Jayhawk towers for the student athletes living arrangments. Anyone know how that process is going?

I wonder what the 2008 Final Four will look like on the wall of the practice facility since they are selling pieces of the floor to the public. Will it only be half the court? Or are they just selling the out of bounds areas of the floor, keeping the actuall playing surface for this new building? Any info on this would be nice to know...

jayhawkinatl - BOOM! There they go! I lived in the towers back in '91-'92, 17 years ago, and they were pretty beat back then. Agreed, start fresh.

I don't miss men's tennis or swimming ... anyone else, anybody?And I've never attended a women's tennis or swimming event, because I don't have any problems falling asleep!That said, I would like to see men's soccer elevated to scholarship level, and heck ... I'd even go watch wrestling! Okie State, Iowa State, Mizzou and Nebraska have those squads. (we know ALL about Hustler wrestling, er - I mean Husker)I've been to softball games, women's soccer games, baseball, volleyball, etc. But I'm sorry ... tennis, golf and swimming just don't do it for me, and not many others, I'd suspect.***Now finally, I was really glad to see this article mention the relationship between Coaches Self and Henrickson. I really like Coach Bonnie, and I certainly hope she can get things turned around this season ...

jayhawkmiler: You seem to have a pretty biased view of Title IX. There are obviously plenty of arguments for both sides, but to say "Title IX is a failed system" is a broad, sweeping generalization. It's a complicated issue, and it has different effects on different schools. The basic idea is that the underrepresented sex deserves equal opportunity. And it didn't start with sports in mind. Sports have more recently become the emphasis of the arguments but if you read Title IX in it's original form, I think you would have to at least agree with the spirit of the idea.I know a couple of girls who had the talent and certainly the academic prowess to receive full ride educations with schools that wouldn't have provided basketball and soccer without Title IX. Believe me, these girls are now making a difference in the world and I prefer giving them the ride than some 2nd or 3rd string football player with no ambitions outside of football.I don't like the idea of taking away anybody's sports program, but no university has unlimited sports, or math, or science funding. You have to draw a line somewhere, and after that, you have to be fair to everybody.

A donar "atrium" in the corridor between AFH and Horejsi?AKA free booze bar for pre-gaming.....and by free booze meaning free after you donate 3 months salary.

Title IX !?!?!?You know, if you take away football, which is, technically, open to male and female athletes both (remember, Colorado had a female kicker a few years ago), there are actually more women's sports at KU than men's.Anyone else remember when, in the late 90s, KU couldn't "afford" to keep men's tennis or swimming & diving around? Now, with all of these tens of millions of dollars in improvements, KU can't afford to bring them back?! It's disgraceful.What's more, this money factory actually went to the KU Student Senate a few years ago, and asked for a student fee increase to build a rowing facility on the riverfront.Shame on you, KU Athletic Department, for forgetting about those men's programs. Shame on you for begging for money from student fees. And shame on you for building all of these new improvements without so much as a fleeting thought given to either.

Title IX is a joke. I'm OK with adding women's atletic teams as long as it is not at the expense of the men's teams. I used to be on the Men's Swimming & Diving team right before it was cancelled and the sports at KU are not all about revenue. What ever happened to pride and aspirations for young athletes in the sport? I grew up in Kansas and swam since age 7 and always wanted to swim for KU. Now, young swimmers must go out of the state if they want to compete for a Div. I school. Look at the Olympics and how much pride Michael Phelps and the other swimmers are bringing to our country. Take away swimming at this point and what are we left with to bring the medals home? Men's gymnastics, nice? Yeah the basketball team should win, but that is 1 medal. Take away swimming and we would be getting destroyed by China. With all this money and facility renovations, there is no reason we should not have a state of the art swimming facility. All KU is doing by not having this is keeping the university a few steps below the truly prestigious state and private universities. Take a look at the universites that still have Men's swimming. Michigan, Texas, Stanford, Florida, Auburn, Georgia, Minnesota, Arizona, etc. Sounds like a lot of Universities I would group KU in, except for the fact that we don't even have an Olympic sized pool on campus. The Women's Swimming & Diving team must use Free State High School's pool in order to swim in an Olympic sized pool. A high school in Lawrence has a new, indoor Olympic sized pool, but the largest University in the state does not! Embarassing. Good thing we have an awesome basketball and football team, or others might notice this. Even Missouri has a new indoor Olympic sized pool!! Disgusting.

Dangit pike, you beat me to it re: snide comment about the "donor atruim!"I was going to say: Donor atrium: Open bar for bluebloods to get hammered before the rattle their jewelry during gametime!

i believe the renovation has already begun on one of the towers. i think the plan is to do one at a time, kinda like the Res Halls. Not sure what the time frame is, but i know if you search the archives of LJW you can find a story or 2...

To answer d_prowess about the Final Four court, I believe I read where they are going to display the center court logo only in the new practice facilities. Kind of like they have the original AFH center court displayed in the museum.

Jhawkclassof02, that's exactly what I was thinking. Isn't it better to practice in the open arena atmosphere to get a good feel for what the game will be like? I would hope they still do most of their shooting and scrimages in AFH.

jhawk23, I certainly understand why KU got rid of men's swimming and teenis back in the day. That was back in the pre-Lew days when KU had one of the smallest budets in the Big XII; our budget has more than doubled since then. That was back when we were unwilling to institute a donor seating plan for basketball.I wish KU had those two programs, but I just don't see KU bringing them back. They're non-revenue sports and would need major facility upgrades. Plus, it would probably cause us Title IX issues. I don't mind Title IX; I just think football should be excluded from the formula because it skews everything against men in every other sport besides basketball.