San Diego — While Kansas University basketball fans kept busy last fall extolling the offensive prowess of coach Bill Self's fab four recruiting class, the Jayhawk boss spent even more time telling anyone who would listen that defense would dictate when that quartet would play and for how long.

It's a philosophy that has the lone member of this year's class believing his legacy in Lawrence will get off to an early start.

"I'm not one of those guys that shies away from defense," point guard Sherron Collins said Tuesday, a little more than 24 hours before taking the floor for tonight's McDonald's High School All-American Game at Cox Arena.

"If you earn your minutes by playing defense, I'll be in there a lot."

Such bravado is proving to be a calling card for Collins, who, at just 5-foot-11, doesn't possess the imposing physical prowess of many of the additional 23 players who will be suiting up for tonight's all-star contest.

What the product of Chicago's Crane Technical Prep High does have is belief in his game and a willingness to talk about it. 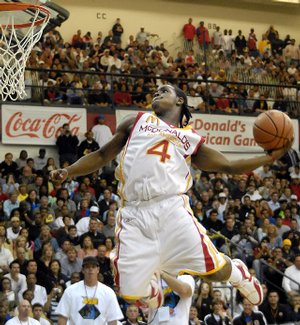 Kansas University signee Sherron Collins heads to the hole on a dunk attempt during Monday's dunk contest leading up to today's McDonald's All-American Game. Collins failed to advance past the first round of the event, but he's bound to play plenty in tonight's showcase - and he's confident he'll play a bunch as a freshman at KU next season.

Ask him to list his strengths as a player, and the list isn't short, as he likens himself to former Georgia Tech guard Will Bynum. In addition to his defense, Collins offers up his speed, the durability of his solid 195-pound frame, his ability to see the floor, "and I can finish over bigger players under the rack."

Even an honest assessment of his biggest weakness is tinged with confidence.

"Right now, I'd say my jump shot. It's kind of good : it's good right now," Collins said. "But I just think I need more work with it."

His overall game already has made an impact on two additional McDonald's performers with whom he'll be butting heads for at least one Big 12 Conference season.

Texas recruit D.J. Augustin and Baylor recruit Demond Carter each have faced off with Collins the last three days during the West team's workouts at the Aztec Recreation Center. And each doesn't mind backing up Collins' self-assessment of his game.

"He's quick. He's strong. He can pass. He can shoot. He can really do everything," Augustin said. "And he's just real strong. A lot of point guards are not as strong as he is, and he can just bulldoze them. 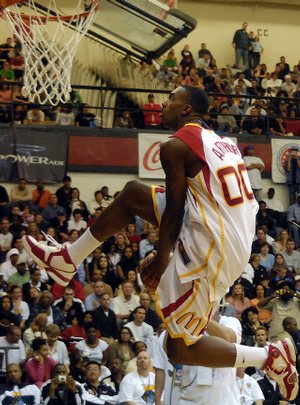 Ballyhooed prep Darrell Arthur passes the ball between his legs while attempting a dunk during Monday's dunk contest. Arthur and the rest of the McDonald's All-Americans will take the floor tonight.

"His quickness and his ability to score," added Carter about what caught his eye. "He's a great player, great player. I'm looking forward to playing against him."

Before that can happen, Collins must prove to the KU coaching staff he belongs on the floor.

Following tonight's game, he'll have a little less than five months to polish his skills before he arrives in Lawrence and begins the process of finding out just how he fits into the mix on a ballclub that many believe will own a preseason top-five ranking come November.

To win floor time as a college rookie, Collins will have to stack up against the likes of junior Russell Robinson and sophomore Mario Chalmers, each of whom saw significant time at the point during KU's just-completed campaign.

He likewise is ready to show he can handle the intensity that comes with suiting up for one of the nation's all-time winningest programs, while putting on a show for the Jayhawk faithful who pack Allen Fieldhouse 20-plus times each season.

Good Luck, Sherron! Can't wait to see you in the KU uniy.

Thank you Phog, could not have said it better. Also, I hope Sherron finds Darrell allot tonight, if you know what I mean (13 assists or more, Vaughns record).

I bet he's a fantastic player and will do great at Kansas . . . but he doesn't sound any too humble does he?

Really? Is his local Wal-Mart missing some items? ;)

I hear that Sherron was schooling those kids in practice this week.

" lone member of this year's class "

uhhhh .... not quite. brady morningstar and maybe one more..

Going back to the first comment, is he academically eligible yet?

One more note-I'm excited as hell about next year, but Collins going after the assist record in the McD's game is exactly what Sebastian Telfair was trying to do in the movie "Through the Fire." While Telfair is a great player, he seemed to me to be concentrating too much on improving his position in the draft and not his team. Let's all hope Sherron tries to copy Telfair's ability and skill, not his questionable motives.

Hey you can talk all the smack you want...whoever you are really a fan of there phog b/c it clearly isnt KU...the fact of the matter sherron isn't go to the NBA like deshawn and i highly doubt he's going to have any more trouble than Brandon did getting in...so you just sit back and enjoy the show...by the way good luck your new coach at MU there

this kid does have character and intelligence, I mean he's not on an internet message board saying crappy stuff about us.