Columbia, Mo. — Even in the most desperate times Monday night, Missouri's Thomas Gardner said he felt good about what was going to happen at Mizzou Arena.

"Everybody felt with a minute left in the game that we were going to send it to overtime or win it," said Gardner, whose Tigers trailed Kansas University by seven points with 39 seconds left. "No one on the court or the guys on the side felt the game was going to slip away."

The junior guard tallied a career-high 40 points - including a game-tying three-pointer with 5.6 seconds left in regulation, and then five more in the five-minute overtime - to help Missouri escape with an 89-86 victory over KU.

"I thought that this was going to be a game of heart, and we just had incredible heart," said MU coach Quin Snyder, whose squad improved to 10-5 overall and 3-1 in Big 12 Conference. "To be down like that and not quit playing is just great.

"Some of the experiences earlier in the year helped us do that," continued the embattled Tigers coach, whose team suffered a season-opening loss to Sam Houston State, fell on the road at Davidson and pulled out a one-point win over Texas A&M Corpus-Christi. "We've lost a couple of close ones, felt like we played well, and didn't want to give in." 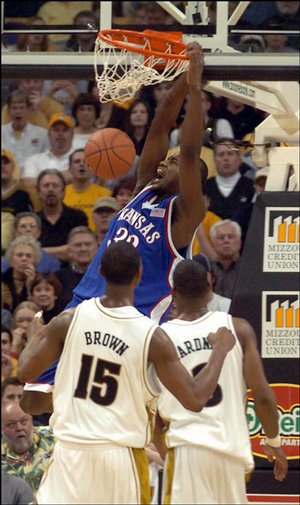 Plus, the Tigers caught one heck of a break when KU senior Christian Moody missed a pair of free throws with .4 of a second left.

"I don't know if there is a better crowd in the country after tonight," Snyder said of the capacity crowd of 15,061 that, despite the fact neither squad was ranked for the first time since 1991, filled the 2-year-old arena with plenty of noise. "Those were tough shots for him."

But so were most of Gardner's 13 field goals, including a handful of the seven three-pointers he hit off-balance.

"I got hot early. The rim looks real big, everything feels good coming off your hands," said Gardner, who earlier in the year had back-to-back 30-point efforts and said, while he had a similar type performance in high school, that contest couldn't compare to Monday's Border Showdown.

Gardner - who scored the most points against a Jayhawk squad since Anthony Peeler put up 43 against Kansas in Allen Fieldhouse in 1991-92 - hit 13 of 22 field goals and seven of 14 treys.

"I don't even know if he could do that again, but he did it tonight," said Mizzou teammate Kevin Young, one of three other Tigers to reach double figures with 14 points and nine rebounds.

While everyone in the arena had to leave impressed with Gardner's spectacular shooting display, Snyder signaled out an assist Gardner had late to Brown that was as big as any three-pointer.

While KU regained the lead one last time, Gardner won the game, hitting two different charities in the last minute.

"I told him (Snyder) I'm his leader, and I'm going to continue to lead this team through the Big 12," said Gardner, who a year ago had thoughts of transferring back to the West Coast, but on Monday embraced his coach right after the emotional victory. "I trust everything he's doing, and he trusted me."

Peeler trusted that if anything was certain Monday, his scoring record against the Jayhawks was bound to fall.

"He said he wanted me to break his record, but I think he was sarcastic. I might have had less points than him, but they had less points on the scoreboard," joked Gardner of Peeler's mark, which came in a loss at Allen Fieldhouse.