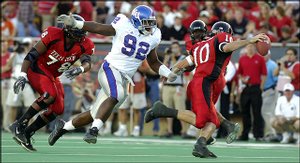 The high-flying, nation-leading Red Raiders offense, which scored on their first possession of the game, was grounded most of the night by Kansas' defense. But the Jayhawks struggling offense and untimely mistakes proved very costly in comeback bid.

"Hats off to our defense," KU receiver Mark Simmons said.

Indeed the Jayhawks defense gave up only one touchdown in the final 30 minutes to a team that had been averaging 66.3 points per game.

"I was proud of the effort of our defense most of the night," said Kansas coach Mark Mangino, whose team was trying to go 4-0 for the first time since 1997.

"As far as our offense, I didn't think we were crisp at all in the pass game," Mangino continued. "If it wasn't a misfire, it was a drop. If it wasn't a drop then it wasn't a really run route. Those are correctable things, you know we will get those things corrected."

Texas Tech's kicker Alex Trlica completed the scoring when he added a career-long 46-yard field goal with 4:44 left in the game to give the Red Raiders their final margin.

Just when it looked like Kansas was on the comeback, Brian Luke threw his second interception of the game when Texas Tech's Vincent Meeks slipped in front of KU's Dexton Fields to give the ball back to the Red Raiders, who had just been shut down by the Jayhawks' defense.

Moments earlier Kansas scored 10 points in a minute and half of action at the end of the third quarter and beginning of the fourth to cut Texas Tech's deficit to 27-17.

Kansas got on the scoreboard again. Brian Luke hit Mark Simmons in stride in the back of the end zone for a 17-yard strike with 1:13 left in the third to cut the Jayhawks deficit to 27-14.

Kansas marched 73 yards on seven plays with Mark Simmons and Jon Cornish both coming up with big plays.

Texas Tech answered Kansas' first score with another one of their own when Red Raider quarterback Cody Hodges scrambled in from five yards out with 10:20 left in the third to increase Tech's lead to 27-7.

Red Raider Danny Amendola should have scored the previous play after a long gain, but tripped himself up with no one in front of him at the five.

Jon Cornish's second effort was good enough to get Kansas on the scoreboard Saturday night.

The junior running back scored an 11-yard touchdown early in the third quarter after initially getting stopped by a huddle of Tech players near the line of scrimmage.

Kansas -- which couldn't get anything going on its first drive of the second half, despite a 19-yard run by Jon Cornish on KU's first play -- got the football back when Texas Tech quarterback Cody Hodges fumbled after trying to pump fake. Charleton Keith recoverd the fumble at the 23-yard line and ran down to the 11-yard line.

KU's offense could never find any rhyth in the first half.

Even when the momentum seemed like was turning around for Kansas, the Jayhawks could never capitalize on their opportunities.

After back-to-back sacks by Brandon Perkins and Charleton Keith, Texas Tech faced a third-and-31 at their own 28. Seconds later T. Tech had first-and-10 at the KU 27, thanks to a 45-yard pass from Cody Hodges to Jarrett Hicks. Red Raider kicker Alex Trlica added a 39-yard field goal.

Minutes earlier an instant replay overturned a Kansas first down in Texas Tech territory, giving the Red Raiders the ball back with 1:55 left at their own 36-yard line. On fourth-and-two Kansas' Brian Luke hit Mark Simmons for what the referees initially ruled a first down. However replay showed the Simmons clearly was short of the first down marker.

An even better example of KU's woes came after Brian Luke tossed an interception, Kansas Rodney Fowler got the ball right back with a pick of his own. He took the ball into the end zone, but a penalty negated what would have been the Jayhawks first score.

Kansas came up empty on the ensuing possession, despite subbing in quarterback Adam Barmann for Brian Luke.

Kansas punter Kyle Tucker was brought in to attempt a 51-yard field goal, but his effort fell a couple feet short.

With 10:48 left in the second Texas Tech took a 17-0 lead when Red Raider John Saldi recoverd a Brian Luke fumble in the end zone.

The Jayhawks drive never even got started because KU started from its own 20 with a delay of game penalty. Then came a false start, followed by a bad pitch by Brian Luke that never got to running back Clark Green. A gang of Tech players were in the area, but Saldi came up with the loose ball in the end zone.

Kansas, which was penalized on a questionable late hit out of bounds, probably got lucky that Tech running back Taurean Henderson tripped himself up at the 18-yard line on what might have been a touchdown run as he had nothing but field in front of him.

Nick Reid came up with a saving tackle on third-and-one when he drove Tech running back Danny Amendola back six yards.

Kansas went three-and-out on its third drive. Jayhawk Charles Gordon was lucky to be alive after getting absolutely nailed on a punt return. Gordon fumbled the football, but the Jayhawks recovered.

Kansas' second drive ended just like its first -- with another punt.

Texas Tech's Keyunta Dawson and Ken Scott sacked KU quarterback Brian Luke for a seven-yard loss. The Red Raiders nearly came up with another sack on third down. Earlier in the drive the Jayhawks picked up their second first down when Brian Luke pitched to Jon Cornish on an option run.

Kansas was forced to punt on its first possession. The Jayhawks picked up one first down, but a 15-yard penalty killed the drive. KU was actually lucky that a Brian Luke fumble was recovered by a Jayhawk.

Three minutes and 48 seconds to be exact.

Hick's short touchdown gave him 22 scores for his career, which ties him for Tech's all-time mark.

Kansas won the coin flip and elected to defer until the second half. Temperature at game time was 92-degrees with a 9 mph wind blowing from the southwest and 18-percent humidity

KU is trying for its first 4-0 start since the 1997 season tonight when it takes on Texas Tech at Jones SBC Stadium in Lubbock, Texas.

But much like the undefeated Jayhawks, the Red Raiders are also 3-0, having won all three contests in impressive fashion.

No. 16 Tech, which is off to its best start since 2000, leads the nation in passing, scoring offense, and total offense. The Red Raiders opened the season with a 56-3 win over Florida International before pasting I-AA opponents, Sam Houston State (80-21) and Indiana State (63-7).

Tech running back Taurean Henderson is the nation's leader in scoring with 16.0 points per game, having already scored seven touchdowns this season.

In last year's meeting Kansas took a 30-11 halftime lead, but a Henderson run in the final minutes led to Tech's 31-30 victory.

But the last time the Jayhawks traveled to Lubbock, Kansas pulled out a 34-31 double overtime victory.

Kansas, which is a perfect 14-of-14 on red zone opportunities this season, has not allowed a rushing touchdown in its last four games.

Over that same time span, which dates back to last year's Missouri game, KU has given up just 55 total points -- an average of 13.8 points per game.