The pact lasted about five seconds.

Once he hit the court, Maddox took off full speed, and from there it was all smiles for the 1988 national-champion teammates as they went head-to-head in the post.

"All of a sudden, he was moving and making cuts," Piper said. "It wasn't fair."

During the 10-minute game, the former Jayhawks played well. Piper hit deep jump shots, and Maddox threw down a pair of violent dunks.

"I'm going to tell everybody it was 10-foot basket, but I think it was closer to a 6-foot basket," Maddox said with a laugh. "I think I had about a two-inch vertical both times."

For both, the objective was spending time with their children at the two-day camp. 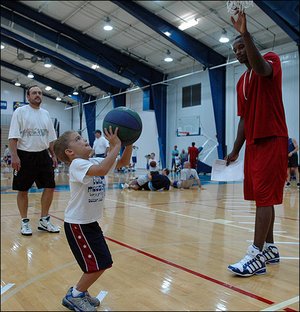 "That's the best part, just spending the day with him out here on the floor," Maddox said. "It lets him be around the current players. We're just having a great time."

Piper said he and 6-year-old daughter Madison each appreciated their time at the camp.

"It's a lot of fun, and it's great for the kids to have a chance to get out," Piper said. "I think more importantly it not only gets them involved in basketball, but also involved in Kansas basketball."

Patrick Richey, a contributor on Kansas' 1991 and 1993 Final Four teams, also was present Saturday with his brother and nephew.

"It's pretty cool, having guys like that around and bringing their kids," Self said. "It's always good to get those guys back."

Maddox said so many players returned to KU because of the strong ties Self kept with basketball alumni.

"It's a tribute to coach Self, who is very welcoming of the former players," Maddox said. "He does such a great job of making everybody feel like a part of the program." 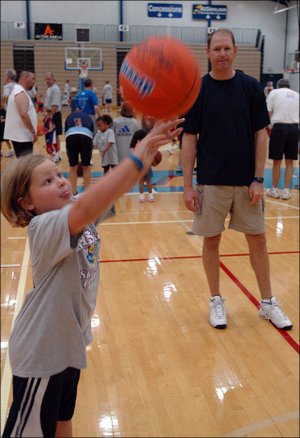 Piper said he always felt comfortable at his alma mater.

"It's always a place you can come back to," Piper said. "A lot of people here still remember Mike and myself, which is a surprise and an honor itself. But it's more about the kids, getting them involved, and having some fun."

The pair had fun with their children -- even if their bodies didn't always cooperate during the pickup game.

"That's the first time I've touched a ball in about seven years," Piper said. "It was a little rugged."

"J.R.'s a very good student -- he's been in good academic standing," Self said. "Although I can't legally comment on exactly where guys are academically, we have no players in our program that need to go to summer school to be eligible. All our players are eligible."

"I wasn't good and loose yet," Self said with a laugh.