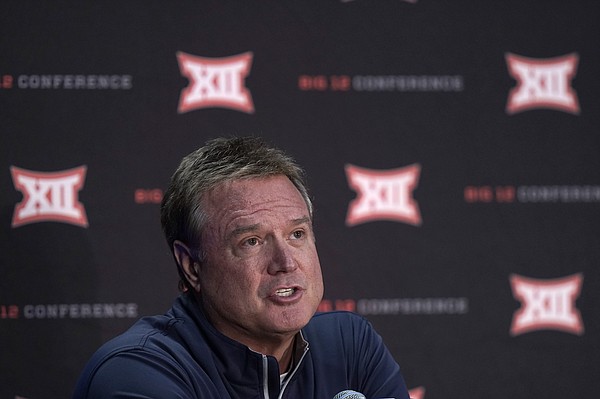 Kansas City, Mo. — Kansas basketball coach Bill Self said Wednesday that junior guard Christian Braun and third-year sophomore Dajuan Harris were the two Jayhawks who had made the biggest jump during the offseason.

Both players are among KU’s best defenders and Agbaji and McCormack said both also can shoot the ball from the outside.

Self has been complimentary of Harris’ game throughout the past several months. And he did not back down from that stance on Wednesday.

“Och is better, Jalen (Wilson) is better, but Juan and Christian have probably been our two most consistent performers,” Self said Wednesday. “Juan was pretty good at the end of the season last year, but he’s a lot better basketball player now than he was then. And CB, I think he’s gone from a guy who was a stationary shooter to now he can impact a game in more ways than just that.”

During the strange COVID season of 2020-21, Self made it clear that one of the things he liked was the more casual gameday attire worn by college coaches.

When asked Wednesday if he was planning to go back to the more formal look this season, Self smiled before answering.

“I’m not,” he said. “I don’t know what everybody else is (doing). I think our league is probably going to be casual for the most part. I don’t know how casual I’ll go, but I don’t think there’s going to be a lot of people wearing ties.

Self also took the question as an opportunity to take a playful shot at his good buddy and longtime West Virginia coach Bob Huggins, who has been wearing pullovers on the sideline for years.

“Bob Huggins thinks that he’s a trend-setter and he’s a great dresser and he’s basically changed the way college coaches look at attire,” Self began. “And he couldn’t be more wrong. The pandemic changed how everybody looks at it. It was not Bob Huggins. But he’ll take credit for it.”

After each of the first two, Agbaji raised his hand and said it was him.

McCormack did not debate Agbaji’s claim to top dog among KU’s dunkers, but he did encourage reporters to go look up the stats from last season when it came to who was a better shooter.

As for the best defender honor, the two agreed that Harris was a good choice, with Agbaji also mentioning newcomer Joseph Yesufu.

“Well, that’s disappointing,” Self said when told of their answers. “Because Ochai should say ‘I’m the best defender.’ But I would probably say that I don’t know who our best defender is. I would hope that somebody would want to take that and carry with pride that ‘I want to be that.’ And I don’t know that we have that yet.”

Part of Harris’ growth thru the season was gaining the confidence to take the shot. Because he seemed hesitant to shoot early in the season, teams sagged off him because he wasn’t a scoring threat. (Only because he wasn’t shooting. Not because he was some sort of reincarnation of Doug Gottlieb.) He needs to be a threat as well as a distributor. Hopefully, he and Remy can both balance each other and learn/grow playing against and alongside one another.

You have to admit that Harris has the ugliest, wonkiest-looking shot in CBB though. The weird wind-up and hitch release and the lower body board-straight and turned sideways... it's a weird thing to watch for sure but the result has looked surprisingly solid