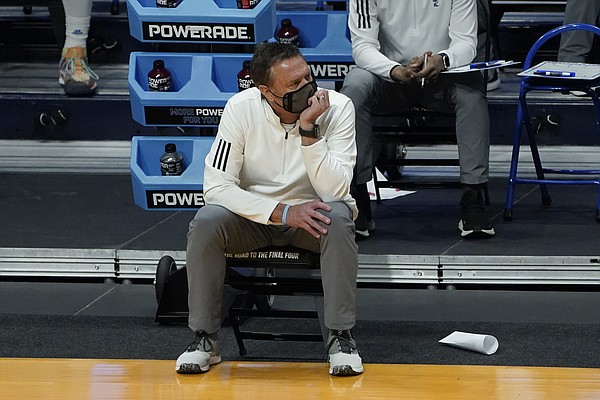 Kansas head coach Bill Self watches from the bench against USC during the second half of a men's college basketball game in the second round of the NCAA tournament at Hinkle Fieldhouse in Indianapolis, Monday, March 22, 2021. (AP Photo/Paul Sancya) by Associated Press

Still smarting from his team’s 85-51, season-ending loss to sixth-seeded USC on Monday night in Indianapolis, Kansas coach Bill Self talked about the Trojans the way dozens of past KU opponents had always talked about the Jayhawks.

Too big. Too long. Too athletic. Too talented.

It didn’t help that KU’s second-round NCAA Tournament loss at historic Hinkle Fieldhouse was the product of a perfect storm for a 34-point rout, with USC playing one of its best games of the season and Kansas one of its worst.

But even on the Jayhawks’ best night, with this Kansas roster, USC’s may have been too big — literally and figuratively — for Self’s team to overcome.

That fact was not lost on Self, who said he hurt for his players that on the biggest stage and in the most important game of the season they were never really in the game.

Another bad start by KU, in a season marked by them, cemented that. And USC became stronger, looser and more confident as the game progressed. The Jayhawks never appeared to lay down. But the Trojans never gave them a reason to think they could play on their level either.

Self, who is now 0-4 against Pac-12 teams in the NCAA Tournament during his time at Kansas — with two of those losses coming in the past four NCAA Tournaments — discussed that after Monday’s loss. And he did it in the context of what it would take for Kansas to get there again in the years to come.

At this point in the game, the player development part of that equation might be Self’s best bet for immediate improvement.

For one, the NCAA’s infractions case against Kansas remains unresolved. And Self has made it clear that the lingering cloud’s impact on the program has had a negative impact on recruiting in recent years.

For two, KU figures to return nearly everyone from this season’s roster and will be adding Class of 2021 signees K.J. Adams and Zach Clemence, two four-star prospects ranked in the Top 75 by Rivals.com who will bring a fair amount of athleticism and versatility to the 2021-22 squad.

But given the fact that those players have already been lined up for the 2021 class and most of KU’s 13 scholarships already will be spoken for, KU’s efforts to enhance the program’s athleticism via a major overhaul may still be a recruiting class or two out.

You never know what can happen in an offseason at any college program.

Sometimes players decide to transfer out. Others decide to leave school early. And with the transfer portal becoming as popular as Blockbuster Video on a Friday night in the 1990s — and the expected passage of the one-time free transfer rule on the horizon — there could be more movement than ever this offseason.

Things have certainly been trending that way in recent years.

It’s still too early to know if either of those paths will affect KU’s roster in the coming months, but if Self stands pat with what he has and what he already has signed in the incoming class, there just is not a lot of room to add immediate help.

That’s why the player development part of KU’s future is so crucial.

It’s hard to imagine Monday’s 34-point massacre not being a factor in that. Anyone who played a role on this year’s team who returns next season likely will be motivated and driven by that final score and the awful feeling the Jayhawks had inside Hinkle Fieldhouse on Monday night.

So they’ll work to push past it and avoid that feeling again in the future. And what this group did in 2021 is any indication of its potential in the future, there’s plenty of reason to believe everyone who returns can and will get better heading into the 2021-22 season.

“I think our guys maximized their individual abilities pretty well," Self said. "But our margin of error was small. I think that there was less margin for error on this team probably than any team we’ve had since I’ve coached here."

Stay in touch with KUsports.com throughout the weeks ahead for a breakdown of KU’s returners as well as coverage of KU’s efforts on the recruiting trail.

As for room on our roster, any idea how Gonzaga's men's basketball team can list 18 players on its roster currently?

And they have over30 Red Shirted

IMO Mr. Grant-Foster has it, maybe the most on the team, he just needs to consistently get it under control.

Kansas has had teams that were bigger, longer, more athletic, and more talented than the motley crew of misfits that made up the 2020-21 roster. But all but one team (the 2007-08 team, of course) bowed out of the NCAA Tournament before they should have. And Bill Self's coaching is to blame for that.

Yes, we need bigger, longer, more athletic, and more talented players than what we have now. But we also need a better coach, too. I hear John Belein is available; he's been to the NCAA title game twice since Self last got there (2013, 2018).

While I wouldn't go as far as Mr. Landon, I know that Kansas should not lose to anyone by 30+. Ever. Anyone knowing how businesses work and this is a business, the CEO always gets blamed for the low earnings or bad publicity, just the way it is. Is USC a better team than Kansas. This year's team was. But still, these slow starts from the team start with coaching and this has to be rectified. 0/8 isn't a great way to start.

zach clemence will help with length and shooting. a 6'10 true "stretch 4" who shoots almost 50% from 3? yes please. may be the best shooting "big" self has ever landed. exactly what this team needs.

KJ looks very athletic and ready to go on day one.

Seems like Gethro should have gotten more playing time early - even at the expense of some wins - so we'd have 2 bigs instead of one by tourney time.

Worst coaching job in the country.

Couldn’t compile a competitive roster at a blue blood school. Couldn’t win the weakest conference in the country. Barely beat a directional school while giving up 80+. Curb stomped, again, in the tourney. Then says that the players he recruited and signed aren’t good enough.

And don’t bring up Cal. He’s been awful forever. That bar is too low for anyone.

Time is up on this dude. First question in the AD interview: could you replace Dollar Bill with an actual Jayhawk-level coach?

Well past time to move on. We all need a Silkwood-level shower.

Coach, the question is, what are you going to do if you do have those kind of quality recruits? Are you going to ask them to execute great defense, and help rebounding? I hope not!!! Boy.. I miss Josh....

Coach, it takes more than just athleticism to win it all. If you don't believe this type of player will help you win the NC, it's insane... Are we even recruiting this kid?

Bryce, can you go find some other team to be a fair-weather fan for? You've already abandoned the football team and it would be appreciated if you'd find another basketball team to complain about as well.

Bill self has been to 50% of the Elite 8's and 25% of the final 4's since 2010. If that's not good enough for you, good luck finding a better team/coach to cheer for (I mean complain about when they don't exceed your idiotic expectations).

Losing by 30+ in the second round (by the least talented team of the Self era) sucks but it doesn't mean a grown man has to act like a little 8itch in every thread. Haven't you learned how to control your emotions and act rationally yet? You've said the same thing in the past and then had to apologize for it. Did you learn nothing by your past actions?

KU won the National Championship in 2019-2020 with Udoka Azubuike , Devon Dotson, and Isaiah Moss. This past year’s team was playing with the remnants - smaller, less athletic, and less talented. I’m amazed that Bill Self could get 20 wins out of that klunky roster. The end was telling.

The ‘21 club was, more than anything, the worst defensive team Bill Self has ever had. He is known for being a defensive-minded coach who expects his players to apply pressure, take the ball away, get into transition, and score a lot of easy buckets. This team didn’t do that very often.

Look for some changes that help resolve the issues.

I want to see what Tristan can do with more minutes and confidence next year. He's a talented kid with 7' wingspan and perfect wing size & euro-game skills. if he shows a solid mid-range jump shot, he's a great way to increase length and athleticism on the perimeter. I could see him and JW starting together at the wings

oh... and for that to happen he obviously needs to prove he can shoot the 3 like JW too. If so those guys could be a hard to handle since they can crash the glass and rebound like bigs

I don't see Braum and Agbaji improving that much .Their really good kids but unless they improve with their total game, big time improvement....it' not there! Average offense and poor defense. That certainly showed. Good players make everyone much better,,,,,That this team does not have.

Its so frustrating to see someone with Abaji's elite athleticism not able to create his own shot at all. 3s, run-outs, and lobs- and that's it. If you're not an aggressive scorer by the end of Jr. year, then I don't think it's going to happen...

I disagree with it. Look at the Nova and Virginia teams. They weren't super athletic. This is a cop out. Bill just needs to get back to coaching and change his game plan.

Keith, go back and look at the tape. Villanova was extremely athletic, they weren't big, but oh they were athletic, and they could shoot the lights out, every one of the five starters.

Brett You go from the ridiculous to the mundane. Who do you think would win 15 conference championships in a row. And have a streak of 20 win seasons, no exceptions, and every year in the NCAA tournament. You want to have an totally unprepared football coach, but you want a god for basketball coach. I saw Ted Owens when it was really bad at KU, you have no idea.