More lineups with both Marcus Garrett and Dajuan Harris in them coming for KU? 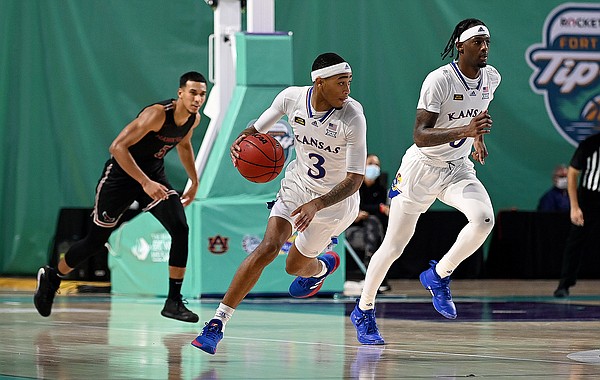 Kansas redshirt freshman Dajuan Harris brings the ball up the floor during a game against Saint Joseph's on Friday Nov. 27, 2020. The Jayhawks earned a 94-72 win over the Hawks in the Rocket Mortgage Fort Myers Tip-Off at the Suncoast Credit Union Arena in Fort Myers, Florida. by Photo by Chris Tilley

In search of ways to lighten the load for senior point guard Marcus Garrett, in hopes of getting him fully going again, Kansas basketball coach Bill Self hinted at something on Thursday that might have provided a clue about Self’s plans.

“I do think he needs to look for his perimeter shot more,” Self said at the tail end of an answer about whether he might try to change the way Garrett attacks.

On the surface, that might sound a tad strange. Especially to die-hard KU fans who have spent the past few seasons emphatically stating that Garrett can’t shoot.

Mario Chalmers or Svi Mykhailiuk he is not. But that 3-point percentage is dragged down quite a bit by sub-27% marks during his first two seasons as a Jayhawk.

If you take into account just his junior year and the games he’s played so far as a senior, Garrett’s actually a 32.5% 3-point shooter. That mark, for a single season, would put him among the top 100 3-point shooters in Division I this season.

So he can shoot. And if Self thinks he should be shooting more, there has to be a reason why.

In actuality, there are probably two.

The first has to do with the overall flow of the Kansas offense. If Garrett is a threat to shoot from the outside and actually does let it fly more than the two times a game he’s currently pacing at, opposing defenses would have to consider extending out to guard him tighter more often and that would open up more driving lanes for Jalen Wilson, Christian Braun and Ochai Agbaji.

Basic stuff there. But important stuff, too.

The other reason Self might want Garrett to shoot the ball more addresses an idea that might speak to Kansas fans a little more directly.

Perhaps Self’s desire to have Garrett shoot the ball more from the outside is a tonic of sorts to the concerns about playing Garrett and redshirt freshman point guard Dajuan Harris together.

Self has talked in the not-too-distant past about the desire, in today’s game, to have three shooters on the floor at all times.

Even with Garrett and Harris out there together, which would boost KU’s defense and ball handling, KU could have that if Ochai Agbaji, Christian Braun and Jalen Wilson are the other three on the floor.

What’s that give you? Five guards. And although we’ve seen that from Kansas at times this season, that approach has not been used nearly as much of late.

The reason? KU big man David McCormack has become a more reliable option down low and Self has had a hard time taking him off the floor. Even though McCormack’s range reliably extends out to 15 feet, he does not provide any real outside shooting.

So if the Jayhawks want to have McCormack (or surging sub Mitch Lightfoot) out there the majority of the time and also want to play Garrett and Harris together during certain stretches, they’re going to need one of the two point guards to be that third shooter.

And it’s time for him to let it fly more often to see what that — and, in turn, more minutes for Harris — can do for this Kansas offense, which averaged 82 points per game in nonconference play and is down to 70 points per game since opening competition in the Big 12.

I believe Harris is the only true PG we have that is ready to play. Thompson has been hurt & his early freshman results have indicated he still has much to learn along with needing to be stronger physically as well.

When Garrett was hurt & didn't play vs TCU, Harris came in & did a great job running the show. We blew them out on the road by over 20 points & KU looked like an entirely different team.

We all know that we're know nearly as strong a team without Doke & Dot & our margin for error is much smaller. With Harris running the point, we can not only compete, but have a good chance to win most of our games.

I agree with your statement. Harris brings an entire different tempo to the offensive side of the court.

And, Harris quick hands are great on the defensive side of the court as well. I have NOTHING against M. Garrett at all. He does bring Senior leadership to the court. But, he's not the PG that gets the ball moving down court with any upbeat tempo.

During each and every game, there's a time for such upbeat and a slower tempo.

But, it seems that the Jayhawks are playing in the swampy muck a lot of the game.

I really like the idea, particularly after seeing Harris do well at TCU. He's actually a better point guard than Garrett, and Garret would do better as a shooting guard.

I also think that since McCormack is so unreliable, he should come off the bench.

I'm not a coach...just making a fan's observation. Our half-court offense can really labor against very athletic teams. And...duh...so do most teams.

I'm quite sure that Coach Self sees the same thing. I'm also sure that he can and will jigger the offense to better suit our personnel.

This should have happened sooner. It was obvious we needed a real PG. Harris will be great later in his career. He will be a much needed stabilizing force for now.

Jerry, I'm with you.. we might see more of Mitch on the floor. I'm not sure anymore about Dave. Sometimes he shows promise, but against athletic teams, he's got nothing. The only way to make these bigs productive is by designing plays other than low-post feeds, that's where Harris' role is needed. Badly.