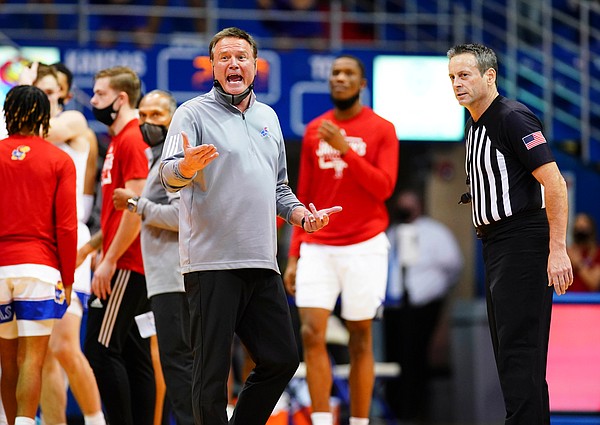 Kansas head coach Bill Self disputes a call with a couple of officials during the first half on Thursday, Jan. 28, 2021 at Allen Fieldhouse. by Nick Krug

Kansas basketball coach Bill Self has always been one to put the greatest emphasis on the things right in front of you, worrying less about the big picture and more about the next moment.

Sure, the Jayhawks have had goals. And, yeah, they’ve talked about their potential and what it would take to get there.

But most, if not all, of that has always come second to the idea of executing the next play, the next possession, the next half and the next game.

On Wednesday, Self dipped a little further into that concept by explaining how he always has viewed the Big 12 race, of which KU is firmly out of the running this year.

“I've always taken the league two games at a time,” Self said this week. “I've always done it a week at a time. You know, this is the most to most important (game because it’s the next one).”

Self admitted that the approach utilized a little coach speak, but it’s also one that has worked awfully well for the Jayhawks, who have won the Big 12 title in 15 of Self’s 17 seasons and finished tied for second and third in the other two seasons.

No one’s catching unbeaten Baylor. So this thing is now a race for second place. And the Jayhawks believe they can still get there.

“We still have a chance, because the league’s so competitive, to have a right to fight for second. That could also be seventh, but we're right there to fight for second and that's what we’ve got to do,” Self said, noting that he can’t see any team “coming close to catching” Baylor. “(Finishing second) would be a terrific accomplishment for anybody in our league.”

The schedule says it’s possible, with games against Texas Tech (6-5), Baylor (9-0) and Texas still on the schedule, along with a winnable stretch of three straight in the next week against K-State (1-11) and Iowa State (0-9).

But there’s little doubt that the Jayhawks will have to play their best basketball of the season to make it happen. And while that’s the stated goal and the big picture vision of the KU players and coaches, it’s also what makes Self’s approach of a week at a time so critical right now.

Kansas can’t worry about beating Texas on Feb. 23 or Baylor on Feb. 27 — at least one will likely need to happen for Kansas to finish second — at the risk of overlooking ISU and KSU.

So it’s all-in on the Cyclones for the next four days, and that’s exactly why Self called KU’s next two games the biggest games of the season.

After those are behind them — win or lose — it’ll be K-State and Texas Tech that become the biggest games of the season.

And so on down the line.

And that would not win the conference title either.

So the goal of focusing on second place and fighting like hell to get there is a good one for this Kansas team. It gives them something attainable to focus on and forces them to confront the fact that unless they’re locked in and executing at the highest level they have all season, it’s probably not going to happen.

“Playing well or poorly, either one certainly creates momentum at a time where you need positive and you don't need negative,” Self said.

KU’s first step of it’s next two-game set comes at 6 p.m. tonight, when Iowa State comes to Allen Fieldhouse for the first of back-to-back games with the Cyclones this week.

Baylor is not going to play all of its conference games.

There are very few teams in the nation that have played as many games as KU. While each is a possible loss, each is also extra wear and tear vs being rested.

Can you be a champion without playing the games?

Why did coach BS worry about B12 ranking (surprise, surprise)?

He should worry about his team playing together better first. He has a lot to address his team. We don't have consistent shooters, we've been playing like we belonged to YMCA or NJB, inconsistent big's production, stinky offense (laughable).

Tonight's win against ISU is a step closer. I'm not talking about B12 ranking, a step closer to build a better team, a better KU MBB team. A real collegiate bball team. Let's talk about how to improve, how to elevate individuals' confidence, how to keep them focus on playing to make each other better, making each shot counts, each layup counts, each J, each hookshot counts - which this team's really lacking. We beat a winningless B12 team, but I'm pretty sure if we keep playing like this - we'll be harder to beat. And most importantly, our kids will be getting better and better!

We'll be up there if we have the right mind and focus, eventually.