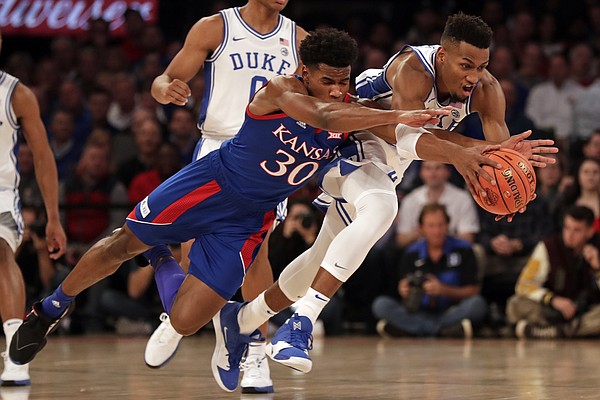 Now that we know the start date for the 2020-21 college basketball season, it’s time to start diving a little deeper into what the Kansas men’s basketball schedule might look like.

While four games on the schedule were slated to take place before the new Nov. 25 start date, it’s likely that at least one of them will be saved.

That, of course, is the Champions Classic clash with Kentucky, previously scheduled for Nov. 10 in Chicago. Recent reports indicate that the event, which also features Duke playing Michigan State, could be moved to a bubble-type setting in Orlando, Fla., where seven other early-season hoops tournaments could be moved.

Here’s a fun thought that would help offset the loss of those three other games: Why not replace them with KU vs. Duke and KU vs. Michigan State, as well?

Yep. We’re talking full Champions Classic round-robin fun in 2020. What better way to kick off a new college basketball season than that?

You wouldn’t want to do this every year, of course. There’s something fun about the rotation of the three opponents and taking the show to different cities each season. But this season, when good games are at a premium and adjusting to these last-minute scheduling constraints is a little tougher than normal, why not take advantage of what’s already in place?

If the event does in fact get moved to Orlando, all four teams will already make the arrangements and go through the necessary steps to make the first two games possible.

At that point, why not add two more per team? They would all already be approved to be in the bubble and the testing and protocol put in place for the event would help ensure that each team could play two more games, as well.

Start it on Nov. 25, a Wednesday, with KU vs. Kentucky and Duke vs. Michigan State.

Give the teams Thanksgiving off and a couple of days to prepare and play the next doubleheader on Saturday, Nov. 28, with KU facing Michigan State and Kentucky playing Duke.

After that, a couple more days of rest and preparation is followed by one more doubleheader on Dec. 1, a Tuesday, the day the Champions Classic is typically played, with Kansas tangling with Duke and Michigan State taking on Kentucky.

Just like that, in a week’s time, you’d have college basketball running full steam ahead and four of the top programs in the country would have three quality games already under their belts.

That would leave the rest of December to complete nonconference play, and, there would be plenty of time to get it in.

Heck, at that point, since you’re already down there in a controlled environment, why not have Georgetown, UCLA and Virginia come to Orlando right after that to knock out the Wooden Legacy tournament that was supposed to take place in November? That event was also on the list of those that could potentially get moved to Orlando.

Play those two games (matchups have yet to be determined) Dec. 3-6 and head home needing just four more non-con games in the next four weeks, which would work well with the holidays and final exams in there, to get to nine, setting up the 18-game, Big 12 round-robin schedule that would get you to this year’s maximum number of games allowed by the NCAA of 27.

The biggest advantage to playing five of the nine non-con games in Orlando — beyond the quality of the competition — would be the fact that you're eliminating the risk of one of the teams having to cancel because of a 14-day quarantine or anything else virus-related that could pop up and derail a schedule.

After Orlando, the four nonconference games in December could be spectacular, too.

KU and Mizzou could keep their game at T-Mobile Center on Dec. 12.

Creighton could still come to Allen Fieldhouse the following week, and, depending on what the Pac-12 is doing by then, you could still easily fit in the Colorado and USC games before the end of the year.

If the Pac-12 is out, KU would need to keep just one of those games on the schedule — say Stephen F. Austin — and could still be in position to play the Big 12/SEC Challenge game in January if that event remains on the schedule.

It’s certainly different, and it would take some getting used to, but with only nine non-con games available under this year’s rules, knocking out five of them in Orlando right away sure makes a lot of sense.

The fact that those five games would be stellar matchups with mega programs is merely a bonus and something that college basketball fans across the country would surely love.

Wednesday to Saturday minus Thursday only leaves one day of prep, not “a couple”.

Playing a couple challenging games in a week is the NCAA tournament and occasionally gets even denser in the middle of the season, but seems harder to envision positively from a coaching perspective when thinking of trying to get a new team working together.

Extended stays in the bubble also work well for professionals, but would seem more challenging for students.

I hear ya, but you'd essentially be getting all of Thursday to rest (you could watch film and/or have team meetings while still resting) and then you'd get Friday to practice and rest and Saturday morning/day to do a final walk-through and film session.

Plenty of time in there to get that done. Way more time than those Saturday/Monday Big 12 turnarounds.

I realize it's a new team, but they still have two months to practice before playing Game 1 and I think they're all going to have to just accept that, in order to play and get certain games in, they're going to have to be OK with things going a little differently than in normal seasons.

Embrace it and have some fun!

Waaayyy too good an idea to ever come true!!! :)

Perhaps... Let's hope not, though. It would be outstanding and make a ton of sense! I'm going to start poking around to see if this is being talked about. My guess is it is.

Actually Matt - - that is a really good idea , hell of a non con , I like that

It's a great idea. Maybe just add a whole tourney with the 4 teams plus UNC, Vanderbilt, Connecticut and Syracuse or something like that. Would be great for all programs involved. Each team would still get 3 games and it would be beneficial for them down the road as well as it will give them all a measure of where they are early on in the season and give the guys some good experience. Just make it a complete tourney with 3rd place, 5th place, and 7th place games.

Makes a lot of sense... so much, it likely won't happen.

Maybe we could have an Elite 8 with the eight best teams from last spring. Even though the players will have changed, it could be a pre-season tourney the way the Big 8 used to have the preseason holiday tourney, though this would be Thanksgiving as the holiday instead of Christmas/New Years. Or even the pre-season NIT?