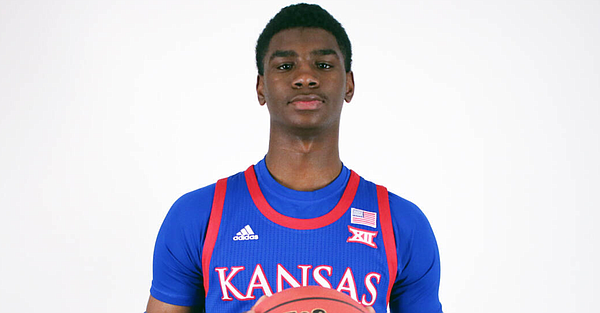 Class of 2020 guard Tyon Grant-Foster, who joined the Kansas men's basketball program after two seasons at Indian Hills Community College in Iowa, will wear jersey No. 1 for Kansas during the 2020-21 season. by Photo courtesy of Kansas Athletics

Junior college transfers are a rare sight in the Kansas basketball program, but the Jayhawks believe they found a good one in 6-foot-7 wing Tyon Grant-Foster.

Just how good remains to be seen, but there are some high hopes and big expectations being attached to Grant-Foster, who comes to KU from Indian Hills Community College by way of Kansas City, Kan.

His size, length, athleticism and natural scoring ability make him one of KU’s most versatile weapons and, at the same time, KU’s veterans and other capable scorers will keep the pressure off of him in Year 1.

The guess here is that he’ll be one of those players who progresses month by month and makes some pretty big jumps in January and February.

Here’s a quick look at what you can expect from Grant-Foster in the months ahead.

He will: Need some time to find his footing

Shortly after the Jayhawks reported to campus in early August, Grant-Foster sustained a minor ankle injury that slowed his early progress and made things hard out of the gate.

While that alone qualifies as him needing some time to find his footing, I’m expecting it could happen when the season gets going, as well.

Grant-Foster was a full-go for boot camp, and KU coach Bill Self said last week that the 6-foot-7, 190-pound wing was “on an uptick.”

That’s a great sign that the ankle injury is behind him, and, as long as it is, he can spend the rest of the preseason studying KU’s playbook and figuring out how he fits into what KU runs.

All of the practice time in the world can’t replicate what he’ll experience on game nights, so the learning curve will reemerge when the games get going in late November.

But as long as the coaching staff and KU fans are patient with him, Grant-Foster should be a big time addition to the rotation.

He won’t: Be much of a factor as a 3-point shooter

Even though Grant-Foster hit 33.5% of his 3-point tries last season, shooting from distance likely won’t be a huge part of his role at Kansas.

That’s not to say he won’t take the occasional rhythm jumper from behind the 3-point arc. It’s just not likely that KU will need — or want — him to do that.

Grant-Foster’s game is attacking the rim and creating off the dribble. And he also figures to be a beast in transition and in flying to the rim to catch lobs and create offensive rebound chances.

You can’t do either of those things from outside of the 3-point line, so don’t expect Grant-Foster to live there very often.

Think of him a little like Josh Jackson, but not quite with the No. 4 overall pick in the NBA Draft pedigree. Remember how often KU started games with the dribble hand-off action out of which Jackson would turn the corner going right and attack the rim?

Those are the types of things you should see from Grant-Foster and that’s what his teammates have seen in the first several days of practice.

David McCormack, Mitch Lightfoot and Marcus Garrett all recently used the words “athlete” “attack” and “scorer” when describing what Grant-Foster brings to the table, and given that these Jayhawks will be looking to replace 54.3% of their scoring from last season and that they should score more this season, means there should be plenty of opportunity for someone like Grant-Foster to become a double-digit scorer right away.

With all of that being said, I don’t think it’s crazy to think that Grant-Foster could be in the mix for the title of KU’s leading scorer by the time the season’s over.

He wouldn’t be my first pick (that’s Marcus Garrett), but his skill set and his mentality and his ability to score inside and out, off the dribble, above the rim and at the free throw line all make him a solid choice.

Beyond that, it’s not like he’d have to follow in Devon Dotson, Frank Mason III or Devonte’ Graham’s shoes to get there.

While those three former KU All-Americans all averaged at or around 20 points per game during their best seasons, Grant-Foster is likely on a team where the top scorer’s average points per night will be closer to 13 or 14 points per game.

You all know that Self loves teams with balance and he loves it even more when those balanced teams are led by balanced scoring. There’s no better example of this than the 2008 national title team, but there have been others in that mold since then.

I really think the biggest thing Grant-Foster has going for him as a scorer in Year 1 at KU is his willingness to attack the paint and the easy buckets and free throw opportunities that will lead to.

In 31 games last season at Indian Hills CC — where he averaged 16.5 points per night over 31 games — Grant-Foster got to the line 151 times (nearly five times per game) and connected on 72.2% of his attempts.

If those free throw numbers can be replicated at KU, he should easily be a double-digit scorer and perhaps much higher than that.

It is good to know he gets and makes FTs.