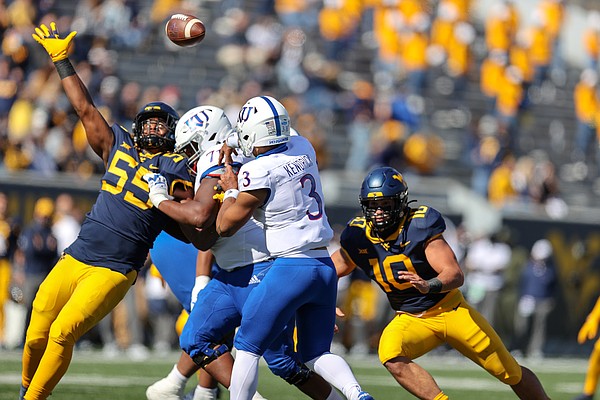 MORGANTOWN, WV - OCTOBER 17: Kansas Jayhawks quarterback Miles Kendrick (3) throws a pass during the first quarter of the college football game between the Kansas Jayhawks and the West Virginia Mountaineers on October 17, 2020, at Mountaineer Field at Milan Puskar Stadium in Morgantown, WV. by Photo by Frank Jansky/Icon Sportswire

For nearly three full quarters of Saturday’s 38-17 loss in Morgantown, W.Va., the Kansas football team did all that its disgruntled fan base has ever asked it to do.

Before Leddie Brown’s 87-yard touchdown run put the Mountaineers up 24-10 with 3:37 to play in the third quarter, the Jayhawks had managed to hang around.

Credit for that goes to D.J. Eliot and the KU defense, which did everything they could to keep Kansas in it, from turnovers and big hits to snapping their chin straps up and running back out there all afternoon.

But the Jayhawks got absolutely no help from their offense and therefore never really had a chance once the Mountaineers (3-1 overall, 2-1 Big 12) took the lead after gifting Kansas a 10-0 head-start to open the game.

Maybe you were surprised that the Jayhawks (0-4, 0-3) were able to hang around as long as they did. Fair.

Maybe you were even encouraged by some of the individual efforts. Good for you. Or maybe you stopped watching a long time ago. Hard to blame ya.

Either way, as the season continues to deliver disappointing results for the Jayhawks, those of us still watching continue to try to learn about this team.

Most of it leads to questions for which there are just no answers.

Here’s what we learned this week.

• Miles Kendrick is not the solution at quarterback. The junior who coaches and teammates laud as a great leader, made his first start of the season and got a full game to show what he could do. The KU offense responded with one of its worst showings of the past two seasons. The blame for that does not fall entirely on Miles. Not by a long shot. But this team needs a quarterback that can spark something when there’s absolutely nothing there. When freshman Jalon Daniels is back from injury, the job should be his. Until then, if needed, Thomas MacVittie can have one more chance.

• KU’s coaching staff and players had two weeks to figure out some kind of fix or fancy new approach for the offensive line and came up with nothing. Guys are trying. Coaches are working. They just do not have the horses. Nothing but time will change that. Moving the pieces around won’t help, and shoddy O-line play means no shot on Saturdays.

• Because of those first two realities, there really is very little hope for Pooka Williams Jr., this season. Give him the ball on every play or don’t. Put him in space or don’t. Let him return kicks or don’t. It doesn’t look like it’s going to matter. Even Williams’ lone highlight on Saturday — a 92-yard kickoff return for a touchdown in the final two minutes — came long after the damage had been done. Outside of that, Williams touched the ball 14 times and gained 28 yards.

In his postgame meeting with the media, acting head coach Joshua Eargle — a bundle of positive energy if ever there was one — talked a lot about how close Kansas was in a lot of areas.

That’s all well and good, but at some point the Jayhawks either have to stop doing the little things that are hurting them or admit that the things plaguing this program are bigger.

Even with that positive spin to another rough Saturday, Eargle correctly noted that until the Jayhawks get things down in practice and carry that over to game days, it’s going to take time to get over the hump.

“You can play as hard as you want to, and you can want it really, really bad,” he said. “But it’s going to come down to execution.”

And it’s not going to get any easier to execute in the next month. Next week, the Jayhawks are slated to play at No. 22 Kansas State and they follow that up with a home matchup with No. 20 Iowa State, a road trip to unranked Oklahoma and a home game against unranked Texas in three of the four weeks that follow.

Really only one goal at this point. Hold the recruiting class together. If you don’t, it’s over.

I don't expect the coaches to throw the players under the bus -- but executing and fixing the little things is not the answer.

The biggest reason for this train wreck of a season is the gawd awful talent and play of the OL. Teams key on Pooka and he has ZERO places to run. KU QBs don't have any time to read the defense -- they have about 1/2 of a second before they're running for their lives.

Having no offense means an out manned defense is forced to spend too much time on the field.

I don't mean to demean the effort but until the OL is replaced with better talent...there is no solution.

I don't know if Jim Hannifan can even fix this OL.

Our roster is 116 players, same as OU. Our recruiting class over the last five seasons is comparable to K-State. Actually a little better but while we gave out 104 scholarships they had 120. Are the 16 fewer scholarships over the last five years the reason why we are so noncompetitive? If not, Les and his coaching staff are not doing the job we hired them for.

That plus the older players are not Les' recruits. Some of the older players are quality players. But there are so many holes needing filling that it will take awhile to bring in high schoolers and develop them into what we need. If you want to see what they are doing in regard to what they were hired for, look at their first two classes and then also look at the 2021 commits. No guarantee we keep all the commits but it's better than that list has looked at this stage of the season in a long time. Plus, Miles' first class was put together in, what, six weeks or so? A solid rebuild takes time. And patience, which seems to be in short supply here.

Fortunately, we have and AD and Chancellor who recognize what it takes and are willing to "stay the course."

Good points but I don't buy the argument that if Les didn't recruit them he can't be responsible for their development.

I don't believe I said he's not responsible for developing them. Thought I was saying it's not right to slam his recruiting when many of those playing are not his recruits.

The OL needs time and a lot of work. As for QB, Kendrick can’t play that position. Don’t do that again.

This roster needed spring ball, a full preseason of practices and the complete nonconference schedule. It got none of that. Let's stay on board with Miles. He's the first coach in years that hasn't tried to plug holes with graduate and junior college transfers.

If you are old enough to remember when Glen Mason took over after the Bob Valesente debacle, the first three years you simply looked for improvement. It came slowly but the AD and Mason stayed the course and we eventually got competitive. I've seen lots of improvement on the defensive side of the ball since week one. And their doing it with a bunch of young players.

The OL has got to be the focus over the offseason. If you're a 3 or 4 star quarterback would you even consider KU when every snap is just "run for your life"? Even a playmaker like Daniels has little opportunity to make plays when given no time to read the field.

The big question after year three is will Miles be given a contract extension. We've all seen where recruiting hinges a lot on players feeling confident that the coach that recruits them will be there for the majority of their career. It's critical that by the end of Miles' third season that there is reason to extend his contract. If not, the revolving coaching door will probably continue.

O-line and QB should be #1 and #1a priority for any spots open in our recruiting class. Maybe Daniels is the answer in time, but right now I don't see a QB1 for Big 12 football on our roster and it won't matter if we get a QB, because I'm not sure I've ever seen worse O-line play ever. Doubtful that a year of game experience and offseason weight training will make THAT much difference for next year....... yes, I'm already talking about next year again...... 4 games in. I think we're getting some good recruits in here, it's obvious to see, but we've got to do better on the line and on QB's.