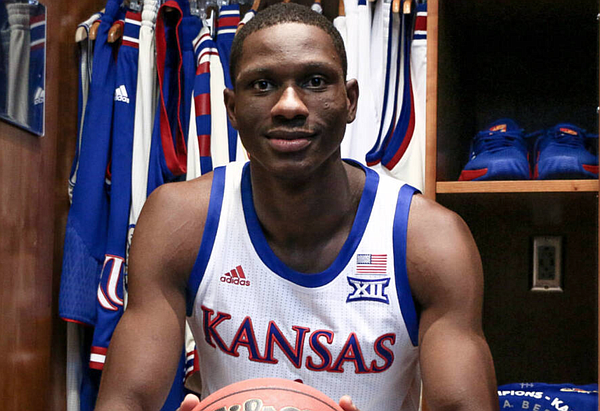 Incoming Kansas freshman Gethro Muscadin announced on May 23, 2020, that he will wear No. 35 for the Jayhawks during the 2020-21 season. by Photo courtesy of Kansas Athletics

The outlook for Kansas freshman Gethro Muscadin during the 2020-21 season changed dramatically in mid-October, when KU senior Silvio De Sousa announced he was leaving the team.

Just like that, Muscadin went from a likely redshirt candidate with little chance at playing any kind of real role to a valuable part of KU's front court rotation.

As such, the pressure for Muscadin to get up to speed sooner rather than later was ramped up, with the 6-foot-10, 220-pound freshman now facing the potential to play some key minutes as a reserve right away.

The Jayhawks primarily will play with four guards this season, leaving upperclassmen David McCormack and Mitch Lightfoot to handle the 40 available minutes at the lone big man spot in KU's lineup.

However, should KU face a team with great size or if Lightfoot or McCormack encounter foul trouble or injuries, Muscadin likely would be asked to play more.

Here's a quick look at what that might mean.

He will: Improve at a rapid rate, day by day and week by week

Because of the way he’s wired, with a motor that doesn’t stop and a long, athletic frame and fearless mentality, Muscadin figures to stay in attack mode day in and day out during his first season with the Jayhawks.

While much of that time will likely be spent on the red squad, preparing KU’s starters and pushing them to the max on each possession, Muscadin figures to gain a ton from Year 1 no matter if he plays a lot or a little.

KU coach Bill Self said in late September that, because Muscadin was so raw when he arrived, he had been the Jayhawks’ most improved player throughout the team’s first 6-8 weeks on campus this season.

That type of development and progress is expected to continue into the 2020-21 season and it should put the man they call “G” in position to enjoy a breakout season in 2021-22.

Picture his progression a little like De Sousa's during his freshman season. When he arrived, De Sousa couldn't stay on the court for more than 2 minutes. But by March, he was a valuable part of KU's rotation.

Muscadin has that kind of potential and he also has more time to get acclimated than De Sousa did.

He won’t: Be the lone big man on the floor for the Jayhawks this season

If McCormack plays at the all-league/All-American level the coaches believe he can, and if Lightfoot is the same steady, never-back-down type of player he has been throughout his Kansas career, there's not going to be much time for Muscadin to get into games.

So it's safe to assume that, barring injuries or extreme foul trouble, the only time he will play is when one of those other two is on the floor with him.

Because of his athleticism and general skill set, Muscadin is well suited to play the 4 in the current college basketball climate. Having Lightfoot or McCormack out there with him, to do the dirty work down low, would help his chances of success greatly and allow the KU coaching staff to feel more comfortable with him out there. Particularly early in the season.

The only way I can see him on the floor by himself in the KU front court is if the Jayhawks encounter foul trouble or injury issues. Even then, it might be a reach.

He might: Be more skilled offensively than people realize

It doesn't take very long, while watching any of Muscadin's high school highlight reels, to see that his offensive game is fairly well-rounded.

At least, it was in high school.

Though still raw in so many areas, Muscadin is much more than just a run to the rim and dunk rebounds kind of player. That will likely be his primary role in Year 1 at Kansas, but his high school highlights show the foundation for so much more.

He has range out to the 3-point line and a good looking shot to boot — though it's unlikely that that will ever be a big part of his repertoire at KU. He can handle the ball in the open court and in traffic fairly well for a big man and he moves well without the ball.

All of those traits, particularly the last one, make him an attractive target for playmakers, of which Kansas has plenty.

Because he won't have the same physical advantages in college that he did in high school, Muscadin's freshman-year highlights won't look much like those on his high school highlight films. But he'll sprinkle enough in to show Kansas fans his tremendous potential, and he'll likely do all of it with a smile.