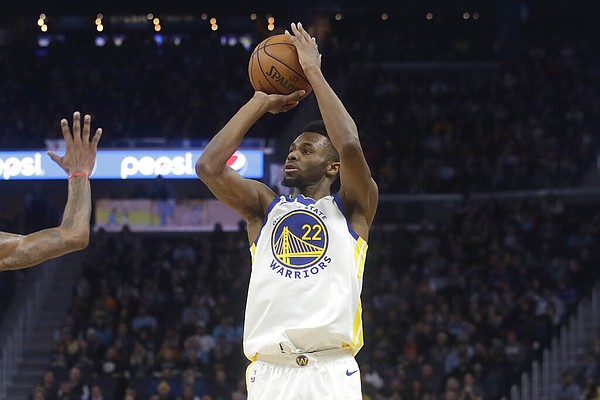 After being traded by Cleveland following the 2014 NBA draft, former Jayhawk and No. 1 overall pick Andrew Wiggins spent six seasons in Minnesota, where he racked up scoring numbers and a monster contract but did not do much in the way of winning.

But moving forward, he'll be looking to change that with a new team — Golden State — and some superstars by his side.

Just once during Wiggins’ time in Minnesota did the franchise win more than 40 games, despite having back-to-back Rookie of the Year winners in Wiggins (2014-15) and Karl-Anthony Towns (2015-16).

The Wolves averaged 32 wins per season in Wiggins’ first five seasons with the team and had just 15 wins with him this season before he was traded to Golden State.

When the 2019-20 regular season was put on hold because of the COVID-19 pandemic, Wiggins averaged 22 points, five rebounds and four assists per game for the season. He started all 54 games he played — 42 with Minnesota and his first 12 with Golden State.

His addition to the Warriors’ roster came at a time when GSW superstars Steph Curry and Klay Thompson were injured. But former KU point guard Aaron Miles, who is on the Warriors’ coaching staff, said the organization was excited about seeing what that trio could do together.

“I think he’s a perfect fit for what we do,” Miles said during a recent KUsports.com podcast series. “A perfect second or third option on the team that could eventually possibly be the No. 1 option in a couple years when it’s his turn. We only had him for a short amount of time, but Steph had just got back healthy so we were going to get to see what those two would look like.”

Wiggins’ 2019-20 numbers were slightly higher than his career averages, and overall he has been consistent in the areas of field goal percentage, 3-point percentage, scoring, rebounding and assists throughout his time in the NBA.

He holds career averages of 19.7 points, 4.4 rebounds and 2.3 assists per game, but he exceeded those marks during the 2019-20 season, both with Minnesota and Golden State.

“I think he’s going to be great with us,” Miles said. “Everybody knows he’s a great person: very skilled, highly talented. I’m excited for him.”