'Hawks in the NBA: Morris twins ready to heat up Los Angeles 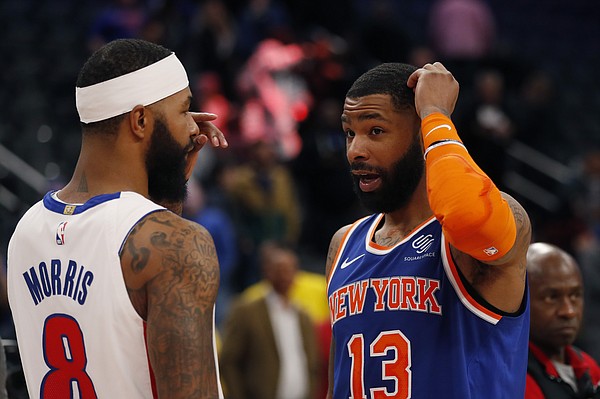 Markieff Morris, formerly with Detroit, talks with his brother, Marcus Morris Sr., who was then with the New York Knicks, after an NBA basketball game on Wednesday, Nov. 6, 2019, in Detroit. The Morris twins have since moved on to play for the NBA's two Los Angeles franchises. (AP Photo/Carlos Osorio) by Matt Tait

League officials recently announced the approval of the NBA’s plan to restart play in July, leaving 22 teams still alive in the 2020 title chase. While we wait for the season to resume, it seemed like a good idea to spend some of this idle time looking back at the season that was for the former Kansas Jayhawks in the NBA.

The Morris twins have spent more time playing together in their lives than apart.

Throughout their youth on middle school teams, in rec leagues and on the AAU circuit — along with three seasons at Kansas and a couple in the NBA as well — KU fans’ favorite twins have been on the same side for a lot of games.

These days, however, the two NBA vets find themselves in the most unusual of positions — playing in the same building but on different teams.

That became the Morris twins’ reality midseason when they were both traded just before the season was put on hold.

Marcus went first, from New York to the Clippers, and a couple of weeks later, Markieff was picked up by the Los Angeles Lakers after being waived by Detroit. Talk about good fortune — from out of the playoffs on a couple of 20-win teams to the top of the Western Conference.

Now, the two forwards playing in their ninth NBA seasons appear to be on a collision course toward meeting in the Western Conference finals when the season picks back up.

A lot has to happen between now and then for that to happen. Both have to win a couple of series against tough West opponents. And, more than anything, the NBA experiment of playing out the season in Orlando has to go off without any COVID-related setbacks.

Assuming it does, the Clippers and Lakers enter the restart with the best two records in the West and the potential for one heck of a seven-game series.

Forget LeBron James, Anthony Davis, Paul George and Kawhi Leonard. In the eyes of KU fans, it’s the matchup of Morris twins that will grab the most attention.

Although the two continue to be slightly different players, who deliver for their teams in different ways, there’s little doubting that they would be matched up with one another at various points throughout that would-be series.

From the trash talk among siblings to the intimate knowledge of each others’ games and best moves, the matchup could play a big role in who wins and who loses each game.

Asked recently in a Bleacher Report video about that potential matchup, the twins, to no one’s surprise, had a little fun with their answers.

Who wins a Game 7 between the Lakers and Clippers, the interviewer asked.

Marcus quickly gathered himself and conceded that the series would go seven games before adding that the Clippers would win Game 7 in a “blow out.”

Markieff wasn’t willing to let his brother have the last word.

“Let me be realistic with mine, too,” he said. “Lakers in four.”

It was clear in the video that the two were enjoying the banter. And you couldn’t help but wonder how many times conversations like these played out during their childhood, even though they spent so much time battling for the same team.

As for their current stats, Marcus quickly jumped into the Clippers’ starting lineup and is averaging 9.5 points and 4 rebounds per game in 28.3 minutes of action.

He said in February, when he was back at Allen Fieldhouse for his jersey retirement ceremony, that he was hoping to go out there and become the team’s missing piece toward its run to a championship.

For the season, Marcus is averaging 17.4 points and 5.1 rebounds in 31.4 minutes per game. So it may only be a matter of time before his numbers in L.A. jump a little.

Markieff, meanwhile, is coming off of the bench for the Lakers, averaging 4.8 points and 3.3 rebounds in 14.8 minutes per game in his eight games with the team.

His season averages are slightly higher at 10.1 points and 3.8 rebounds in 21.3 minutes per game.

For their careers, the twins are averaging strikingly similar numbers, which fits their twin persona perfectly.

After Marcus Morris says Clippers in 7 over the Lakers, Markieff Morris responds and says Lakers in 4 over the Clippers 😈🔥🔥 pic.twitter.com/b6rPxnhYRA

None by The Laker Files

No way Markieff's numbers will go up at the Lakers. Too many ball hog "superstars" on that team. No way they will share the glory with Morris.