KU appears to be planning a 1990s throwback uniform game vs. Oklahoma this weekend 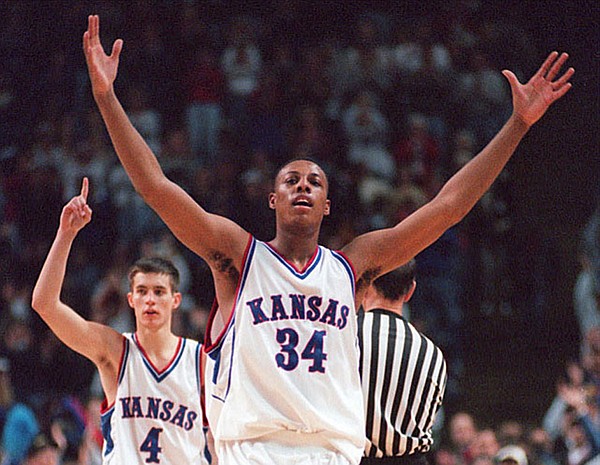 Former Jayhawks Paul Pierce and Ryan Robertson decked out in the home white of the 1990s. (File photo) by Matt Tait

They're officially calling the movement "90s Retro," which makes this Class of 2000 college graduate, who capped off his high school career in 1996, feel more than a little old.

Each year, the KU basketball program picks a couple of games to wear different throwback uniforms. Sometimes the new duds are tied to an event like Black History Month. Other times, the alternate attire is the work of Adidas, which is using KU to roll out a new style, new look or new technology.

And other times, the powers that be within the program just want to get in on a good, old-fashioned throwback festival.

That appears to be what’s happening on Saturday.

The video clip associated with the Tweet showed highlights of former KU greats Jacque Vaughn, Raef LaFrentz, Paul Pierce and others, wearing the classic white Kansas uniforms that prominently featured both crimson and blue as part of the look.

Although Nike was KU’s apparel provider throughout the 1990s — KU agreed to switch to Adidas in 2005 — there’s no doubt that Adidas will be able to recreate the look in its image, complete with everything but the Swoosh.

Third-ranked Kansas, which sits one game behind unbeaten Baylor in the Big 12 standings, will take on Oklahoma at 11 a.m. Saturday at Allen Fieldhouse.

The 90’s are makin’ a comeback... pic.twitter.com/euWmXr55EY

KU basketball should never wear anything other than the circus font. Make this permanent!

If you're going to wear a throwback uniform against Oklahoma, wear a 1988 throwback - you know, to rub it in the Sooners' faces that we beat them for the 1988 national title. #Trolling #IHateOklahoma

I live in Oklahoma,so I use the #IHateOklahoma tag a ton!

I know this is pedantic, but KU didn't actually start wearing Nike until the mid-90s (I want to say the 95-96 season?)). For the first half of the decade, Kansas wore Champion. The very brief glimpses of the throwbacks look more similar to the Champion uniforms than the Nike ones.

Upon investigation (that no one asked for) KU didn't start wearing Nike until the 1997-98 season.

Man, I miss these jerseys! Wish we'd get them back on a permanent basis! Although, any jersey they wear is cool to me, hah! I like the JAYHAWKS in cursive on the front too. But growing up with the late 80's/90's jerseys, IMO they are the best college basketball jerseys in the country. RCJHGKU!!!!