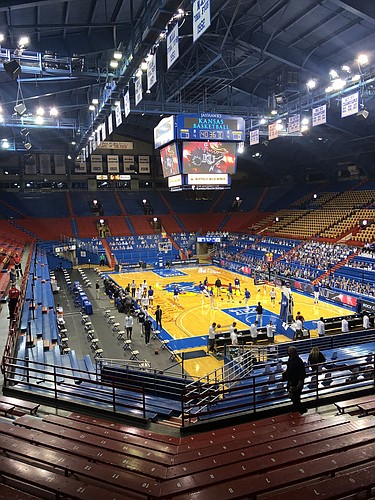 Family members of the players and coaches were the only fans in the Allen Fieldhouse stands during Thursday’s home opener at Allen Fieldhouse between the seventh-ranked Kansas men’s basketball team and Washburn, but that plan will be short-lived.

Just before tipoff Thursday’s game, Kansas Athletics announced that it will allow fans on a limited basis at all home athletic events from Dec. 7-14.

KU Athletic Director Jeff Long said the decision, which will be made on a weekly basis throughout the month, came after deliberation with KU’s Pandemic Medical Advisory Team.

In an email announcing the plan, Long praised campus leadership, led by KU Chancellor Douglas Girod, for its guidance throughout the process and noted that KU has not had any known transmission of COVID-19 at the KU competitions that have had fans in attendance.

Long added: “And we are confident in our plans for games inside Allen Fieldhouse.”

KU officials announced earlier this fall that they anticipated a capacity of around 1,500 fans for Kansas basketball games this season due to social distancing requirements.

Smart move. Infections have decreased. No one is dying. The economy is roaring. And the election is rigged.

These are some seriously stupid people.