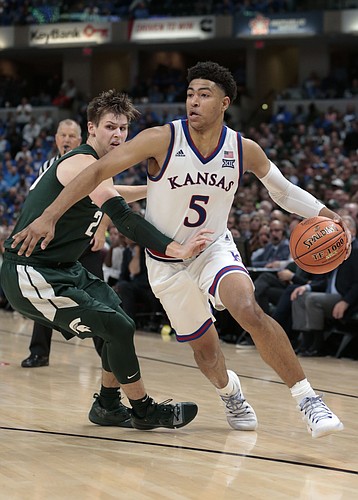 Former Kansas guard Lagerald Vick was in Charlotte, N.C., on Wednesday, participating in a pre-draft workout with the NBA’s Charlotte Hornets. And in Part I of this series we took a look at the scout’s breakdown of All-American junior Dedric Lawson.

Today, we move on to one of the more polarizing players to come through KU in a while, freshman guard Quentin Grimes.

At the time Grimes committed to Kansas, he was a projected lottery pick and a Top 10 talent. Had he been able to jump directly to the NBA out of high school — a move that may soon be an option again if the NBA elects to get rid of the one-and-done rule — Grimes’ life as he knows it may be very different than it is today.

Instead, the 6-foot-5 guard with NBA size and a variety of skills finds himself in the position of having to prove that he belongs.

Although he was not exactly sure when or whether his franchise would take him, the scout believes Grimes will be drafted in June if he stays in the draft and added that he “could see a team that has patience take him in a heartbeat.”

• Quick trigger with a shot that looks like a laser.

• Unselfish. Make the right plays and makes good passes, with good handles for someone his size. Has the ability to become a reliable secondary ball handler.

• Grimes has really good size and feet and contains other guards at his size/position really well.

Now let’s move to the areas that have led some to wonder whether Grimes will get drafted.

• Has shown struggles to make plays for himself inside the arc.

• When he isn’t making shots from distance, how does he affect the game?

• Because of his focus on being ready to slide and move his feet to defend, he can fail to close out to shooters with his hands up.

Grimes is still young and it’s clear that his game has a lot of potential and room for growth. KU coach Bill Self, at the team’s season-ending banquet last month, said he believed Grimes had his best basketball ahead of him and encouraged the power guard from The Woodlands, Texas, to go prove that he belongs in the NBA.

The scout does not believe that’s a reach.

“His rotation, lift and arch all check out,” he said.

Now, it’s up to Grimes to show NBA personnel that he can do more than knock down jumpers with good form.

We should never get to worked up over one and done, and soon it will be over anyway. What we should focus on is how the coach's deal with it.

Actually our current situation derives in great part from the recruiting for the year 2017. Billy Preston, Silvio DeSousa and Marcus Garrett.

That is only 33% percent of current activity. If we get Silvio, then we can call it a success, but if we don't that means that class ended up being very weak in terms of minutes played, over all. Yes, I know Silvio played a lot before suspension, but you have to see it from the standpoint that his being on the team and unable to play used up a scholarship that could have gone to someone who would be contributing next year.

Obviously it looked great when it happened, but it is a big part of where we are now.

Not sure we would've gone to the FF without Silvio.

If you weren't buying into the NBA looking at potential over skill, then this scout should change that. Seems like a good kid but I'm not sure he should even be starting for KU let alone being drafted.

Agreed. If I were an NBA team I would talking Grimes up to the competition while running the other direction.

Seems to me this scout's conclusion is...its better to look like an NBA player than be an NBA player. And, I wonder if the scout saw all the KU games as we did?

In other words, it's the G league for Q.

He won't even start in the G-league unless he really improves. This one is just a bad decision. But, he's an adult and he's entitled to make mistakes.

Matt: I am at a loss as to not understand why the De Sousa eligibility protest is in the air and no decision is made. Maybe you have an answer that makes sense.

Look at how the NCAA has dealt with any other recent recruit, Pius, who they conducted an inquiry on. Billy Preston sat out forever whilst they moved at a snails pace. I guess those investigators aren't paid overtime, plus they must be taking 2-3 hour lunches.

...but does he look like Fabio? Does he have a hot girlfriend?

Informative article, Matt. I invariably learn something new from your pieces. Thanks for the effort you put into your work.

Q showed he didn't have the desire nor the quickness to compete at the college level, and things are going to drastically change if he leaves? Best move for him is to come back to KU with a completely different mindset.

As already pointed out, Q was not a good finisher, with or without contact. He missed tons of driving layups, some weren't even close to going in even when uncontested.
Did this scout ever see him play? He was not dependable from the free throw line nor from long distance. I`m not surprised he came out, but will be if he is drafted regardless of "potential".

Blake, I had the same question - did this scout literally ever see Quentin play college ball? That was a really poor breakdown of his game.

It is entirely possible that if he comes back, then we don't get R.J. On the other hand, R J. could probably play in a 4 guard lineup, with Dok. But would we have the 3pt shooting from the other guards to really make it work.

Biggest thing last year was that Grimes needs the ball, and we have a point guard, who also has the ball. Instead of learning from that he sort of fought it the whole season. If he comes back, he has to really buy in.

I hope he comes back for another year.

I guess what the "scout" says is possible. Kelly Oubre didn't do much for KU either. He did not even start, but he has turned into a pretty decent NBA player for the Wizards and now the Suns. He is a free agent this year and there is speculation he might get a deal worth $15-20 million a season.
https://www.azcentral.com/story/sports/nba/suns/2019/04/25/suns-love-kelly-oubre-jr-but-would-they-match-80-million-deal/3571277002/

Brad, your memory is failing you. Kelly started 27 of 36 games at KU, and all of those non-starts were at the beginning of the year. He started 17 of 18 conference games, and my memory is failing me on whether the one non-starting game was a twisted ankle or disciplinary.

Probably Senior night if I had to guess

When Kelly O played for KU, with the limited minutes, he showed that he had a good feel for the game, know where to position himself, and a good shooting guard. What about Q this year?

Dave - While it seemed that Billy's situation was taking forever to resolve, we learned at that time it had a lot to do with KUs investigation. We've since learned that even that probably had more to do with Momma Prestons lies to cover up where the car came from. I'm not ready or trying to defend the NCAA in general but the vast majority of the blame in the BP situation is home grown.

Quentin Grimes will withdraw his name from the NBA draft and return to Kansas for his sophomore season, Evan Daniels of 247Sports first reported. He averaged 8.4 points and started in all 36 games for the Jayhawks as a freshman.