KU coach Bill Self addresses the end of the streak, the NBA, Quentin Grimes and much more on latest Jeff Goodman podcast 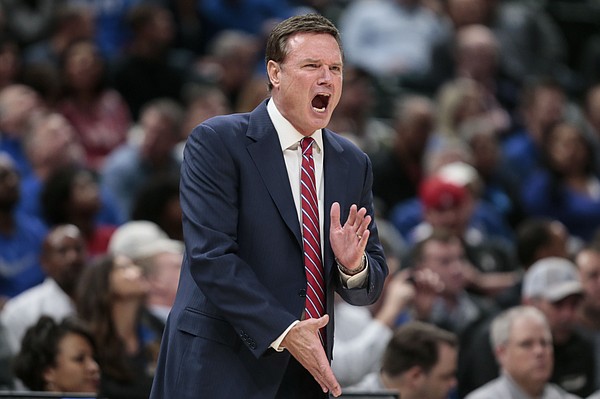 Kansas coach Bill Self yells during the first half of the team's NCAA college basketball game against Michigan State at the Champions Classic on Tuesday, Nov. 6, 2018, in Indianapolis. Kansas won, 92-87.

The best part of the college basketball season is still ahead and nobody’s worrying much about what happens after the season.

But on the latest episode of the Good N’ Plenty w/ Jeff Goodman podcast, KU coach Bill Self addressed a couple of things of note beyond this season while also talking about the end of the program’s 14-year Big 12 title streak, his favorite double cheeseburgers and the Jayhawks’ goals entering the postseason after Saturday’s regular season finale against Baylor.

“I don’t know why we have to alter what our ultimate goal is,” Self told Goodman, the former ESPN reporter who now works for WatchStadium.com. “But I think we have to understand that, in order to achieve it, it’s going to be a much harder path and there’s not the same margin for error that maybe we’ve had in the past.”

That margin for error factor has been something the KU coach has addressed a lot lately, with his team somewhat depleted and looking much different than it did when the season began.

Self has said throughout the past couple of days that the fact that the Jayhawks still figure to be a Top 4 or 5 seed, perhaps higher if they can get hot, will give KU a chance in the NCAA Tournament, but the road will be different than the one from the 1- or 2-seed slot that they’ve been used to in recent years.

One of the most interesting topics that Goodman got into was the ever-present rumors of Self having a future in the NBA, particularly with the San Antonio Spurs, where good friend and former KU staff member R.C. Buford runs the show.

“That’s not true at all,” said Self of the chatter that he’s in line to someday be the next coach of the San Antonio Spurs. “That’s a long ways from being accurate. R.C. and I have never once talked about that, and anybody who brings that up or says that obviously is not in the know at all.”

In order for such a marriage to even become possible, longtime Spurs coach Gregg Popovich would have to move on and you can count Self as one on a long list of people hoping that day does not come any time soon.

“I kind of hope Pop can coach forever,” Self told Goodman. “I think he’s so good for our sport. I hope he continues to coach for as long as he possibly can.”

As for whether he’s thought much about making the jump to the NBA or entertained the idea of what that challenge would be like, Self said, “Anybody that says they’ve never thought about it would probably be not being truthful. But as far as any serious thought, no, I haven’t given it any serious thought. I honestly feel you’ve got to know your wheelhouse or your strengths, and I feel, personally, that (Kansas is) not (only) one of the best jobs in college, it’s one of the best basketball jobs period. And certainly I’ve enjoyed every moment being here at KU.”

Another topic covered on Goodman’s latest podcast involved a current KU player who likely will someday be in the NBA even if his freshman season at Kansas has not gone quite the way many people expected.

When asked about the prospects of freshman guard Quentin Grimes, Self spoke with pride about all Grimes has had to endure during his first season as a Jayhawk.

“Well, you know, I still think he’s a pro,” Self said. “And if he comes out, I think he’ll impress and certainly have an opportunity to be a first-round pick. … It hasn’t all been easy for him, but I’m not sure that’s been all been bad either. Even though we want it to be as easy, to an extent, as we can, but going through some crap might be better for your long-term future, too. And he’s had to fight through some stuff and I’m proud of him on how he has. It’s been a little bit more challenging. And there’s some other reasons for that. It’s not all on him. But he can still do everything that he dreamed of doing. It’s just been a little bit harder and he’s got to grind a little harder but I know he can do it.”

For more on those topics and many more, hop over to iTunes to listen to the full 43-minute podcast with Self and someone who has been covering him for a long time.