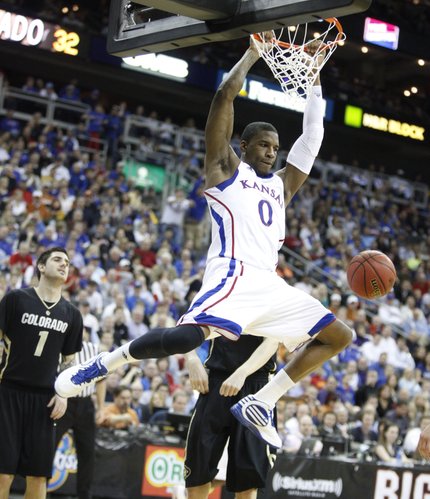 Kansas forward Thomas Robinson dunks on Colorado during the first half on Friday, March 11, 2011 at the Sprint Center. by Nick Krug

Former lottery pick Thomas Robinson is eyeing a return to the NBA this summer.

Robinson, the No. 5 overall pick in the 2012 NBA draft, has agreed to join the San Antonio Spurs’ Summer League roster in Las Vegas, according to Twitter account @HoopsRumors.

The 28-year-old former KU All-American who led the Jayhawks to the 2012 national title game in New Orleans has played with Sacramento, Houston, Portland, Philadelphia, Brooklyn and the Los Angeles Lakers during his professional career.

He last played in the NBA during the 2016-17 season with the Lakers. After that he spent time with the Maine Red Claws of the NBA’s G League and also played overseas in the EuroLeague and China.

While his motor, high effort and tenacious nature on the glass allowed him to play several seasons in the NBA, Robinson, at 6-foot-9, has been viewed as a bit of a tweener, position-wise, by NBA standards.

From the beginning, he also had to figure out how to function as more of a role player instead of the automatic-double-double enforcer he was at KU during his All-American season back in 2011-12.

“Thomas can shoot,” KU coach Bill Self said a few years back after Robinson's rocky rookie season in Sacramento. “Thomas for me was a volume shooter, though. Since he had the green light his last year, he knew if he missed it didn’t matter because he was supposed to keep shooting. In the NBA, it’s a little bit different when you are not the first option,” Self added. “So he has to be able to make one out of two wherever he shoots from.”

His best stint as a pro came during the 2014-15 season when he averaged 8.8 points and 7.7 rebounds per game during a 22-game stretch with Philadelphia that saw him averaged a career-best 18.5 minutes per game.

As mentioned his game is very difficult in the NBA, he's just a hair short for those 4 or 5 positions, but without an outside shot it gets difficult to continue with the NBA.

I hope he does well in the G-League, Good Luck TRob.

He's kind of a tweener by the traditional NBA definition, due to size, but the league has gotten away from traditional size standards. But it doesn't help him--if you're a 6'9" PF or center now, that's fine, but you're expected to have handles, pass and shoot like a traditional 2 or 3 man.

No one can indict his effort and work ethic. I so hope he gets back to the show.

Would Dennis Rodman still have a place in the NBA today?

Danny, you're reading my mind. When he got drafted, I expected him to be the next Rodman, but with a better shot and without Rodman's baggage.

His motor should keep him playing professionally. The NBA is harder for bigs who aren't particularly versatile at this point however.

I hope he can keep playing in until he wants to stop playing though. Father time is undefeated.