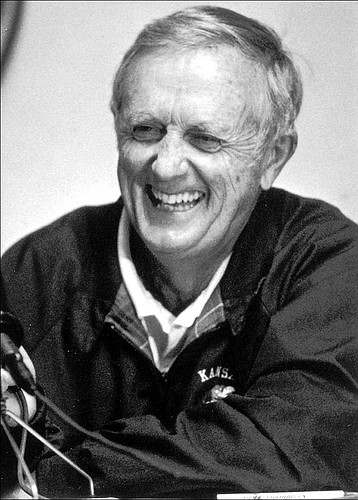 "Statistics are for the record book but friendships are for life."

As the news of the passing of Max Falkenstien sinks in, hundreds of Falkenstien fans — whether they knew him or not — have taken to Twitter to celebrate the longtime KU broadcaster who was a friend to everyone and an ambassador for all things KU.

For many, the stories they tell are personal in nature, that one lasting memory of their time with Falkenstien or that one moment that made them laugh or cry or think the most during years of interactions with him.

For others, the stories are of a time when they grew up listening to “Bob and Max” on the radio or chose the radio broadcast over the television announcers because they had to have their KU games feel just right and Falkenstien and longtime broadcast partner Bob Davis made that happen better than anyone alive.

Regardless of the connection or the reason for their memories, the outpouring of love and respect and admiration for Falkenstien’s life and career showed in no uncertain terms just what kind of an impact he made on the entire KU fan base, those he knew well and those he met in passing.

To include all of the memories and reactions to his passing here would keep one busy for the rest of the week and you still might not get to all of them.

So, in the spirit of honoring him beyond the words about his passing, here is but a small sample of the kind words others offered about their friend Max Falkenstien in the hours after his passing.

Falkenstien died Monday afternoon at age 95 after living a life that could only be dreamt up in the pages of a Hollywood script and will not soon be forgotten.

RIP to the beloved Voice of the Jayhawks, Max Falkenstein. Going to miss talking basketball and life with you. Thank you for all of the kind words and stories over the years. The true definition of a Jayhawk. pic.twitter.com/GruEFuu5hp

Roy Williams once asked Max Falkenstien if there was a place the then 70-year old broadcaster had never been to, but would like to go. Max told Roy: The Palestra. The next season Kansas played Penn in The Palestra. Like most of us, Roy loved Max.

None by Dean Buchan

Just learned of the passing of @KUHoops for Rock Chalk Jayhawk voice for 60 yrs MAX FALKENSTEIN who was a MT Rushmore in my latest book as a Team broadcaster / Max was Mr Jayhawk & so classy . Loved my times talking with him in my visits. May Max RIP !@CoachBillSelf

Max Falkenstien, longtime “Voice of the Jayhawks,” passed away yesterday. When I started at Kansas, Max was one of the first to take me under his wing. He was an icon in the community and a truly nice man who treated everyone with respect. He always had a smile on his face.

Very sad to hear about the passing of Max Falkenstien. Grew up listening to THE voice of the Jayhawks. Always appreciated how much he respected the coaches & players during his broadcasts. #Legend

Such sad news to hear the passing of Max Falkenstien!! Was such a great man and a joy to be around. #KULegend he will be missed!! #RIPMAX 🙏🏽

None by Jeff Boschee 🦁

There are many great #KUBball players. But ask any of them: there will only ever be one Max Falkenstein. A lot of great things can and should be said about him. But what I'll remember most was that he was such a… https://t.co/tmuVli1gCV

None by Matt Kleinmann

RIP to a legend in broadcasting, and a Kansas icon, the great Max Falkenstein. 95 impactful years of kindness, class and dignity. What an amazing pro. Rest In Peace, Max. pic.twitter.com/hfxJtiHEwm

With a heavy heart, never will I forget all the positive wisdom and get memories we had together! My eyes always lit up when I saw you!! #ForeverALegend❤️❤️❤️ #RIPMax😢 #KansasUniversityFinest💯 @kuhoops @kuathletics pic.twitter.com/3VKWSmHbx8

Max was one of the very first to encourage me to chase my dreams in sportscasting - a pep talk he gave me when I was 16. He offered constant support ever since, including coming by the booth on my first day sitting in his chair. More than a mentor, he was a dear friend. RIP VOTJ pic.twitter.com/PH2yIhK7Z1

Max was truly one of the most incredible story-tellers of several generations & his longevity is even more remarkable. 60 years as one school’s “Voice” will never be done again. He’s as synonymous with KU sports as anyone. Ambassador, Legend, Icon. Jayhawk Nation lost a lot today

Kansas Athletics lost one of its greatest ambassadors today with the passing of Max Falkenstein. He did so much for so many. Thanks for enriching my life!! Rock Chalk!!#legend #RIP

Every person should strive to be remembered as Max Falkenstein is being remembered. During my days at KU in the 70’s he truly cared about every individual he came in contact with. Made you feel like you were on top of the world after a few minutes with him. Rest in peace, Max. https://t.co/7BOZycIBKN

None by Mike Swanson

Very sorry to hear of the passing of the “Voice of the Jayhawks” Max Falkenstien at the age of 95. What an amazing career. What a lovable man and perfect ambassador of KU. RIP Max. pic.twitter.com/zvEC6qNxFw

None by Jason Lamb

Rest In Peace Max Falkenstien. One of the reasons I wanted to become a sports announcer as a kid. Was a dream come true when I got to work my first game with him and the great Bob Davis. Both treated me so well, even though I was just a young punk. Respect. 🙏

None by Nate Bukaty

Hopefully Chuck Woodling, Bob Hentzen, Pete Goering, Joe McGuff, Bill Mayer, Steve Schoenfeld and so many other sports writers were sent to welcome Max at the Pearly Gates. Max had many pals in the print media as well as broadcast, some who preceded Max in death. RIP Max.

None by Gary Bedore

“Voice of the Jayhawks, Max Falkenstien, passes away at 95”
Sadly we have lost a legend. Our thoughts and prayers go out to his family. I was honored to meet him before he passed. 🙏🏼 #ForeveraJayhawk

Rest In Peace, Max Falkenstien ... one of the nicest men I’ve ever known. I accumulated so many great “Max stories” (mostly from the road) during my years of covering KU. I’m so fortunate to have spent so much time around him. What a treasure he was to us all ...

Max you where the voice of my Jayhawk youth. You gave us so many great memories. You always knew the right thing to say at the exact perfect moment. ROCK CHALK MAX FALEKNSTIEN HEAVEN GOT A GREAT JAYHAWK TODAY. https://t.co/bZXTeo8Hpy

None by Ardent Media

So sorry to hear of the passing of Max Falkenstein. Max was a man of class. He always had a kind word, and was a tremendous mentor to thousands who followed athletics at University of Kansas. Along with my daughter Chase, he’s one of my two favorite Jayhawks ever. RIP Max. pic.twitter.com/i9qYO1F5aX

None by Al Wallace

Sad to hear about the passing of a Kansas Jayhawk legend- Max Falkenstein who spent 60 years calling KU games on radio. pic.twitter.com/HoiwDVSypC

None by Doug Vance

Wow. Max Falkenstein's death brings back so many memories of KU. So many awesome memories. Damn. First time I stepped on campus it was K-State vs Kansas on Thursday night. I wrote a column joking about the football rivalry.

None by Jason Whitlock

None by Dick Weiss

R.I.P. Max Falkenstein - a true broadcaster - he was a friend to everyone he met #Max - here he is in November 2016 with former @IchabodMBB Bob Chipman during his last time coaching in Allen Fieldhpuse pic.twitter.com/ZZ6mzJ696P

So sad to hear the news my dear friend Max Falkenstein passed away today at the age of 95. Max was the Voice of the Jayhawks for 60 years - football and basketball - and one of the great broadcasters in college history. He was the living textbook of KU history. Such a good man.

None by Ken Davis

Like everyone else, I grew up listening to Max call KU football games. He had a voice and a way of calling a game that made me feel at home.

This makes me wish we said things like all of the sentiments above while people are still alive so they can hear it.

Thanks for the memories !