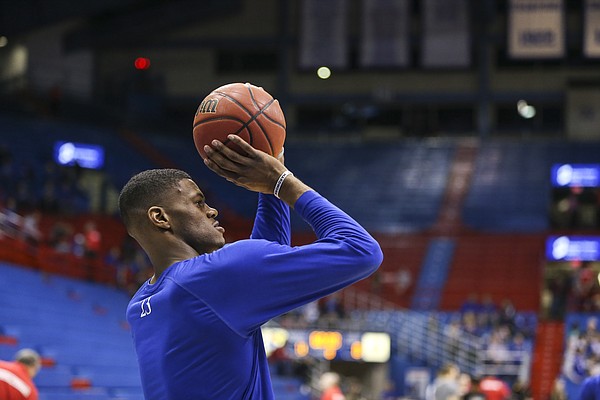 Kansas forward Billy Preston (23) puts up a shot during warmups prior to tipoff against Fort Hays State, Tuesday, Nov. 7, 2017 at Allen Fieldhouse. by Nick Krug

People from all walks of life, from Kansas fans to NBA executives, entered Thursday with mixed feelings about whether former Jayhawk Billy Preston would hear his name called during the 2018 NBA Draft in Brooklyn, N.Y.

When it was all said and done, after nearly five hours of drafting, two rounds and 60 picks, Preston still was without a team, a fitting end to a tough year that featured road block after road block to Preston starting his professional basketball career.

Consider all that Preston has endured during just the past 12 months:

• After committing to KU in November of 2016, Preston reported to campus in June of 2017 and quickly began working with the Jayhawks in summer workouts and camp scrimmages. But it was not until the team arrived in Italy for its four-game exhibition tour last August that Preston learned he was fully cleared by the NCAA.

• While in Italy, a minor knee injury kept Preston from participating in all four games and his unofficial debut with the Jayhawks was wildly viewed as hot and cold.

• After impressive showings at Late Night and against Missouri in the charity game for hurricane relief at Sprint Center — the power forward scored 12 points and snagged 5 rebounds in 15 minutes against the Tigers — Preston wowed the crowd with a high-flying, fast-break dunk in an exhibition game against Pitt State but also suffered a head injury during that game that limited his minutes.

• Preston missed KU's season opener because of a team suspension, for one game, stemming from his missing curfew and class in the 24 hours leading up to the game.

• Preston was expected to return to action for KU's Champions Classic game against Kentucky in Chicago, but that was the day news broke of the single-vehicle car accident that Preston was involved in that ultimately led to him not playing a single official minute at Kansas.

• Throughout the next several weeks, with KU coach Bill Self providing regular updates on Preston's status, the forward was held out of action as a precautionary measure as the university and NCAA looked into getting a clearer financial picture of how and where Preston got the car he was driving during the accident.

• As the investigation dragged on, stalled significantly because of winter break and the holidays, Preston's patience grew thin and, on Jan. 20, 2018, he and his family decided he would leave KU to pursue professional opportunities overseas while preparing for the NBA Draft at the same time.

• Preston signed with a team in Bosnia but played very few minutes during three games over a six-week period. Preston played all of 47 minutes and scored 21 points on 21 field goal attempts and totaled 12 rebounds in his brief time playing for Igokea of the Adriatic League.

• After returning to the United States, Preston received an invitation for the predraft combine in Chicago in mid-May and while he did attend the showcase, his agent pulled him out of the scrimmages at the last minute, further clouding the situation surrounding Preston as a viable draft pick.

So now the former five-star, can’t-miss prospect ranked in the Top 10 by Rivals.com out of high school must start his career the hard way, catching on with a team via the free agency route and impressing enough to inspire one of them to let him stick around.

“There’s still opportunity,” KU coach Bill Self said following Thursday’s draft. “But the bottom line is you’re going to have to show some toughness and do it the harder way.”

Finding success on the undrafted free agent path is not unheard of, of course. Former Jayhawk Wayne Selden, just a couple of years ago, embarked on this very same type of journey and now, after his first two years away from college basketball, has played in 49 NBA games and averaged 19 minutes per outing with 14 starts. There are countless other examples of this route working out. And it remains to be seen whether Preston join the list of success stories.

But there’s no denying that the issues that plagued him throughout his one season as a Jayhawk — from minor injuries and suspensions to the lingering eligibility issue that led to him leaving the program early to pursue his options in Europe just to be able to play ball again — had a major impact on his Thursday night fate.

Had none of those issues popped up — some of them self-inflicted and others beyond his control — there’s no question that Preston, like former Jayhawks Devonte’ Graham and Svi Mykhailiuk, would be in some NBA city today waiting to be introduced by his new team with a smile on his face and a little more money in his bank account.

“Oh God, yeah,” Self said when asked if Preston would have been drafted had it not been for all of the off-the-court issues during the past nine months. “Billy’s first round talent and we’ve had more than one team tell us that. But they haven’t seen him. (That) hurt him. There’s no question about that, as far as the draft goes. But what happens in 2018 isn’t going to define whether you’re a pro in 2026 and the objective is to have a career not a paycheck.”

Because of his past pedigree, 6-foot-10, 240-pound frame and athleticism and skill set, Preston will have plenty of opportunities. Several undrafted players agreed to free agent deals as early as Thursday night and Preston’s time is coming, with a deal and a spot on a summer league squad pretty much inevitable. It’s what he does with those opportunities that matter most now.

And the never-was Jayhawk who stayed engaged with the program during his time in Lawrence and continues to be embraced by his former KU teammates and coaches will have to be locked in and clear of distractions from this point on if he hopes to end up where he always has believed he would.

“Intangibles will be more important than ever concerning these guys,” Self said. “They’re going to have to be hungrier than they ever have been.”

Whoever enticed him to get that car should be put in jail. What a huge mistake. Everyone lost on that deal. Such a shame.

Billy and his mother knew the rules set forth by the NCAA to maintain amateur status. His never playing in Allen Fieldhouse was self inflicted. As stated before the beginning of last season, I thought he would have been a fan favorite based on his outgoing and fun loving personality. As Self indicated, it will be a tough road to get to the NBA, but if he has the persistence and talent many have seen, then hopefully things will work out in the end for Preston and his family.

Thank you Mom!!! Car probably came with the Adidas money the FBI tapes says she received. And, she was moving on with a lawyer while Coach thought the NCAA was still processing. I'm looking forward to his performances in Las Vegas next month. Just maybe some pro team will find a seat for him behind their game bench this season.

I hope Preston fires his agent who convinced him to pull out of the five-on-five scrimmage at the Combine and therefore kept NBA people from seeing what he can do. I've read several places that the NBA people said they love his talent but have no idea what he can do against other than high school competition. Sad. I wish him luck. He's due.

Inspite of all of his problems and major whiff in performance, Billy was and is a Jayhawk, as shown by the players' and Coach's acceptance of him. "Never was" is way over the top.

Billy wasn't drafted for the same reason we have a 1&done rule. Billionaire are tired of wasting money on unproven players. The kid that didn't go to WKU ironically did better not playing at all than Billy did Reinforcing the suspicion that he didn't have the non-physical development necessary to make it as a professional.

Has anyone in recent memory taken the tailspin that BP has found himself in? As a projected lottery pick to essentially not playing except for minor overseas minutes for his entire year before the draft, not even getting a sniff and now must fight to get to the G League?

I mean, Michael Porter JR had a similar resume this year yet he managed to get drafted 14th.

I never got to see one game of him in action. Was he legit?

Definitely. Good athlete, not a freak, but a real good athlete. Good shooter, ballhandler, good hands, agile, broad shoulders. Could do a little bit of everything.