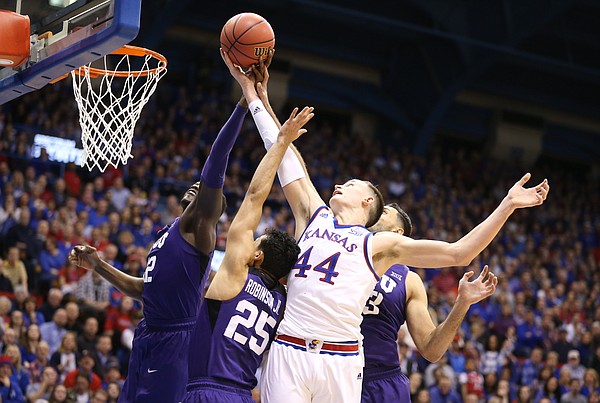 Kansas forward Mitch Lightfoot (44) fights for a ball with several TCU players during the first half on Tuesday, Feb. 6, 2018 at Allen Fieldhouse. by Nick Krug

The Horned Frogs entered the game averaging 86 points per game and operating as one of the most efficient offensive teams in the Big 12 Conference. Kansas held them to 64 points — 28 in the second half — on 40 percent shooting. It might not always have been pretty, but it was a damn good defensive effort by the home team, one that featured a ton effort, energy and desire.

Udoka Azubuike delivered the kind of double-double he should have most nights out and Mitch Lightfoot was rock solid in his first start. If KU gets more nights like that from its two big men, this team could turn a corner in a hurry. Azubuike was a force on both ends, dunking over people at will on offense and skying high for defensive boards. He even blocked a pair of shots and grabbed three offensive rebounds. The best part? They committed just four fouls between them and made a monster impact in just 47 combined minutes.

We covered this a bit in the offensive grade, but this one gets the plus because of the big night delivered by Graham — when KU absolutely had to have it — and the ultra-solid 20 points on 7-of-13 shooting from back-up guards Garrett and Lagerald Vick. Svi and Newman were not good offensively, but both played hard and found other ways to impact the game. Newman's five assists tied for the team high and Svi's 36 minutes and presence as a player the TCU defense absolutely had to respect and pay attention to opened things up inside for Azubuike.

I'm not sure you can get much more out of Garrett, who made all four shots he attempted and grabbed two rebounds and dished an assist in 15 minutes. And Vick, after being benched at the start of the game, still played 29 minutes and, at times, looked as aggressive as he has looked in weeks. TCU's a good team. This was a good win. Nobody in a Kansas uniform is apologizing for the way it came or looked. All that matters is how it reads on their record.

"the ultra-solid 20 points on 7-of-13 shooting from back-up guards Garrett and Lagerald Vick." while true Vick was 3-9 and Garrett was 4-4. 4-4 is "ultra-solid" but 3-9 dont see that. Worrisome that this is what an A- overall game looks like coming off an embarrassing loss at home. Just looking at the game from an entire standpoint felt more like a C or C+.