KU Kickoff 2018: The case for a 2-win Kansas football season 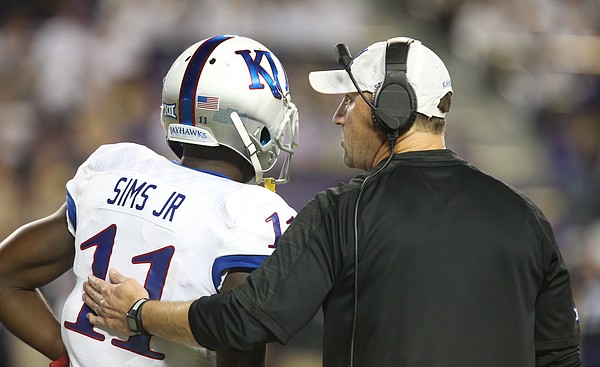 Earlier this week, Journal-World sports editor Tom Keegan officially made his win/loss prediction for the 2018 Kansas football team, picking the Jayhawks to finish David Beaty's fourth season with a 3-9 record. Clearly, that's not the only possibility for the Jayhawks, who, with a veteran group mixed with some new faces, could finish with more or certainly even fewer victories than the three Keegan's predicting. That's where the rest of us come in. In the days leading up to KU’s opener, we'll look at three more possible win totals for the 2018 Kansas football team, which opens the regular season at 6 p.m. Saturday night at home against Nicholls.

It sounds like a modest total, one that certainly should be attainable each and every year, and, for the most part, one that would represent a pretty disappointing finish for any college football program.

Would you believe that Kansas, during its 127-year history, has won two or fewer games in 28 of those seasons, including hitting two wins on the nose during 18 of those 28 rough years?

So, what does any of this have to do with the upcoming 2018 season? Nothing exactly. But a case certainly could be made for Kansas to finish David Beaty’s fourth season at 2-10, therein pushing that number of all-time two-win seasons to 19.

And, as history shows us, there are a ton of ways for the Jayhawks to get there.

In 1966, KU won two road, nonconference games. That’s not possible this year, with KU playing just one road, non-Big 12 game away from home, but a win in Week 2 against Central Michigan would go a long way toward reaching two wins and could propel Kansas past that mark.

In 1982, KU won one noncference game and one conference game — both at home — just as it did in 2016, Beaty’s second season in town, when the Jayhawks beat Rhode Island in the opener and later knocked off Texas in overtime. Given the fact that KU lost its nine Big 12 games by an average of 32 points last season, it’s hard to envision Kansas reaching two wins by way of the one nonconference and one Big 12 win strategy. Beaty has just one Big 12 win in his first three years and Kansas, overall, has just four Big 12 wins since the end of the Mangino era.

In 2002, Kansas won two nonconference games, one at home and one on the road. If not for that pesky, 46-game road losing streak, this would be the most likely path to two wins for the 2018 Jayhawks.

And in 2011, KU opened the season 2-0 with home wins over nonconference foes.

So there you have it. In KU’s five most recent two-win seasons, the Jayhawks have reached that mark in four different ways. And that still does not cover what I think is the most likely way for the Jayhawks to get to two victories this season.

That last one, from 2011, comes close, but KU does not have back-to-back home nonconference games this year, so even if the Jayhawks do defeat Nicholls and Rutgers at home, they won’t have followed the exact same path that was taken in 2011.

The easiest route to two wins certainly seems to be for Kansas to win those two games. After that, who could fault the team for losing a road nonconference game and all of its Big 12 matchups?

After all, the Jayhawks have done exactly that in four of the past seven seasons.

• Why the Jayhawks could win only 1 game — or none

• The case for a 2-win Kansas football season

Rutgers is down program too but ...we ain't beating Rutgers.

Quitting even before the season begins.

Not quitting on them....just being realistic given the facts. No happy with it, wish I was wrong.

Good chance you will get your wish.

We have slightly warmer feelings towards Beaty because we broke the ugly streaks, he helped get us a couple good future stars in Corione and Pooka, and then we wish him well on his next endeavor and Jeff Long hires a competent coach.

Works for me. Not holding my breath....

a 2 win season should get Beaty fired..2 wins is what should have been expected in his 1st season...not in year 4