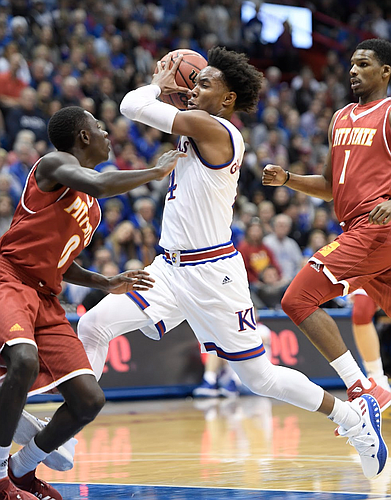 If not for a little lull midway through the first half during which Pitt State delivered a 14-1 run and Kansas showed a batch of bad decision making, this grade probably would be higher. KU played fast, hit the glass, went inside to Udoka Azubuike often and looked like a group that has spent some time playing together.

Thanks largely to their work on the glass, the KU defense put forth exactly the kind of effort you would expect in an exhibition game against an overmatched team. PSU shot just 31 for the game and did not reach double figures on the scoreboard until nearly 11 minutes had gone by.

Udoka Azubuike labored more than he should have (even if his final numbers of 17 points and 14 rebounds doesn't reflect that) but emphasized getting on the glass and Billy Preston (10 points on 5-of-5 shooting) flashed some pretty memorable moments, earning the start in the second half.

Lightning quick and unselfish as all get-out, the KU guards were as good as head coach Bill Self has been saying they are, paving the way for the vicious blowout from the opening tip. Malik Newman, Svi Mykhailiuk and Lagerald Vick all reached double digits, while Devonte' Graham added six points, six rebounds and five assists.

Preston, Marcus Garrett and Mitch Lightfoot all showed a clear understanding of their roles, which can be rare this early in a season and can be incredibly valuable for a team that has as much talent as this Kansas team.

I know that Udoka's numbers looked good, but it was against Pitt State. I was not impressed by a single thing that he did last night, he is very unconditioned, still can't make a free throw, and only has a left turning post move because he cant use his left hand. The offense runs with Graham and even during this game you could tell how much better it ran when he was on the court. Vick is so athletic and will surprise a lot of people this year that don't pay much attention to Kansas basketball. Garrett was our best outside defender and I left this game, just like the Missouri game, very underwhelmed by what Svi is doing so far. Lightfoot still need so much help out there, he still looks lost and a step behind even this Pitt state team, I hope he can figure it out before Big 12 play. Malik is just so quick and athletic, he already plays like a pro and hopefully he can keep it up and continue to improve as the season progresses. Then there's Preston, built like a pro, smooth jump shot, and can play with the best of them, but if he continues like he played last night, (before the injury) he is going to leave us constantly wanting more. He reminds me of Wiggins in that sense, he is always going to do just enough for you to see what he could do, then leave you hanging. This is just my unprofessional opinion of what I saw last night, no sky is falling opinions or anything, just a quick overview of how I felt the game went.