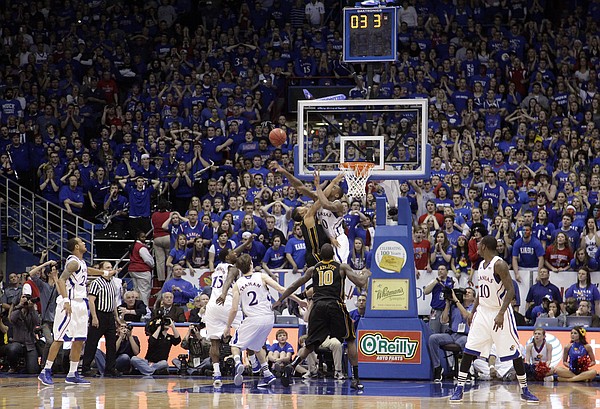 Thomas Robinson (0) blocks the Tigers Phil Pressey's shot with 3.3 seconds in regulation to force the game into overtime. The Jayhawks won the game 87-86 against the Missouri Tigers, Saturday, Feb 25, 2012.. by Mike Yoder

Thursday, the college basketball world on both sides of the Kansas/Missouri state line became a little more fired up than it normally is in late May.

See, Thursday was the day when the folks at ESPN announced the match-ups for the 2018 Big 12/SEC Challenge — 10 games between the two leagues on Jan. 27 — and because the Big 12 has just 10 members, compared with 14 for the SEC, four SEC schools were left out, as has been the case each year.

One of those four schools was Missouri, based on the Tigers’ woeful 2016-17 season (8-24 overall, 2-16 in conference) and finish at the bottom of the SEC standings.

Makes sense, right? Why would ESPN want to put a team like that on television when the whole goal of the challenge is to attract viewers and make money?

According to those on the Missouri side of things, the easy answer is this: Thanks to the addition of No. 1 overall recruit Michael Porter and a couple of other highly ranked and highly rated Class of 2017 prospects, the Tigers are no longer that team.

They’re talking NCAA Tournament over there now and I’ve even heard mention of the words national championship and Final Four. Good for them. That’s how it should be and that’s what they should be striving for.

Now that the Tigers figure to be at least decent again, the interest in renewing the rivalry is ramped up. Makes sense. I mean, much in the way that Kansas football would have been stomped by Mizzou during the first few years of MU’s time in the SEC, the Jayhawks would’ve handed the Tigers a couple of 30-point losses in the past few years in basketball had the two schools played each other. And what’s the fun in that for either side?

So the claim from the Mizzou side is that ESPN missed an opportunity to revive the Border War and pit Missouri against Kansas in the made-for-TV showcase, a move that no doubt would have injected some serious life and excitement into the region and created a game that would have been nearly as hyped and anticipated as the past two Kansas-Kentucky match-ups if not more in some ways.

But let’s face it; adding a player like Porter or even a coach like Cuonzo Martin, who already seems to be well on his way to turning things around in Columbia, is no reason for the rivalry to all of a sudden start back up.

Sure, it’s plenty of reason for folks on the Missouri side. And who could blame them for feeling that way?

But nothing has changed for Kansas. The powers that be in the Kansas athletic department, from AD Sheahon Zenger to basketball coach Bill Self and on down the line, is (and always has been) that it was the Tigers who left the Big 12, sold out their brothers and ended the Border War. Kansas did not do that and, therefore, does not feel responsible for the end nor obligated to clamor for a new beginning.

Besides that, Kansas does not actually need Missouri. That may be a harsh reality for two programs who share so much history and have created so many great moments throughout the past several decades, but it is the truth.

The Jayhawks, especially in basketball, are a national brand and stand to gain very little by playing the Tigers again. Sure it would fire up both fan bases and there could be some money to be made in terms of marketing, T-Shirt sales and that kind of thing. But it’s not as if KU is struggling to pay its bills. So instead of taking the quick cash grab, the Jayhawks appear to be content standing on principle.

You left us, they say, and we don’t need you back. Seems fair. Seems logical. Whether fans on either side like it or not, seems like it’s the way it’s going to be.

So all of this fuss about how KU and Mizzou should have been paired up in the 2018 Big 12/SEC Challenge is little more than white noise. For one, the rules of the challenge do not allow for it because of where Missouri finished in the SEC standings last season. For two, it really was never an option because Kansas is not interested.

That’s nothing new and the reasons have been clearly stated for the past several years.

If you’re one of those who wants to see it and is still holding out hope that it’ll happen, Bracketology’s your best bet for now.

". . . it was the Tigers who left the Big 12, sold out their brothers and ended the Border War. Kansas did not do that and, therefore, does not feel responsible for the end nor obligated to clamor for a new beginning. "

And that's reason enough for me.

Yep.. Plus MU basketball is irrelevant.

The very fact that mOO and its fans keep clamoring for a return of the Border War underscores how important it is to them, how much they need it, both financially and emotionally. Reason enough for Kansas, which has no such needs where that program is concerned, to continue to say no to a reboot.

Matt - what happens if the BIG12/SEC Challenge tries to line up a KU/Mizzou showdown? We know KU's position on the matter, but I'm not clear on whether the scheduling is 100% controlled by the conferences, by ESPN or a combo of the two. i.e. what if the conferences and ESPN decide they want the rivalry renewed -- does KU have the means to block that?

But where is that principle when it comes to scheduling Colorado, Nebraska, and Texas A&M? They sold us out too, but we scheduled them.

I think the argument is that the Mizzou case was different, and they were the last to go. Colorado and Nebraska were part of the first whirlwind which happened in June 2010, just a day apart. There was no time to discuss the consequences of their leaving. Texas A&M was next (August 2011), and then the rumors of Mizzou leaving hit full speed. They didn’t announce until November 2011. We had 2+ months of debating and discussing the issue, and they made it clear if they left they would want to keep the Border War going, and KU made it clear it was a conference rivalry and they couldn’t have both – they had to choose. I’m not saying the argument is right, but I think that’s why it’s different for KU/Mizzou vs the other 3.

It's personal with MU, always has been, and as far back as the civil war. That's really all you need to know. And when you can stick it to MU, well......

Mizzou broke up one of the best, longest, and most fierce rivalries in college sports. So they can take a jump as far as I'm concerned. We have been struggling since then to find another rivalry with K-State, or perhaps Iowa State. But the school we should look at as a true rival is Kentucky. We are the bluest of blue bloods. #1 and #2 all time winningest teams in college basketball. And we both suck at football (us more than UK, but that could be changing, too.) Regardless of whether we get matched up against UK in the Champions Classic at the beginning of the year, or in the Big XII/SEC matchup at midseason, we should be scheduling UK in a home-and-home matchup every year.

Exactly. The football rivalry was even more fierce than basketball. The longest west of Mississippi, and the 2nd oldest in the country I think. And it was tied when they made that decision.

They threw away that rivalry. They don't even deserved to be in the discussion to play us.

I don't know one KU alum, whether they live in Kansas, Missouri or elsewhere who wants give those jerks the "satisfaction" of being on the same field or floor with us.

If we ever do play them again in a tournament game, I hope we beat them by 50+,

"...the Jayhawks would’ve handed the Tigers a couple of 30-point losses in the past few years in basketball had the two schools played each other. And what’s the fun in that for either side?"

IMO, the best time to play Misery is with a bid to the tourney on the line for them. Knocking them off from the tourney might be worth it. This challenge, however, would be played far before that, so it isn't the make/break game that would make this fun.

I agree with Self - no matchups where possible.

What I remember most is the dirty shenanigans of the Missouri fan base, especially the Antlers, outside the games. Getting phone numbers and waking up players and coaches at all hours, hoping they'll be fatigued for the game; Ordering many pizzas to be delivered and charged to the players; and on and on and on.When Missouri left the Big 12 my attitude was "good riddance." And I feel the same today. They burned their bridges and built new ones. Let's just keep it that way. As said in the article, we don't need them. If they need us, it's a little late to be crying about it now. Should have thought of that years ago.

The whole deal with the Slavers was their AD was in charge of keeping the league together/recruiting new schools. They have always felt slighted for not being invited to the Big 10 which Nebraska has been recruited for years and resisted. Knowing this the Big 10 did a bait and switch with Moo. Entered into discussions with them which angered Nebraska who has never been happy with Texas' refusal to share and share alike. Read Tom Osborn's comments about doublespeak from the league. Guesd who he's talking about? Yep, you got it Moo. While supposed to be working things out they were negotiating with the Big 10 and the SEC. When Texas didnt budge Nebraska bolted. CU was in financial crisis and got a huge payday from Pac 10 so they left. A&M who feels like the stepchild to UT followed then Moo. As far as Im concerned it lands right at their doorstep and hell no we dont play them. As far as im concerned we forfeit if someone forces us to play them. It wouldve been a huge mess if KU and others left as well. My second gripe is ESPN and whatever stupid outlets are killing college sports with the push to super conferences. There wont be a single rivalry left.

Yes, I remember well when the Missouri guy (AD?) was heading up the Big 12 initiative to keep the conference together while backdooring their own exit. My opinion of Missouri was poor before that happened and as far as I am concerned they stabbed the rest of us in the back. And thus I will never welcome them to play Kansas for any reason or in any sport.

I'll never forget Osborn's line at the press conference when Nebraska left the Big 12. "We didn't start this."

Although Nebraska left first, MU started it by lobbying to join the Big 10. Screw 'em.