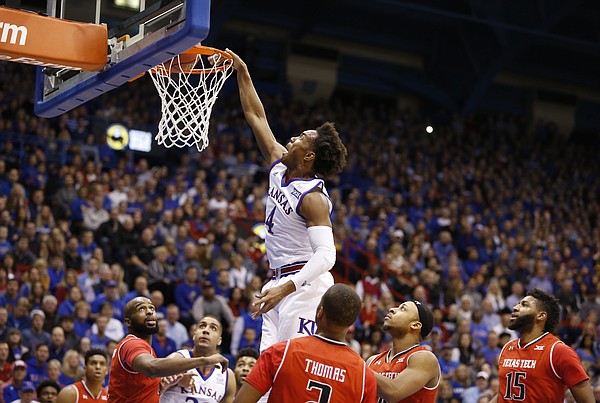 Kansas guard Devonte' Graham (4) puts down a dunk against Texas Tech during the first half, Saturday, Jan. 7, 2017 at Allen Fieldhouse. by Nick Krug

Quick grades for five aspects of KU’s 85-68 victory over Texas Tech at Allen Fieldhouse on Saturday.

The Jayhawks shot better than 50 percent from the floor, 50 percent from three-point range and made five consecutive shots during the decisive run that put the game out of reach with around five minutes to play.

The effort, activity and tenacity were all there and Kansas also limited the Red Raiders to 41 percent shooting from the floor. The only reason for the minus was KU’s inability to keep Tech from getting open looks from three-point range. Overall, though, a much, much better effort on the defensive end of the floor.

None of KU’s big men — all two of them — did much in this one. Bragg and Lucas combined for 11 points and 12 rebounds but also had a few forgettable moments, especially Bragg who struggled inside and occasionally got lost on defense.

Devonte’ Graham (20 points) was hot early, Mason (26) was hot late and the Jayhawks got a big time effort from the three-headed monster of Graham, Mason and Jackson (63 of 85 points). Sviatoslav Mykhailiuk did not have much of an encore performance to his game-winner against K-State on Tuesday, finishing with five points and four rebounds before fouling out in 21 minutes.

Neither Bragg nor Lagerald Vick did much to write home about and both sent Bill Self looking to the bench to plug a starter back in a few too many times throughout this one.

TTU took 28 threes. They certainly didn't have much faith in their ability to score inside. Kansas won the rebound battle decisively.

Lucas and Bragg did fine. 11 points and 12 rebounds from the center position is nothing to sneeze at.

In reality, Jackson is part of the front court now. C+ for 28 points and 22 rebounds?

Carlton continues to work hard. He's got a big case of good-play, bad-play right now. I feel like he's going to break out some time this season. If he does, watch out.