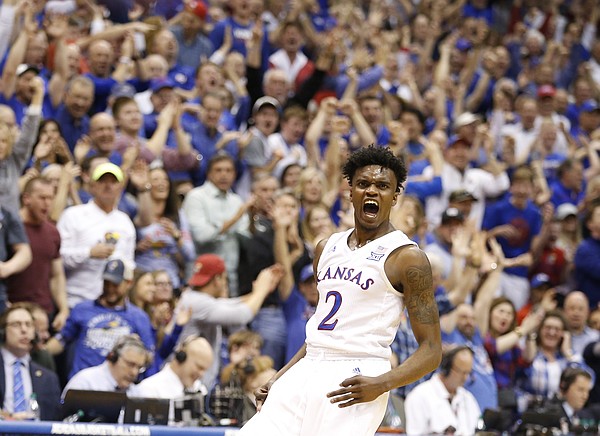 Kansas guard Lagerald Vick (2) celebrates a three during the second half, Monday, Feb. 27, 2017 at Allen Fieldhouse. by Nick Krug

Making 10-of-10 down the stretch to finish at 50 percent for the night saved what, for a while, looked like it might be the Kansas offense’s first C grade of the season.

Oklahoma got a ton of layups and grabbed 13 offensive rebounds, but KU suffocated the Sooners down the stretch. Even in the first half, when KU’s offense was lousy, the Kansas defense forced OU to shoot 25 percent from the floor to keep Kansas in the game.

Forward Landen Lucas was good in his home finale, finishing 3-of-3 from the floor, 2-of-2 at the free throw line and with eight points and eight rebounds. Add a few more rebounds to that line and you’ve got the signature Lucas line. The best news here was, because of foul trouble, Lucas was limited to fewer than 30 minutes (28) for the second game in a row, giving the big man some much needed rest.

Mason had a rough first half and a strong finish. Devonte’ Graham did not assert himself until the end and Josh Jackson turned it over eight times. Those uncharacteristic traits from KU’s top trio certainly made things harder, but, as usual, there’s no way they win this one without all of them.

Outside of Lagerald Vick’s 11 points and four rebounds in 22 minutes, the Jayhawks didn’t get much from a bench that, for one night, included regular starter Svi Mykhailiuk. Sitting so senior Tyler Self could make the lone start of his career, Svi was 1-of-4 from the floor, 0-of-2 from 3-point range. Recently strong big men Dwight Coleby and Carlton Bragg Jr. both struggled, finishing 0-of-4 from the floor with 6 rebounds in 17 minutes. Bragg did grab three offensive rebounds.

Without Svi getting back on track and Bragg becoming consistent it is hard to see how KU can make it to the Final Four, maybe not near that far.

Before team seemed to find Svi in rhythm. Now he seems to have to force his own shot. We went a lot of one on one last night.

This team plays too many close games. Their margin for error is not all that much. We could easily have 5 more losses. And it seems that no lead is safe.