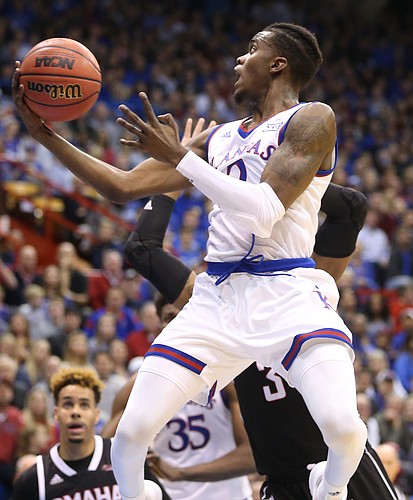 Kansas guard Lagerald Vick (2) swoops in for a shot during the first half on Monday, Dec. 18, 2017 at Allen Fieldhouse. by Nick Krug

Quick grades for five aspects of KU’s 109-64 rout of Omaha on Monday night at Allen Fieldhouse.

Svi Mykhailiuk was lights out from the outside and Udoka Azubuike was too much inside. Beyond that Devonte' Graham, Malik Newman and Lagerald Vick all made quality decisions with the ball for most of the night and knocked down a few shots of their own. Easy A.

Omaha still got to the rim a few too many times and had more than a couple of possessions where they got second and even third chances. Overall, though, Kansas was intense and aggressive on the defensive end, which is no small feat considering the Jayhawks had just played two days ago and were facing an opponent that would have been easy to overlook.

Azubuike recorded the third double-double of his KU career and his second in a row, proving that both the big fella and this team are starting to figure out how to run more of their offense through the 7-footer. It should be noted that Omaha offered little resistance to Azubuike's massive size, but the effort and execution were there and that's all that mattered. Mitch Lightfoot chipped in with 15 solid minutes and also continues to look more and more comfortable in his role as the season goes on.

The trio of Devonte' Graham, Svi Mykhailiuk and Lagerald Vick looked so in sync throughout this one and played loose and free leading to easy baskets for themselves and their teammates. Add to that the fact that Sam Cunliffe gave good effort on both ends and Marcus Garrett, though still struggling offensively, got back to his utility-man ways, and this was an easy A.

It might not look like much, but Cunliffe's 9 points and the fact that KU had another option to give guys a rest was big not necessarily for this game but for the future. It was the perfect game for Cunliffe to really get his feet wet and gain some confidence. Nothing but dog fights from here on out.