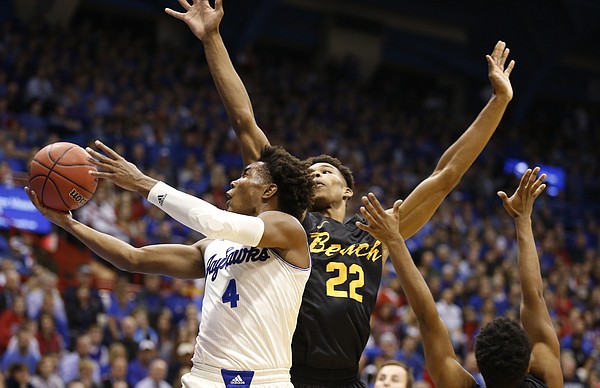 Kansas guard Devonte' Graham (4) gets in for a bucket past Long Beach State forward LaRond Williams (22) during the first half, Tuesday, Nov. 29, 2016 at Allen Fieldhouse. by Nick Krug

The Jayhawks hit 9 of their first 14 three-pointers and 14 of 26 for the night. Beyond that, KU was insanely good in transition and shared the ball so well. There were a couple of ill-advised shots and a few too many turnovers (19) but this was a solid A effort.

KU limited LBSU to 40 percent shooting, forced 15 turnovers and used those turnovers to create transition offense. But the 49ers scored a few buckets right at the rim and shot 42 percent from three-point range.

Udoka Azubuike played hard, played aggressive and played a lot. Carlton Bragg Jr. did not, picking up two fouls in the first 1:13 he was on the floor. Bragg came around in the second half and played much harder — not necessarily much smarter — and Dwight Coleby gave a few decent minutes, as well, on a night when Landen Lucas did not play.

Throwing star of the game Lagerald Vick into the backcourt mix certainly did nothing to hurt the Jayhawks in this one. Vick was great from minute one and Frank Mason III and Devonte’ Graham, who combined for 20 points, 12 assists and 8 rebounds in 28 & 29 minutes apiece, did everything they could to keep his flow going.

Svi knocked down a few jumpers and Bragg played a strong second half. Other than that, the bench did not provide much to write home about.

Well, as to the bench grade, I suppose you could say that Bill is playing the right starters.