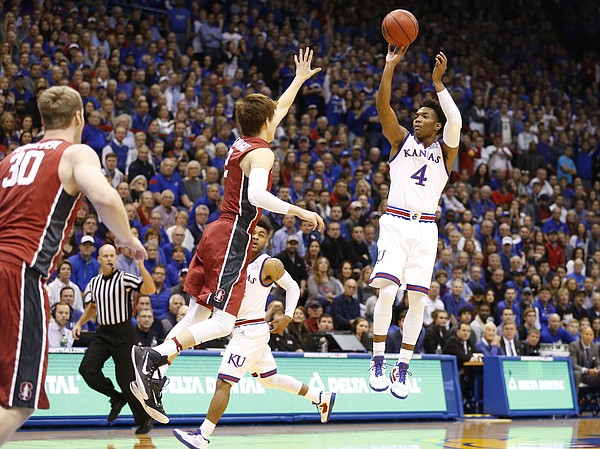 Kansas guard Devonte' Graham (4) puts up a three during the first half on Saturday, Dec. 3, 2016 at Allen Fieldhouse. by Nick Krug

Quick grades for five aspects of KU’s 89-74 victory over Stanford on Saturday afternoon at Allen Fieldhouse.

A low turnover total, terrific transition numbers and a great percentage from the floor and even better mark from three-point range. Easy A, approaching an A+.

Stanford shot 50 percent in the first half and big man Reid Travis had his way with the Jayhawks down low. KU’s defensive intensity went up tremendously in the second half, when Stanford shot just 34.6 percent from the floor.

Landen Lucas returned from injury and played with a good spark in the first half. But his struggles returned a little in the second half and Carlton Bragg and Udoka Azubuike remained inconsistent. You know the final stat line for Stanford big man Travis (29 points, 9 rebounds, 19-of-22 at the FT line) will not sit well with KU coach Bill Self.

Devonte’ Graham was sensational, Frank Mason was right there with him and Josh Jackson did his thing, as well. Probably could copy and paste that sentence for every one of these the rest of the way. KU’s guards were red hot from three-point range in this one, as well.

Svi hit a couple of threes and Lucas did a nice job in the first half. Other than that, though, not a lot to write home about from the bench on a night when Dwight Coleby fouled out in just seven minutes.