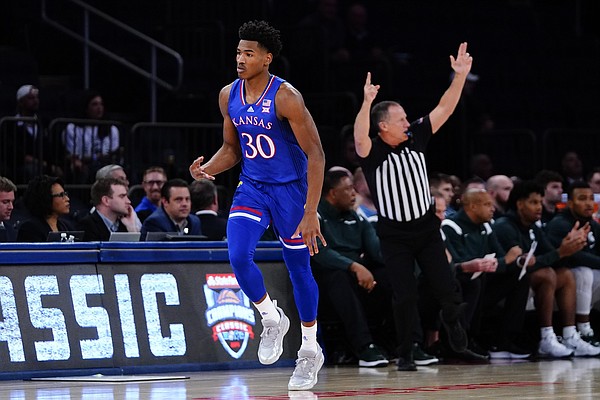 There’s no time like the season opener to overreact to what you witnessed out of one player or an entire team on a basketball court.

And, man, did the Kansas Jayhawks’ season-opening win over Michigan State at Madison Square Garden provide opportunities to formulate some exaggerated assumptions.

Welcome to Overreaction SZN at KUsports.com.

Not even head coach Bill Self has a great feel for this team quite yet, and it might be January or February — or even March — before we know what the 2021-22 KU roster is truly capable of.

For the time being, though, here are some potentially overly irrational takes, based on what we saw in one game from a team that played six newcomers in its opener.

Could Ochai Agbaji be one of the best 3-point shooters in the country this year?

The senior shooting guard’s 3-point numbers weren’t insane, but they were more than respectable. Agbaji went 3-for-6 from deep to open his final year in a KU uniform.

Even more promising than Agbaji’s production were those new and improved mechanics on his shot. The 6-foot-5 veteran now gets those 3’s off so quickly and so smoothly and at such a high release point that it seems like every attempt is going to fall through the net.

After going 78-for-207 (37.7%) last year, Agbaji looks like an even better 3-point shooter now. The catch-and-shoot opportunities he had looked automatic.

Actually … is Agbaji just one of the best wings in the country?

Agbaji proved to be anything but one-dimensional offensively, and lit the Spartans up for a career-best 29 points. The efficiency was something to behold, too: 9-for-17 from the field, 8-for-8 at the foul line, the aforementioned 3’s.

The variety involved getting to the rim, making a point to get to the free throw line, scoring in transition off of steals and showing off his ball handling by going behind the back on the fly after receiving an outlet pass.

Who is this man? Because he doesn’t look like the Agbaji that was advised to return to KU for one more year instead of entering the 2021 NBA Draft.

Now that Marcus Garrett is gone, is KU just going to have to outscore everyone?

In the 2020 NCAA Tournament that never was, KU was the favorite to win it all, in large part because of the trio of defenders Self could rely upon: Marcus Garrett and Devon Dotson on the perimeter, and Udoka Azubuike in the paint.

Last year, the Jayhawks still had Garrett and still had a top 15-ish defense (12th, per KenPom).

Now Garrett is doing Heat culture things in Miami, and the Jayhawks don’t have any one defender who can shut down one side of the floor — Self just last week likened Garrett to Deion Sanders.

There’s no lockdown perimeter defender, nor an intimidator or shot eraser at the rim on this KU team. A Michigan State team that didn’t look too overwhelming offensively shot 46% from the floor and scored 40 paint points, despite its 16 turnovers.

The most energetic and willing defender for KU looked to be freshman KJ Adams. But the 6-7 wing’s likely a year away from playing major minutes (he played 4 vs. MSU).

Will this team have a defensive identity? Will the Jayhawks be able to make stops in a one- or two-possession game in crunch time?

Obviously this was more of a first-half problem for KU: Martin didn’t even attempt a shot in the first 20 minutes.

Even though Martin finished with 15 points, it was odd to see him playing off the ball almost exclusively in the first half.

Martin is faster than almost anyone he will encounter — even with the ball in his hands. And KU becomes far more dynamic offensively when Martin is involved.

Dajuan Harris is KU’s point guard, but that doesn’t mean Martin should ever be a 2-guard relying on others to set him up. You can tell that Martin always wants the ball in his hands, because he’s a natural and confident scorer.

His shoot/score-first mentality might not be exactly what Self wants from him, but the more Martin gets chances to attack from the wing or the top of the key, the better it will be for the offense and KU’s longterm ceiling — especially if Self can get Martin to set teammates up, too, when he draws the defense in.

Who would’ve thought freshman big man Zach Clemence would be KU’s second-leading scorer in the first half?

The 6-foot-10 backup came in ready to produce, and put up 7 points on 2-for-3 shooting in just 4 minutes of playing time.

Clemence looked confident and comfortable offensively inside, scoring a layup and getting to the foul line (2-for-2).

Though Clemence did fire up and hit a 3-pointer during his limited minutes, he looked much better showing his good hands on a Bobby Pettiford drive and dish for a lay-in.

McCormack scored 10 points, but he was 4-for-11 and forced too many of his attempts in the post. The Jayhawks are talented enough on the perimeter offensively this year, that they don’t need to try and play through McCormack nearly as much as they did last year.

What are your thoughts on Bobby Pettiford?

I thought he was the most surprisingly-effective newcomer in his limited 11 minutes.

yeah- it would sure look like there is a serious drag-out battle between Pettiford and Yesufu right now for the 3rd small guard spot, which should be fun to watch play out

First game is an introduction to the new team. We could see the talent, but its just a first step to creating a smooth, efficient and balanced team. Bill has a great problem: so many excellent players.

Self has always been good at figuring things out. He loves defense, so we can trust that defense will come. He can motivate players to fit into his scheme; and he's demonstrated that he can change his scheme to fit his players. He's got the players... virtually everything he could wish for.

We'll be pretty good this year. It will be exciting to watch.

I’d like to see Clemons and McCormick at the same time. The only way David scores is on short jump hooks and that’s just too unreliable.

My judgement R Martin needs to be the point guard and lead the show. When Wilson becomes available Harris needs to be the replacement for Martin. As for McCormack he needs to fake his shots sometimes and possibly take a step or two after the fake. Last night he was defended very well when he tried to shoot.

A step or 2 is sometimes called traveling. 😉

Looks like Ochai and Remy both have put in considerable time on FTs. That will win games. I think we were 13-14 in ‘08 against Memphis.

As nice as Ochai’s shot is nice, Remy might have the lowest release point outside of junior high. It’s quick and fearlessly deep but I can imagine that’s one reason he didn’t get a sniff from the big dogs.

lol- He has a totally Jr. high-caliber FLAT shot for sure. A Jump to the NBA will require a MAJOR rebuilding in his shot mechanics in the off season. But he's a scorer, so don't mess with it till after the tourney...