USC's Evan Mobley is a problem, capable of ending KU's season in the 2nd round 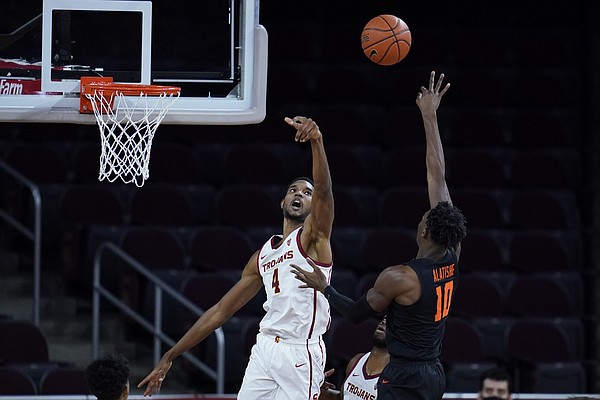 If facing one set of brothers in the NCAA Tournament translated to automatic success against any pair of siblings, then No. 3 seed Kansas would be a shoo-in for the Sweet 16.

With all due respect to Eastern Washington’s Groves brothers, the Jayhawks have an entirely different type of challenge on the horizon Monday night, when they take on USC and Evan and Isaiah Mobley.

Tanner and Jacob Groves may have lit up KU for a combined nine 3-pointers and 58 points in the first round. But the Groves were also drawing some comparisons on Twitter to Jonah Hill and Michael Cera in “Superbad.” They were more unassuming than menacing.

When you look at Evan Mobley in particular, USC’s freshman 7-footer with a 7-4 wingspan doesn’t exactly conjure up images from a slapstick bro comedy. It’s more like watching Chris Bosh 2.0.

“He’s a few pounds away from being an NBA All-Star,” KU coach Bill Self said during his Sunday video press conference. “He’s that good. That’s a big challenge.”

Evan Mobley (16.8 points, 8.7 rebounds and 3.0 blocks per game) is so impressive on both ends of the floor he has a chance to surpass Oklahoma State’s Cade Cunningham and become the No. 1 overall pick in the 2021 NBA Draft. Evan Mobley’s the exact type of multi-talented prospect that could be a matchup nightmare for KU. The kind of player who can almost singlehandedly end a team’s season in March.

But Even Mobley isn’t the only athletic Trojan the Jayhawks have to worry about. USC (23-7) has become one of the best defensive teams in the country this season (currently No. 10 in adjusted defensive efficiency at KenPom.com) by rolling with an athletic and long front line. Evan Mobley (34.1 minutes a game) is almost constantly on the court, and the Trojans team him with his older brother, 6-10 sophomore Isaiah Mobley, as well as either 6-8 junior Drew Peterson or 6-9 sophomore Max Agbonkpolo. A senior, 6-9 Chevez Goodwin also plays inside.

Those spry USC bigs and forwards, with wingspan for days, prompted Self to bring up the personnel of the Texas team that swept KU in the regular season.

“You think about Texas’ length and how much they bothered us with Kai Jones, (Jericho) Sims and (Greg) Brown. I see the same type of stuff,” Self said of what came to mind when he watched USC. “But I think Evan’s even longer than those guys. I think he’s even longer than Kai Jones (6-11).” 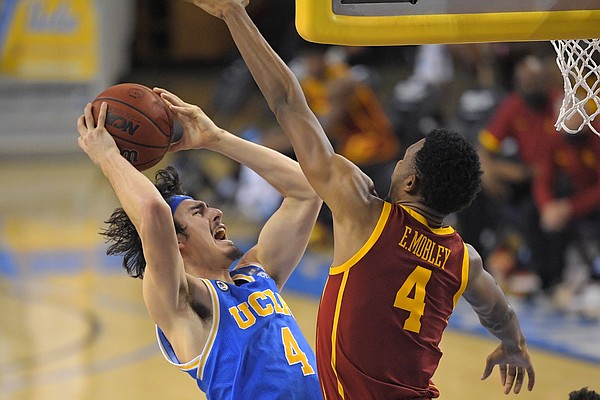 The Trojans actually play bigger than Texas. The Longhorns typically played with three guards, while USC only plays with two. And oftentimes head coach Andy Enfield has the 6-8 Peterson or 6-7 guard Isaiah White at one of the guard spots.

With all of those arms taking up so much air space defensively, the Trojans can torment foes on defense. Just ask Drake. The Bulldogs were down 40-37 at halftime to USC before they opened the second half going 2-for-23 from the field, missing seven consecutive shots at one point and 12 more in a row at another.

All of this from a Drake team ranked 32nd in adjusted offensive efficiency by KenPom (KU ranks 45th). Drake coach Darian DeVries said the zone USC utilized at times also bothered his Bulldogs.

“That length (made it) hard for us to get in the interior and finish. We were trying to get it inside to anywhere around the rim where we could get some scores or some easy baskets,” DeVries said. “They're extremely long, and we couldn't get to the spots we wanted to and finish over them. We weren't able to get maybe as clean of looks as we would have liked on the 3’s against the zone.”

When a team is skillful enough to get into the paint against USC, the Trojans have one of the best shot blockers and alterers in college basketball waiting at the rim in Evan Mobley. Listed at 215 pounds, he doesn’t have any bulk on him yet, but that doesn’t make him any less effective at protecting the basket. Per KenPom, Evan Mobley ranks 32nd in the country with his 9.2% block percentage.

After he blocked three shots against Drake in the first round of the West region, Evan Mobley said he’s learned through the course of this season how to contest more shots without getting himself into foul trouble.

“Yeah, in college there's a lot more details that goes into defense than in high school,” the 19-year-old phenom said. “So I really just used what the coach taught me. Stay down — that was probably my biggest thing I learned, because I get jumpy sometimes. But I just try to stay down and contest the shot, if not block it.”

Evan Mobley hasn’t fouled out of a game all season, and has only picked up four personals twice, the last coming a month ago in a loss to Arizona.

Currently ranked No. 5 in KenPom’s Player of the Year standings, Evan Mobley isn’t just a defensive menace, either. At 7 feet, he can actually handle the ball and attack off the dribble, too. ESPN draft expert Mike Schmitz recently praised Mobley for having touch all over the floor.

“He has those unicorn qualities handling the ball in space,” Schmitz said.

That rare combination of length and ball handling, Self said, reminded him of the Longhorns’ Kai Jones

“He was hard to guard because his one step equalled our two,” Self said, drawing the comparison between Jones and what Evan Mobley can do. “You’ve got to do a great job of keeping him in front of us, but still yet pressure him and not let him get to his spots.”

Defending a long and nimble 7-footer on the perimeter could prove difficult for KU junior David McCormack, who is best defensively closer to the basket.

Even so, the Jayhawks’ best big man said he is looking forward to matching up with the future lottery pick. McCormack also made it clear much more will go into the outcome on Monday night than any one particular matchup.

“It’s not player against player. It’s team against team,” McCormack said. “The team is the on that wins the game, not the individual.”

And it might take KU tinkering with defensive assignments to find the right defender for Evan Mobley, the Pac-12’s freshman of the year, defensive player of the year and player of the year. Marcus Garrett might be better equipped than anyone else on the roster to defend the versatile USC star outside. Plus, if KU took that route, McCormack and/or Mitch Lightfoot could defend the 6-10 Isaiah Mobley (9.2 points, 7.3 rebounds).

Evan Mobley, as the saying goes, is a problem.

“He’s unbelievably talented,” Self said. “He’s extremely skilled. He can play behind the arc and certainly play within it, and he can put the ball down.”

And even if the Jayhawks can limit him offensively, his impact defensively appears inevitable, particularly with his brother and a slew of other long defenders at his side.

Seth and Evan from “Superbad” aren’t running out of the tunnel Monday night at Hinkle Fieldhouse. More like Jules and Vincent from “Pulp Fiction.”

“Certainly we’ll try to compensate with the Mobleys’ length and athletic ability and skill set,” Self said, “by trying to do things a little bit different than what we did with the Groves brothers.”

That might explain why CBS Sports has us listed as a 1-point underdog in the betting odds despite having a higher seed than Southern Cal.

I hope KU can get those brothers into foul trouble. They can't stuff shots taken from the free throw line, especially if they've fouled out (and yes, I saw that Evan has only had four fouls twice).

Unlike McCormack, when blocking shots Evan doesn't swing his arms, that's what makes it harder to send him to the bench. His height plus wing span allows him to just go up straight without fouling. He'll overpower our bigs combined, and a handful to contain. It'll be hard to watch, but let's just hope our defense will be the best we will ever see! Rock Chalk!

All I can say is that we better be hitting our three-pointers (hello, Ochai?).

The Jayhawks need to apply pressure defense on the perimeter without fouling. Tough task.

3 Big XII teams lost yesterday in games they should have won...we need to salvage some respect for the conference. We don't just need to win, we need to win convincingly. And I want more KU basketball after today!