Jayhawks going around in circles and running out of time 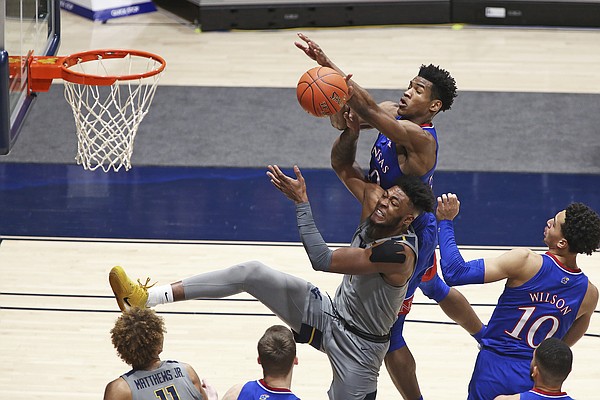 A top-five team a little more than a month ago, before they lost their way, the Jayhawks are going around in circles and about to lose their ranking altogether.

Throughout a tumultuous start to 2021 for the Kansas basketball team, an early February trip to West Virginia began to look like a milepost for the entire season. The Jayhawks, dealing with so many issues atypical of Bill Self’s run with the program, weren’t going to do a 180 with a single January win. But if enough tweaks were made and solutions found, the Jayhawks, by Saturday’s game in Morgantown, W.Va., would have a chance to showcase how far they had come.

Instead, they remained a team searching for the turn that will get them back on the right path in a 91-79 defeat.

Now ranked No. 23 in the country — at least until Monday, when they are expected to fall out of the top 25 for the first time since January of 2009 — the Jayhawks were an underdog at No. 17 WVU, but not by much. If Self and his players truly had left their January funk behind them, it would’ve been apparent in a winnable road game.

The litmus test for KU’s progress showed it remains off course as March gets closer by the day and the Jayhawks (12-7 overall, 6-5 Big 12) keep stalling out.

The second half epitomized the team’s vacillating play this season. The Jayhawks exploded out of intermission. Attacking offensively, finishing layups and erasing a 10-point halftime deficit.

It was the most impressive opening to a second half for KU this season. Was this the stretch we would be referencing a few weeks from now in March as the moment the season turned around?

It wasn’t. The same group that raced back so abruptly it looked like the Jayhawks were finally fed up with failing to live up to the program’s lofty standards regressed back closer to their floor with the game in the balance late.

After a David McCormack basket in the paint cut WVU’s lead to five with 5:31 to play, the Jayhawks’ offense disappeared when they had to have a strong finish and they couldn’t lock down on defense.

Marcus Garrett misfired on a 3-pointer when left open early in the shot clock, McCormack was off the mark with a jump hook off an offensive rebound, Ochai Agbaji’s turnaround jumper in the paint rimmed out, KU gave up an offensive rebound that led to a WVU 3-pointer and Jalen Wilson threw a pass into the backcourt for a turnover.

KU’s defense, a problem area Self often has referenced over the past several weeks, again did it no favors.

All of it left Self, who has seemed uncharacteristically positive about his team’s tribulations during this ongoing rocky stretch, bemoaning the Jayhawks’ inability to make stops and dismissing any individual offensive advancements that were a part of the team’s fifth road loss in a row.

Even if the Jayhawks did show some defensive ability for good portions of WVU possessions, Self said the Mountaineers routinely made his team pay late in the shot clock.

“It seems to me like that basket grows when other teams shoot it in that period of time,” Self said. “And we’ve got to be able finish possessions.”

Garrett said almost the exact same thing about KU’s defense — back in the middle of January.

The Jayhawks are still hunting for a performance that would get them back on track. And they’re running out of chances to finally come across it.

“I’ll be candid with you, I didn’t see much defensively that I would consider very positive out there,” Self said.

The losers in five of their past seven games, the Jayhawks at some point need to beat an NCAA Tournament-level team again, mainly to remind themselves that it’s possible and perhaps rekindle what has eluded them since beating Oklahoma at home back on Jan. 9.

We all knew KU could beat TCU and Kansas State. Can the Jayhawks beat Oklahoma State on Big Monday on a quick turnaround following their latest setback against a quality opponent?

The rematch with the Cowboys, who won 75-70 in Stillwater, Okla., last month, seems crucial for these Jayhawks, who too frequently since the start of January lose their sense of direction when taking on a legit opponent.

KU’s defense is really easy to score on. Today, the ‘eers scored points. Hard to win when that happens.

Not only did we not guard, we did not even think to guard evidenced by how we played Culver who is dead red left handed. He was allowed to move every time to favor his left hand without any resistance. No double team. No hedge on his right when he had his back to the basket. Certainly, the scouting report had to cover this. Unbelievable. Missed layups. Terrible defense. Careless just handling the ball without any pressure. Less than 50% of the 50-50 balls. Inconsistency. Lack of passion. No bench. No fun. Hard to watch.