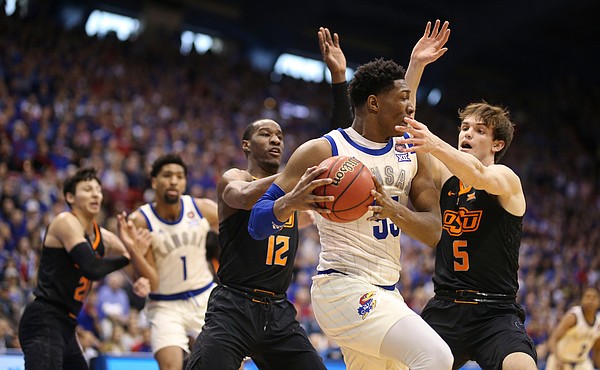 Before the season began, not a whole lot was expected out of David McCormack during his freshman year with the Kansas basketball program.

It wasn’t that the 6-foot-10 forward from prep powerhouse Oak Hill Academy lacked potential. It was just that McCormack was joining what looked like a very crowded frontcourt, with 7-footer Udoka Azubuike, 6-9 forwards Dedric Lawson and Silvio De Sousa and 6-8 Mitch Lightfoot all possesing more experience than the freshman.

Of course, McCormack’s expectations have changed significantly since then. Azubuike suffered a season-ending wrist injury and De Sousa was ruled ineligible by the NCAA. What’s more, as KU lost two potential starting guards for an unknown amount of time due to Marcus Garrett’s injured ankle and Lagerald Vick’s leave of absence, all of the sudden Kansas needed McCormack — now.

After not playing a single minute in KU’s road loss at Kansas State on Feb. 5, McCormack was thrust into the starting lineup. The freshman big man went from rarely playing 10 minutes in a game to hearing his name called during pre-game introductions.

The Jayhawks (19-6 overall, 8-4 Big 12) are 2-0 with McCormack in the starting five, with wins against OSU and TCU. But that doesn’t mean his transition to a new role has been easy.

As McCormack continues getting used to starting he said both Azubuike and De Sousa have helped him out by offering up some advice.

“Don’t try to go out and make home run plays and be a superstar,” said McCormack, relating their message. “Just do what you know how to do and do what you do best, and you can work your way up to doing things like that. That’ll benefit the team in the times that it counts.”

Playing alongside more established members of KU’s rotation, McCormack hasn’t been asked to do much. Through his first two starts he’s scored 4 total points (with all of them coming at TCU) while playing a combined 31 minutes. He’s just 1 for 6 from the floor as a starter, but is averaging 4.0 rebounds a game, plus 1.0 blocks and no turnovers.

Sometimes McCormack is running so hard or such a ball of energy inside while positioning for a rebound or posting up that it appears he’s trying to do too much. His shots inside have looked hurried, too, and sometimes the ball gets away from his hands as he goes after a rebound or entry pass.

Effort and want-to clearly aren’t issues for him. McCormack said what he must continue to work on is slowing things down.

“I know right now I’m not the playmaker type, the go-to guy,” he said. “But I know if I need to set a ball screen or get a specific rebound that’s my job to do and make sure I do that properly.”

KU coach Bill Self has praised one such aspect of McCormack’s impact repeatedly. The freshman’s footwork allows him to defend ball screens effectively on the perimeter.

The 6-10, 265-pound forward said he’s been working on his ball screen defense “a while,” predating his time at KU.

“I knew that was going to be a big thing, coming into college, just working on my lateral movement and speed,” McCormack said, adding coaches and Azubuike talk with him regularly about little things that can make him even more functional in that role. “Getting out and hedging the ball screen but making sure I get back quick, as well.”

With only six games left in the regular season, McCormack is currently one of four freshmen starting for KU — though that could change when Garrett is cleared to play.

Self and his staff ask much more of guards Devon Dotson, Ochai Agbaji and Quentin Grimes than they do of McCormack. But the big man who was a McDonald’s All-American just a year ago is happy to be contributing with his fellow freshmen.

“Other than youthfulness I think we all bring energy in our own way,” McCormack said. “Devon is just speedy, fast. You know, he does what he can in leading. And as you can see, Ochai, coach says he has like a model-type smile. He always has great energy, great positivity. I just bring as much energy as I can as far as rebounding. And Q just tries to bring people together, as well. So I think we just connect people in our own way.”

At some point, everything will begin clicking for McCormack, and he’ll provide KU with even more. Maybe it will happen this season, or maybe it will show when he’s a sophomore. In the meantime, he’ll keep doing the little things that can help, as advised by the big men who were supposed to be playing in front of him this season.

I think McCormack’s presence in the paint gives opponents something to worry about that isn’t there with the four guard configuration. That’s particularly true on defense. He clearly has quick enough feet to show on screens and maybe even pick up a switch. I’d like to see him in the starting lineup even when Garrett gets back.

Mack is good at the “hedge” but lacks basic offensive skills. Wait’l next year.

Interesting, that Silvio would have had such a big year this year. His talents around the basket would really have opened it up for Lawson. In fact he would have been a much better pairing, the Azubuike. Maybe be would have alternated all 3, probably, and we would have been so tough on the inside.

But the reality is, we are lucky that Agbaji can shoot threes, drive, play defense and rebound, Grimes is playing better when he just lets it rip, just needs to stop and pop on some 8 ft in jump shots, to keep defenses worried, and get fouled, and also free up Dotson to drive.

The three musketeers with Lawson double doubling, and Mitch and David playing hard and tough can make a realistic run. I would not be surprised if Garrett comes off bench, when he first comes back.

I personally agree with you that the best case scenario would be to continue this starting lineup when Garrett returns. We rebound and defend the paint so much better with two bigs and Garrett would allow each of the wings an appropriate rest. He will also provide a guy to come in when one of the kids is having an off day. It will be interesting.

Mitch deserves to start over McCormack period. Lawson has played very well with Lightrfoot in the game. McCormack needs to come in replacing Lightfoot when he needs a break or is in foul trouble.

This is why kids lost confidence, don't have 'killer instincts' and not play 110%:

“Don’t try to go out and make home run plays and be a superstar,” said McCormack, relating their message.

Maybe I misunderstood. But I always tell my kids to watch Kyrie, practice his moves, play like him in each practice or game. Only if you believe you're superstar that you can grow your potential. He is getting better and better. He has more confidence with his spin moves.

You misunderstood and are trying to use it as a knock on Self, shocking.

Hi Shannon, thanks for dropping by. I'm glad it's a misunderstanding.

McCormack will definitely improve with more playing time experience, there is no substitute for seasoning (McCormick of course). WVU's big guys are also young and lack experience, so I expect David to blossom today from the "whirling dervish" to the "seasoned big" with a double-double performance! I might be getting a bit carried away here.

who is our big man coach now? since danny left we have power forwards and centers injured and/or non counseled on how to legally play. we have mitch just sidelined when he could be a withey like talent. mac is barely using his size and looks like he hasn't developed all year aside from more minutes due to the other bigs failing. i know big dub doesn't care but can we get collison or pollard on the team?

To borrow a comment from I think originally Doug Collins: "Know your role, Play your role, Star in your role" . This particular team has clearly defined role for its roster. If these guys understand their roles for this season and can play and occasionally star in their roles then a long will be possible. This squad is an old school Bill Self Tulsa-like team play great defense, share the ball, score when you are in position to score and count on one another. Very fun to watch.