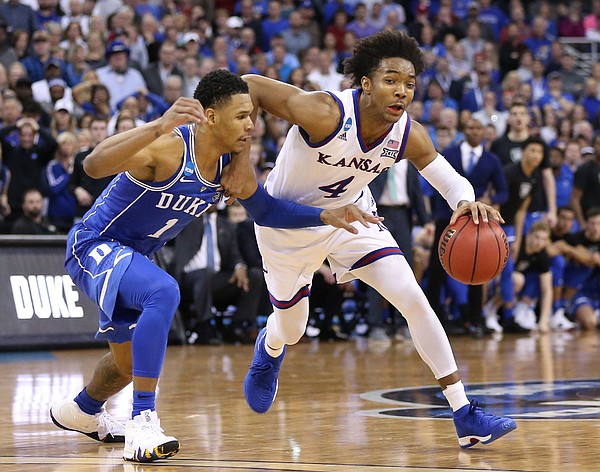 If you’re looking for Devonte’ Graham these days, he’s most likely inside an NBA practice facility, at an airport, on a plane or somewhere in between.

The four-year point guard from Kansas finds himself bouncing from coast to coast on what amounts to a debunking tour. Graham’s out on a mission to prove to every franchise willing to look at him that it’s OK to draft a proven college graduate over a less experienced prospect who may — or may not — have upside.

After working out for Washington in the nation’s capital on Wednesday, Graham, a 23-year-old prospect in a draft class full of younger players, challenged the notion that college basketball veterans have peaked before they even arrive in the NBA.

“I feel like every year in the league people develop,” Graham told a group of reporters. “Like LeBron’s playing his best game right now in his 15th year in the league. So I don’t think (age) has anything to do with it.”

The All-American from KU pointed to the 30th overall pick in the 2017 draft, four-year Villanova standout Josh Hart, as a recent example of a seasoned college player helping a team immediately. Hart shot 46.9% from the floor, 39.6% on 3-pointers and averaged 7.9 points and 4.2 rebounds as a rookie with the Los Angeles Lakers.

“You can always develop your game and get better,” Graham said. “No matter how long you was in college.”

On ESPN’s most recent mock draft, Graham, projected as the No. 43 overall pick, is the second-oldest player listed — younger than only TCU forward Kenrich Williams, by a couple of months. ESPN’s top 100 list includes just two other players older than Graham: Colorado’s George King (24) and Cincinnati’s Gary Clark (born 3 months before Graham).

With those few extra years of basketball and life experience comes wisdom. Graham didn’t bring up his 3-point shooting (40.6% as a senior) or passing (7.2 assists per game while leading KU to the Final Four) when discussing what he tries to prove to NBA coaches and executives during workouts.

“Just be aggressive, show I can compete, defend,” Graham explained of his strategy. “A lot of teams know what you can do offensively. So I just try to show them the little things that help a team win.” 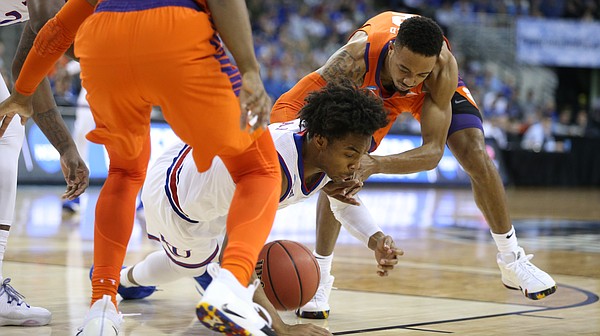 Kansas guard Devonte' Graham (4) hits the ground for a ball with Clemson guard Marcquise Reed (2) during the first half, Friday, March 23, 2018 at CenturyLink Center in Omaha, Neb. by Nick Krug

Playing four years for Bill Self helped Graham’s confidence, too, which ultimately allowed him to enter the pre-draft process at his best.

“I could just see him believing in me, so I believed in myself a lot more,” Graham related, while getting into what molded him into the player he has become. “Just having that chip on my shoulder like I have something to prove. Because I was supposed to be at Appalachian State. So I just carried that with me and took it to the gym every day.”

Self, Graham added, “definitely” required much from him as a point guard.

“But he felt like I was one of the best leaders, so he demanded a lot more out of me,” Graham added.

KU’s most recent Big 12 Player of the Year called upon his predecessor, Frank Mason III, for advice before embarking on his workout and interview journey. Like Mason, who became the 34th pick in the 2017 draft, Graham will have to take care of his body in the weeks ahead while jetting to and from a long list of destinations.

Graham worked out for Chicago on Monday and the Wizards on Wednesday, and will do the same with Phoenix Friday. Atlanta, Houston, Memphis and many other teams remain on his docket.

Washington owns the 44th pick in the draft, a spot where Sports Illustrated’s mock draft predicts Graham could end up.

“I like the way they play,” Graham said of the Wizards, a team led by star guards John Wall and Bradley Beal. “That’s the way we tried to play at Kansas. Fast. They’ve got good guards that can handle it, pass it, shoot it. I feel like I can do that pretty well. Just come off the bench and do my role.”