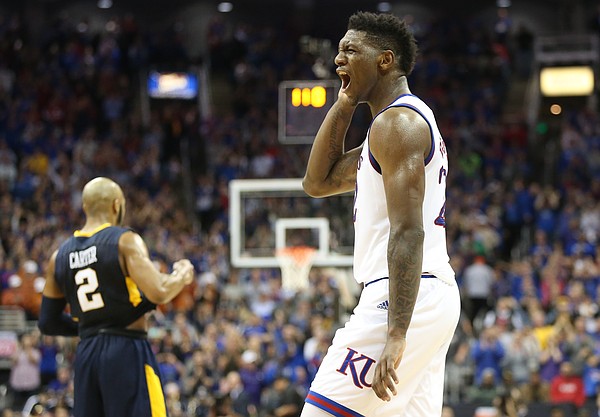 Kansas forward Silvio De Sousa (22) celebrates following the JayhawksÕ 81-70 win over the Mountaineers in the championship game of the Big 12 Tournament, Saturday, March 10, 2018 at Sprint Center in Kansas City, Mo. by Nick Krug

Whenever Udoka Azubuike returns to the Kansas basketball rotation — whether it’s Thursday against Penn, in the first round of the NCAA Tournament, or in the days that follow — the No. 1 seed in the Midwest region will essentially roll out an updated version of itself, with noticeable upgrades both in the paint and on the perimeter.

The KU team that captured the league’s postseason tournament crown in Kansas City, Mo., didn’t benefit from one second of Azubuike.

The Kansas team trying to navigate its way to the 2018 Final Four should be able to throw Azubuike, De Sousa and a suddenly-high-scoring Malik Newman at opponents, possibly as soon as the first round.

“Now on the scouting report it’s not just going to be me, Svi (Mykhailiuk) and Udoka (Azubuike), Malik,” Graham said. “It’s going to be Silvio — they’re going to have to guard everybody. When you’ve got five guys out there that can be in attack mode it’s hard to guard that. It’s perfect timing and the perfect time for them to get hot.”

Newman, a sophomore guard who transferred from Mississippi State, enters his NCAA Tournament debut (1 p.m. Thursday, on TBS) having just averaged 24 points per game on 15-for-22 3-point shooting at the Big 12 tournament.

His explosive three-day-long performance followed back-to-back single-digit scoring games to close the regular season. Now those ineffective outings seem as if they transpired months ago, instead of occurring in the previous two-plus weeks. 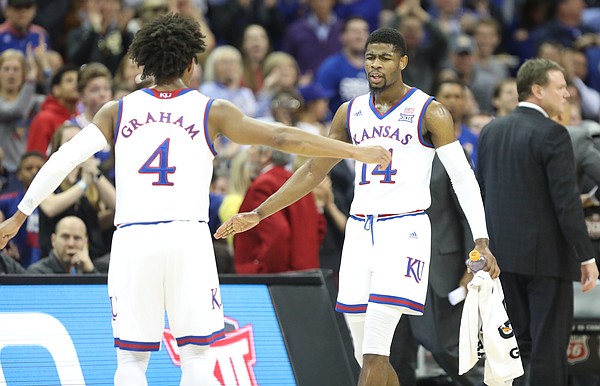 “I feel like I’m playing at a very high level,” Newman said. “That’s just thanks to my teammates and the coaching staff. Those guys had confidence in me throughout the year, no matter if I was at my lowest or at my highs. They’ve just always said, ‘Be aggressive and things are going to be fine.’ So credit to those guys for rallying around me and keeping me high.”

Similarly, De Sousa’s teammates always trusted he eventually would bloom and begin playing to the potential of a five-star prep prospect — even though he arrived in Lawrence during the middle of the campaign, in late December, as an early high school graduate.

“He’s been working so hard in practice,” Graham said of the 6-foot-9 backup forward, who played sparingly for KU in January and February, “and going through ups and downs. Learning all the plays in two months is extreme for him. He’s just been battling and it’s starting to pay off.”

Graham could see it coming. It just so happened everything began clicking for De Sousa when KU needed him most, with Azubuike out of the lineup in Kansas City, due to a left-knee injury. Even before De Sousa averaged 10 points and 9.7 rebounds at the Big 12 tournament, KU’s team leader witnessed the young big “grinding” at practices, arriving early and spending extra time studying video with assistant coach Norm Roberts. 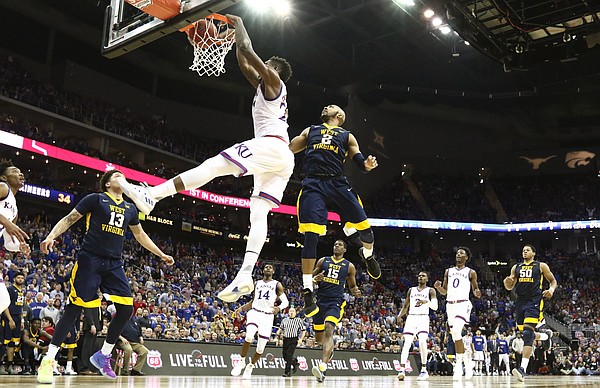 Kansas forward Silvio De Sousa (22) dunks off of a lob jame during the first half, Saturday, March 10, 2018 at Sprint Center in Kansas City, Mo. by Nick Krug

“At any point in time we knew he was going to have a breakout game, and it was the perfect time with Dok being out,” Graham added, “so his confidence should be high. Sky high.”

Newman left K.C. this past weekend impressed with De Sousa the player and the man, praising the freshman’s character and speaking of the way he seemed to respond to any and all adversity with a smile and positive attitude.

“Each day he just tried to learn. Whenever he messed up he would just go ask coach. ‘Coach, what do I need to be doing? Did I do this right?’ Things like that. We knew sooner or later he was gonna turn the corner,” Newman shared. “Not too long ago in the regular season I remember saying that Silvio, he was on the porch, but he’s not in the house yet, as far as him just being comfortable. But I think this tournament, I think it really helped him and let him know that we’ve got confidence in him to go out and play.”

De Sousa brought energy to KU’s frontcourt in the Big 12 championship game, and made impactful plays to help the Jayhawks win without their starting 7-footer, Azubuike. In doing so De Sousa looked completely different from the freshman whom coach Bill Self hesitated to keep checked into games for more than a minute or two as recently as a month ago.

“I’m not gonna lie, when I came here out of high school I knew it was going to be hard,” De Sousa said. “And I just believed in myself and just tried hard during practices. Now, months later, I’ve actually got my confidence up. Today I finally can play a lot better than I used to.”

When Azubuike returns to the floor, Graham thinks Kansas (27-7) will have an even more dynamic team to unleash in the NCAA Tournament, now that De Sousa has proven he can produce and play with confidence.

Whether March brought out the best in De Sousa and Newman or the emerging Jayhawks just have impeccable timing, Newman isn’t ruling out the idea of another KU player stepping to the forefront soon.

“Svi could’ve stepped up, Lagerald (Vick) could’ve stepped up and did what I did,” Newman said of carrying the offensive load this past weekend. “Or instead of Silvio playing how he played, Mitch (Lightfoot) could’ve played like that. I don’t think it’s just me and him. It was one man goes down, one man step up.”

Malik, Thank you for choosing Kansas, though sitting out sucked, thank you for the having the courage to wait your turn. Now we need you to up your game even more to help take us to that Promised land we Kansas Fans crave. Get us 25+ every game,

Nice humility to recognize that each of his teammates could have gone off as well. Each player needs to be in attack mode whether it results in points rebounds steals floor burns or some other less tracked stats.

Svi could. Vick and Mitch are different, though. They need to be guided, thus, they won't be able to create their own shots. Vick has to do more like Josh Jackson, finding a hole with his quickness moving without ball - so other guards can throw lobs to him. Fake his shots more.

Mitch has got to learn how to set screen and ROLL instead of stuck as a screener. He has to be confident in shooting a jumper if he's open, rather than just passing the ball. Defensively, though, he causes charge calls more than anybody else in the team.