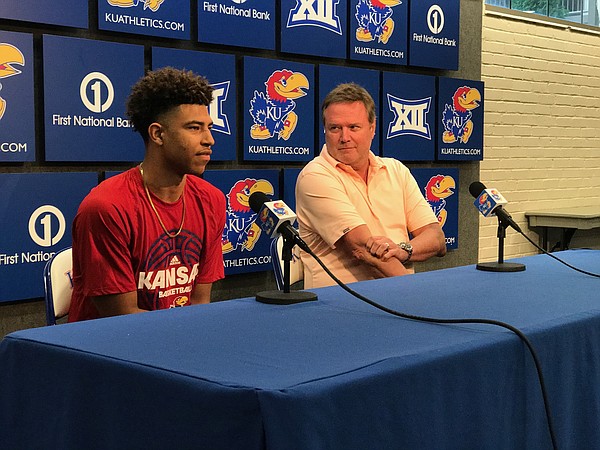 University of Kansas freshman guard Quentin Grimes and basketball coach Bill Self discuss their recent involvement with USA Basketball during a press conference on June 19, 2018, inside Allen Fieldhouse. by Benton Smith

Considering the 2018 draft concluded just a week ago, it’s still difficult to picture second-round picks Devonte’ Graham and Svi Mykhailiuk playing in their respective new NBA uniforms instead of the University of Kansas jerseys and shorts they sported every time they hit the court the past four years.

So perhaps now is as good a time as any to start preparing yourself for the idea of incoming freshman Quentin Grimes swapping his KU gear for an NBA fit next summer.

A 6-foot-5 combo guard from The Woodlands, Texas, Grimes, of course, hasn’t declared himself a one-and-done talent yet.

But all early indications point toward him becoming a lottery pick in 2019.

Twelve months out form the next NBA Draft, mock projections from multiple outlets list Grimes, coming off an MVP performance at the FIBA Americas U18 Championship, as a top-10 prospect.

According to six different mock drafts, Grimes’ current value ranks somewhere between the fourth- and 19th-best player to potentially be available, and most have him coming off the board before the 10th pick:

According to SI’s Jeremy Woo, Grimes checks “all the boxes” for a combo guard.

“Grimes has a nice mix of positional size, ball-handling ability and passing feel and is ready for the college level,” Woo wrote. “He has impressive coordination for his size and finishes pretty well around the rim. He stands to be more aggressive defending and imposing his will on the game in all facets, and appears to need the ball in his hands to thrive right now. His 3-point shot is also a little shaky at times. As long as Grimes rises to the occasion at Kansas, the lottery should be within reach.”

That breakdown falls in line with what KU coach Bill Self said about the freshman guard, upon returning to Lawrence from their gold-medal trip to Canada, in June. The 18-year-old Grimes hasn’t yet played a game for the Jayhawks and Self already called him “probably as complete a guard as we’ve ever had.”

At this point, though, no other Jayhawks project as first-round prospects for 2019.

While not every mock draft includes a second-round forecast, ESPN classified junior-to-be Udoka Azubuike, who dipped his large toes into the NBA waters this past spring, as the No. 48 potential draftee.

SI doesn’t include KU’s 7-foot center on its list, but does give 6-9 forward Dedric Lawson a spot near the middle of the second round, at No. 42.

“While not an exceptional athlete, Lawson has been highly productive on both ends of the glass and around the basket,” Woo wrote of the transfer from Memphis, who will make his KU debut this coming season, “and has shown inconsistent but functional set shooting touch from outside. He could be in position for a big year as part of what’s essentially a brand new Jayhawks rotation, and should be able to rejuvenate his draft stock in the process.”

Grimes, Azubuike and Lawson all will have plenty of opportunities to improve — or hurt — their stock in the months ahead, and it shouldn’t surprise anybody if all three ultimately decide to enter the drat next year.

KU’s 2018-19 roster might not have any seniors on it, but, as usual, you should count on the best Jayhawks exploring their NBA options and possibly deciding to leave early.

Hey Benton nice article. - -Do you remember how you all use to list how each former KU player on NBA rosters did stat wise in their games? - -what ever happened to that? - -really enjoyed on seeing how each done in their games. - -Would it be possible or could you possibly list all of our former players who are now in the NBA rosters or even G league? - would it be possible to bring back how players did in their games - would really love to keep track of these guys see how their careers are going - anyways thanks. As always ROCK CHALK ALL DAY LONG BABY

Hat's off to Gerry for this comment: ROCK CHALK ALL DAY LONG BABY!

I wonder if mock drafts at this time last year had Billy Preston listed on them.